It’s a rare Scottish summer that facilitates multiple visits to the seepy sweeps of Creag an Dubh Loch’s granite shields, but after our success on Dubh Loch Monster we were keen for more. Much scheming ensued and we eventually plotted a course for the hybrid Dinosaur/Pink Elephant (HVS) on the left hand side of the Central Slabs.

The dead-calm weather meant we were force-fed a second breakfast of midge on the cycle along Loch Muick, but the extra protein only served to speed us up and we made short work of the approach. 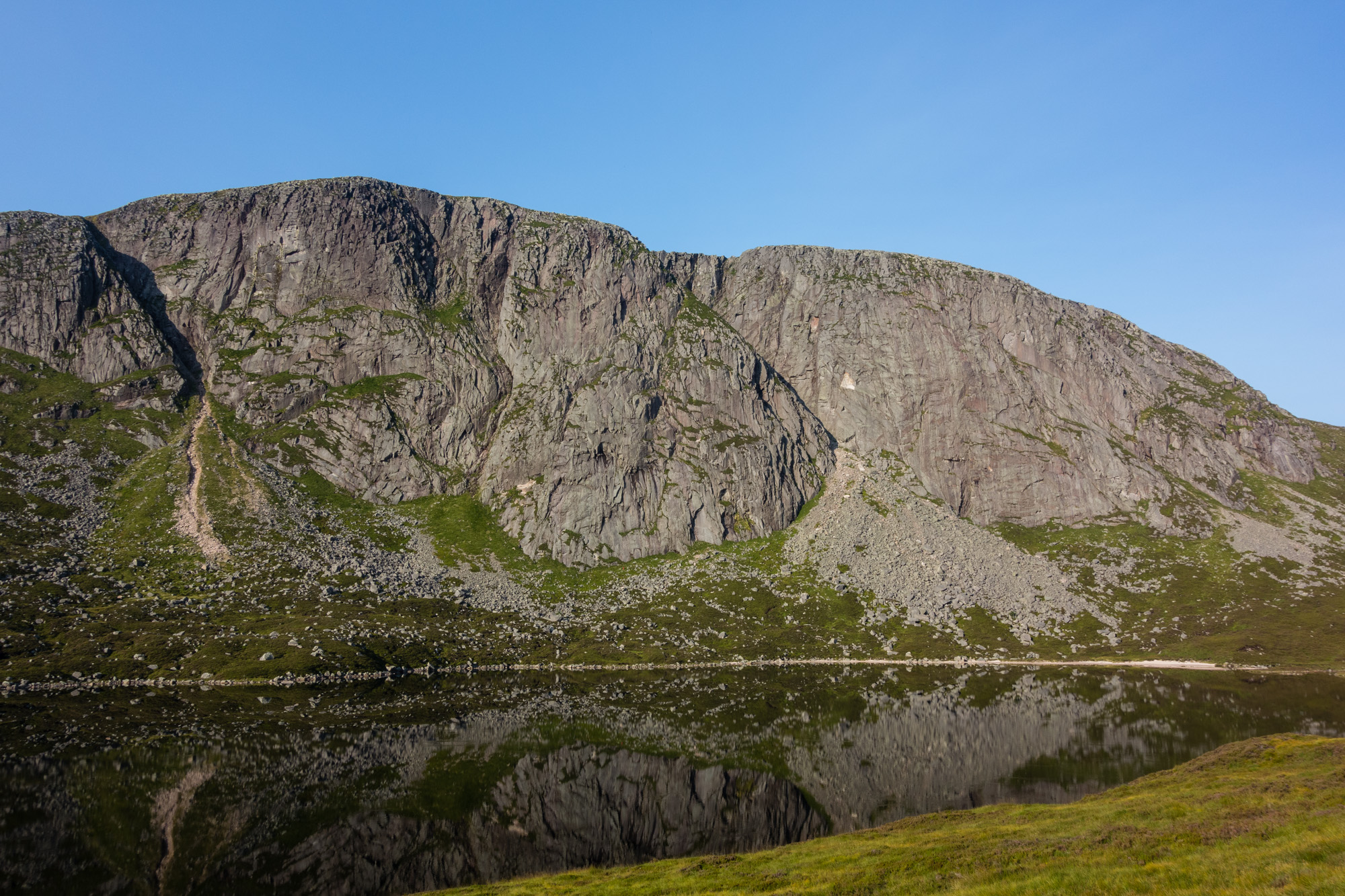 The beauty of Creag an Dubh Loch reflected in the still waters was tempered, ironically, by the midge-pocalypse resulting from the calm conditions. 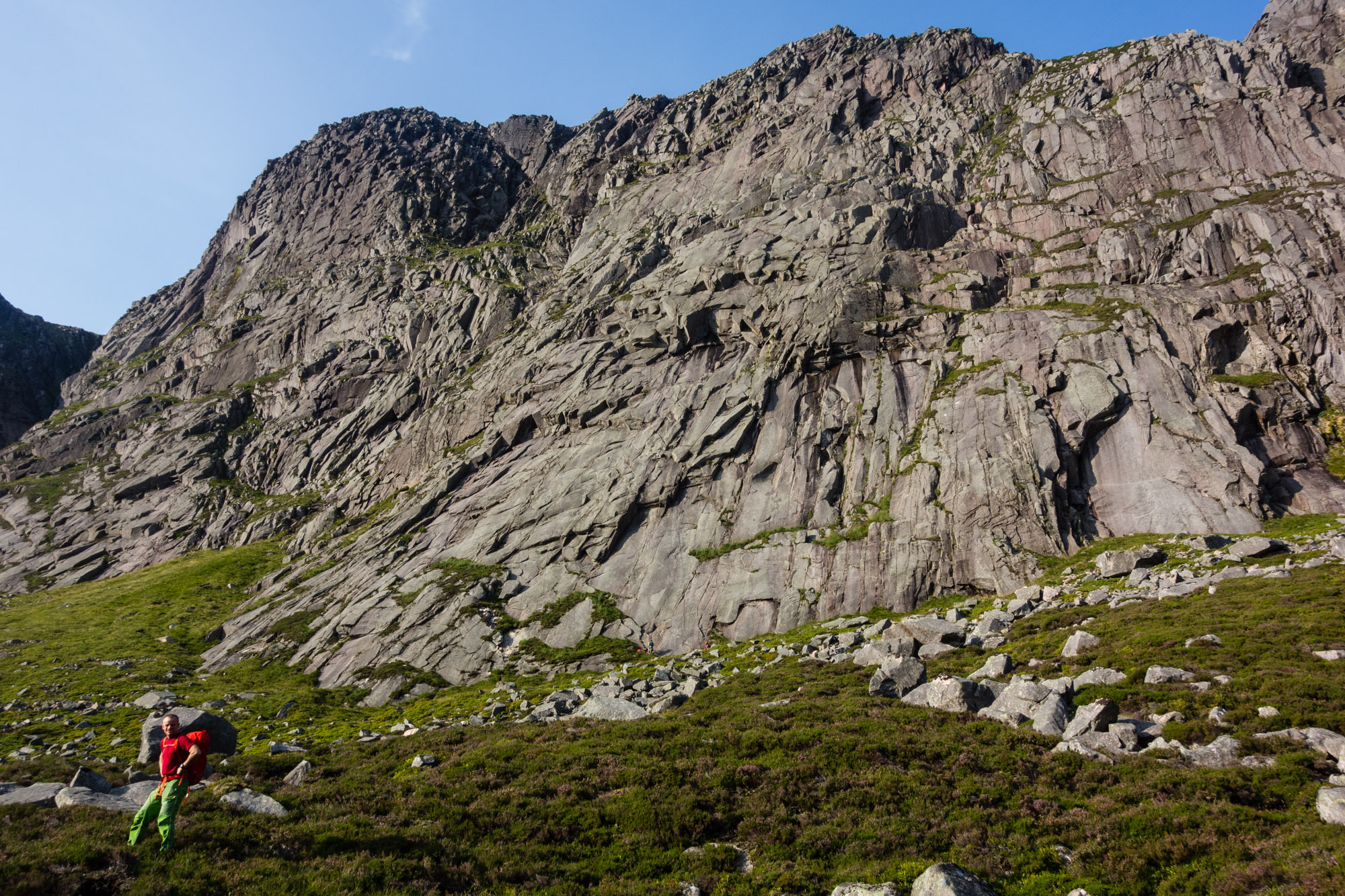 The final approach to the enormous sweep of the Central Slabs. Dinosaur begins just left of the lowermost tongue of vegetated slab and heads direct before wiggling it’s way left between the lower overlaps.

Andy ran it out on the optional first pitch to the small grass terrace, before I took over for the immaculate cracked slabs of pitch 2. The climbing was theoretically easy but in classic Dubh Loch style it required a little more thought than the lowly tech grade would suggest.

Enjoying the mellow yet interesting slabby cracks on pitch 2, with the overlaps of the lower crux looming above. Photo credit: Andy Harrison

Pitch 3 is in sharp contrast to the direct line below and involves jinking right, then back left through overlaps before a rising and then descending (!) traverse is followed to the base of a shallow corner. The corner is followed more easily to a comfy belay atop a large flake and (apparently) the junction with Pink Elephant. Given 5a in some guides, this pitch felt much harder than anything else below the big terrace and its critical to avoid going too high on the traverse, or much desperation may ensue! 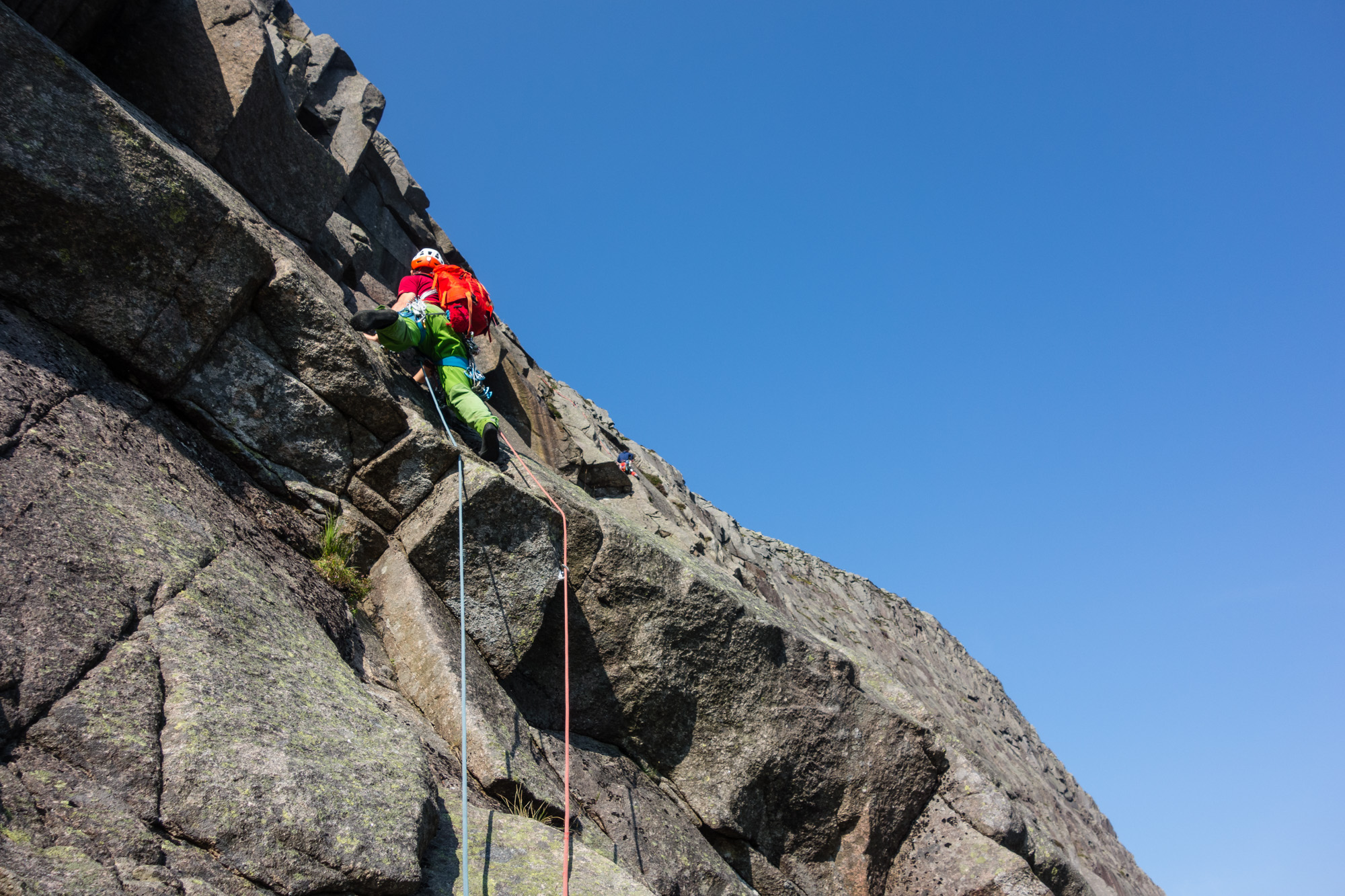 Above the first overlap on the devious and difficult pitch 3 – the awkward move described in the guide is up and left of Andy through the next overlap.

We were going well but things began to unravel slightly at this point – the description for pitch 4 sort of matched the terrain directly up from the belay, but the line on the topo bears little resemblance to it and would take the climber into terrain distinctly un-HVS looking. I went direct but found myself below a lichen-covered roof made up of booming blocks and topped by a vegetated groove. There was little in the way of signs of travel, unlike the previous pitches, so after getting very flustered trying to force the line I came back to the belay to regroup. We probed right to no avail, so cut our losses, with Andy heading quickly up the continuation of Dinosaur to re-join the line 60m higher. 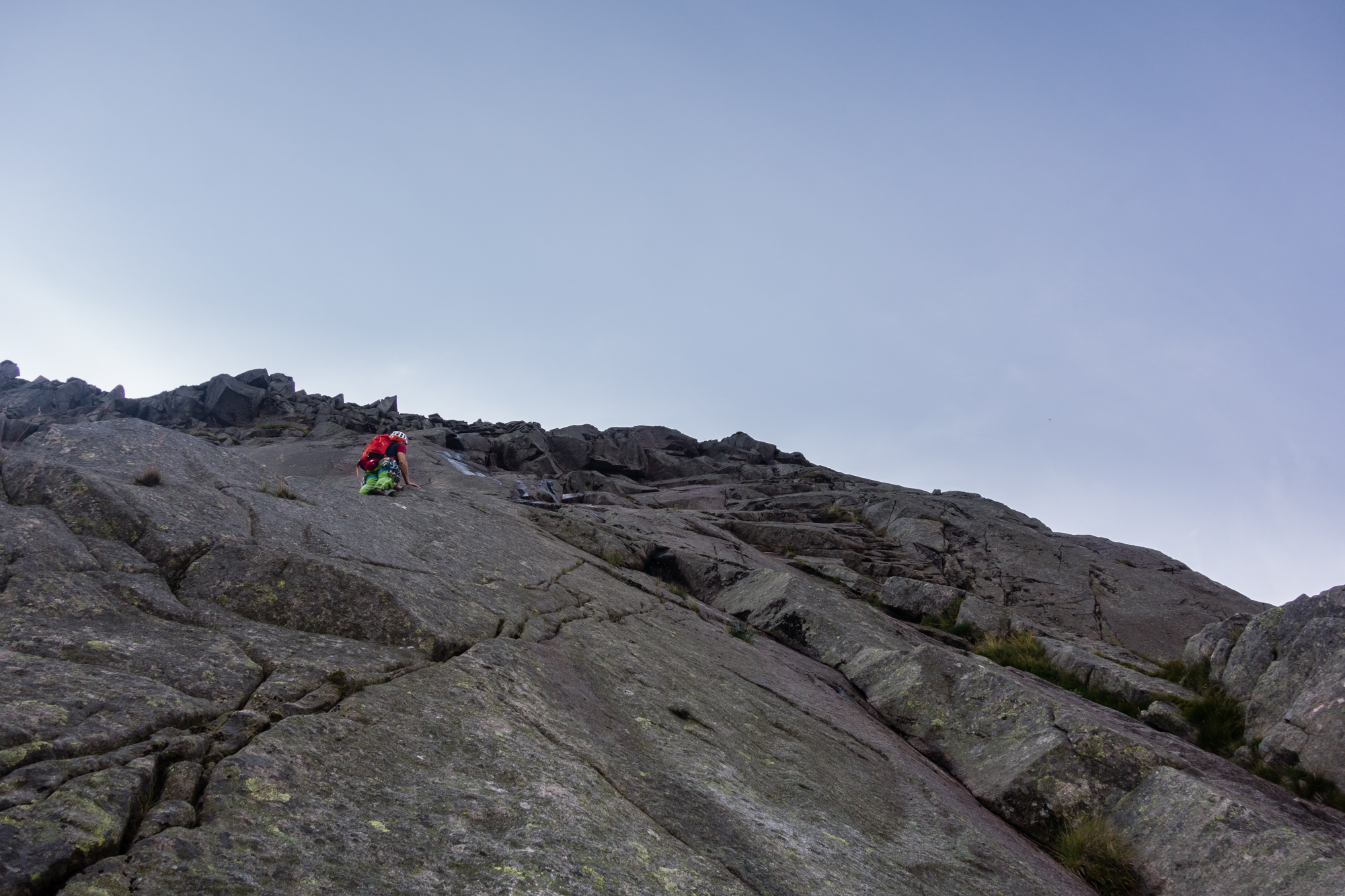 Andy on the right bounding rib of the obvious central corner above the terrace, which turned out to be a very bold pitch.

I scrabbled up a wet wall and bouldered through bulges to deposit us on the terrace below the upper walls, where we were once again befuddled by the apparent divergence of the description (obvious central corner) and topo (a line further right). We chose the big corner, which proved tricky and very bold, to belay below a sopping wet groove and slabs running with water. I again attempted to force it but was now feeling strung out and my head wasn’t in it. Luckily Black Mamba was just to our right and Andy bravely stepped up to guide us on our new course to join the upper pitches of said route and Cyclops.

Potentially the highlight of the route – Andy doing a fine job of escaping the gopping grimness of Pink Elephant and linking up with Black Mamba for a stellar pitch! 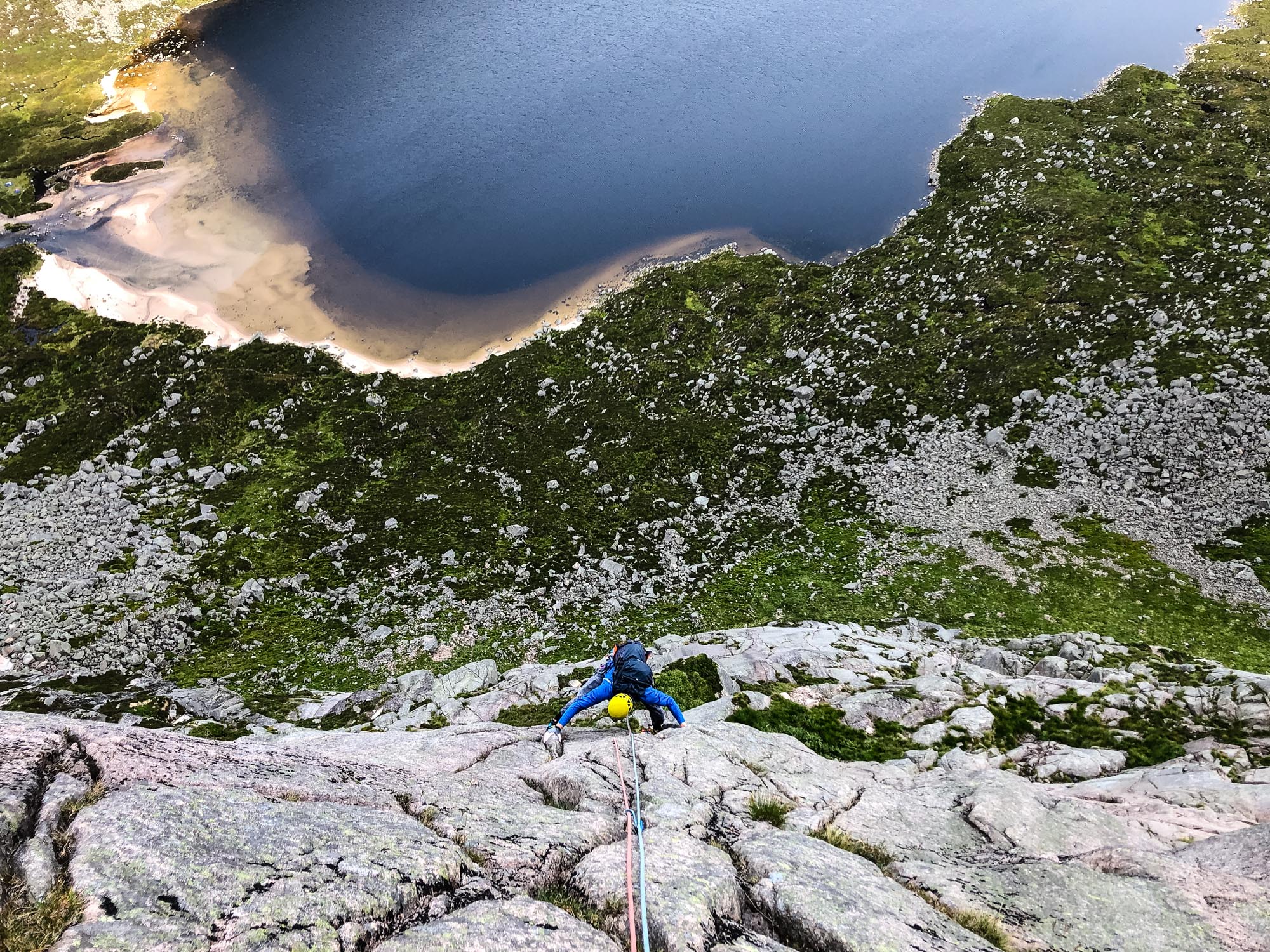 Enjoying the technical moves in the familiar flared cracks of Cyclops/Black Mamba with most of the Central Slabs sweeping away to the slopes below. Photo credit: Andy Harrison

Determined to exonerate myself (and because the next pitch is classic) I led through up the Quartz Corner, slowly but surely, and pulled out on to the right rib in an outrageous position. Easier climbing led to the belay and we topped out via more minging grooves and wet walls to finish a route which ended up being a mix of four! Despite the tribulations, most of the pitches were still mega and we’ll need to come back to finish the top pitches of Pink Elephant. We’ll probably do that by starting up another route…