Four years ago, Ric and I had a minor epic on The Pause (E1 5b), when we optimistically attempted it in damp conditions and then got lost on the psychologically taxing pitch 4. Terrifying stuff in fact. A rematch was definitely in order and despite barely doing any serious climbing through injuries and lockdowns, we were strangely full of hubris (and limoncello), so with a cracking forecast we jumped on it.

Ric makes steady progress up the (nearly) dry first pitch. It was much nicer than the harrowing heather bashing on our first attempt!

Unlike our first effort, when a truly sopping first pitch forced us left to make the first ascent (probably) of some E4 heather, we enjoyed a dry first pitch. The only wet streak was exactly where we didn’t want it – on the tricky pull out left to the higher slab.

The Coffin Stone and beyond up Glen Etive from the top of the first pitch.

Pitch 2 isn’t really in keeping with the rest of the route; being easier, shorter and containing strange features known as holds. Perfect for me basically. Once dispatched we got into the meat of the route and embarked on the fantastic crux pitch, which isn’t actually the crux. 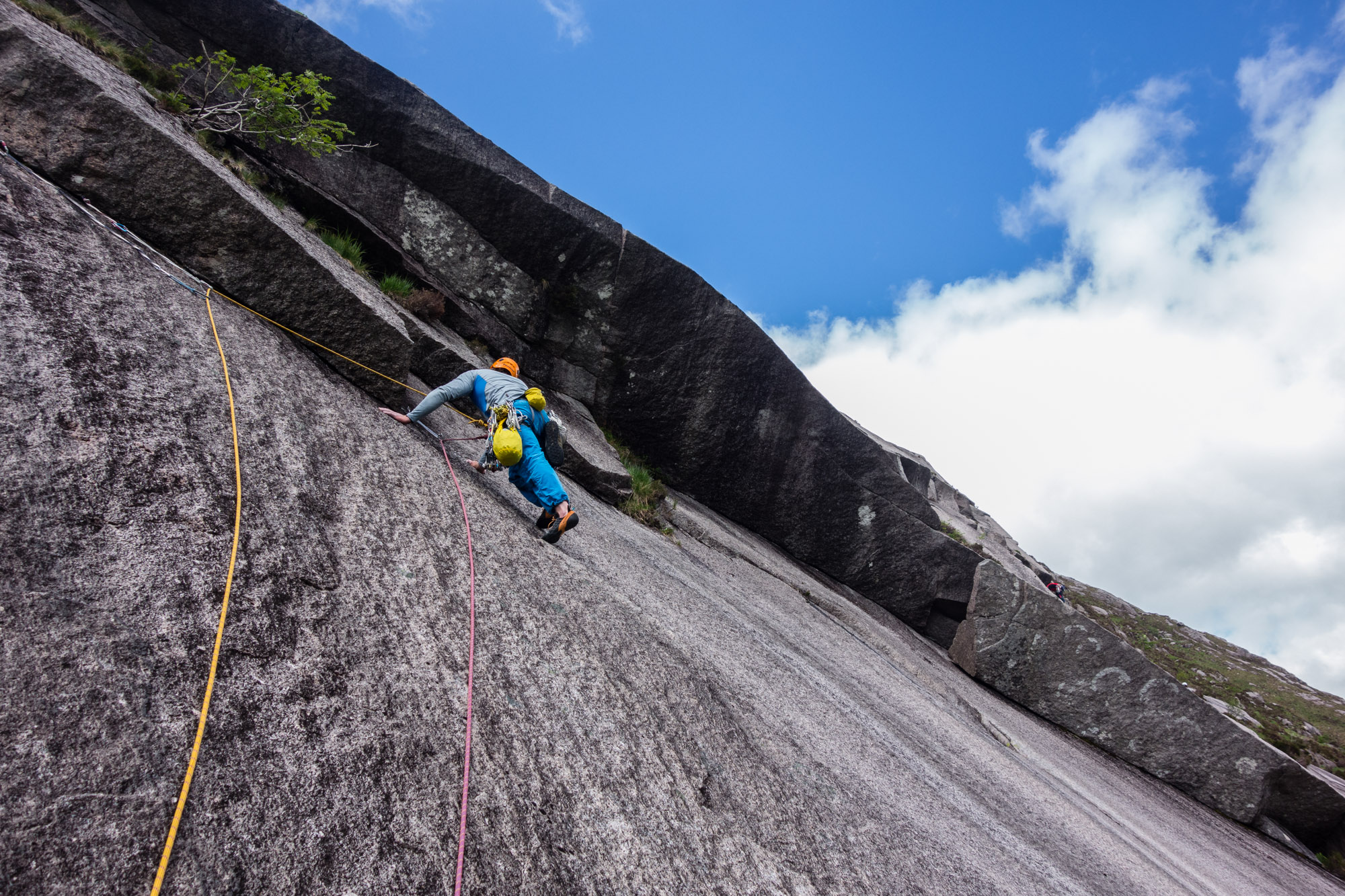 Well protected and technical – the third pitch of The Pause is a classic for good reason! 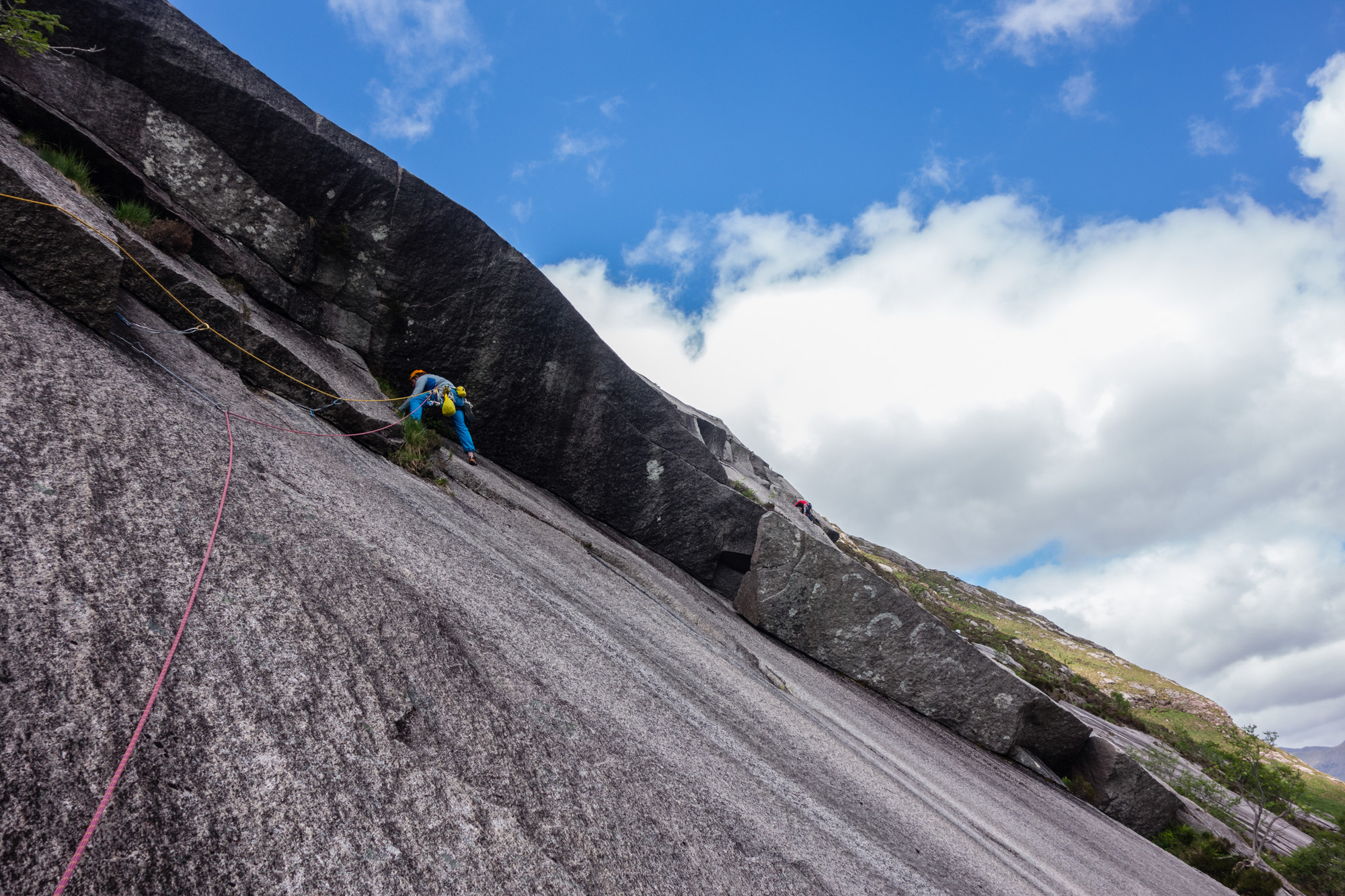 Ric arranges gear before committing to the namesake moves of the route – true friction climbing down and across the black streaks to the ledge in the crevasse.

The pitch involves a long traverse beneath a series of stepped overlaps, which provide ample runners and underclings, culminating in the “The Pause” – a brief moment of respite before a holdless, gently-descending traverse across lichen-covered smooth granite. It feels wrong, but the climber of a nervous disposition should definitely lead this pitch. I wish I had! 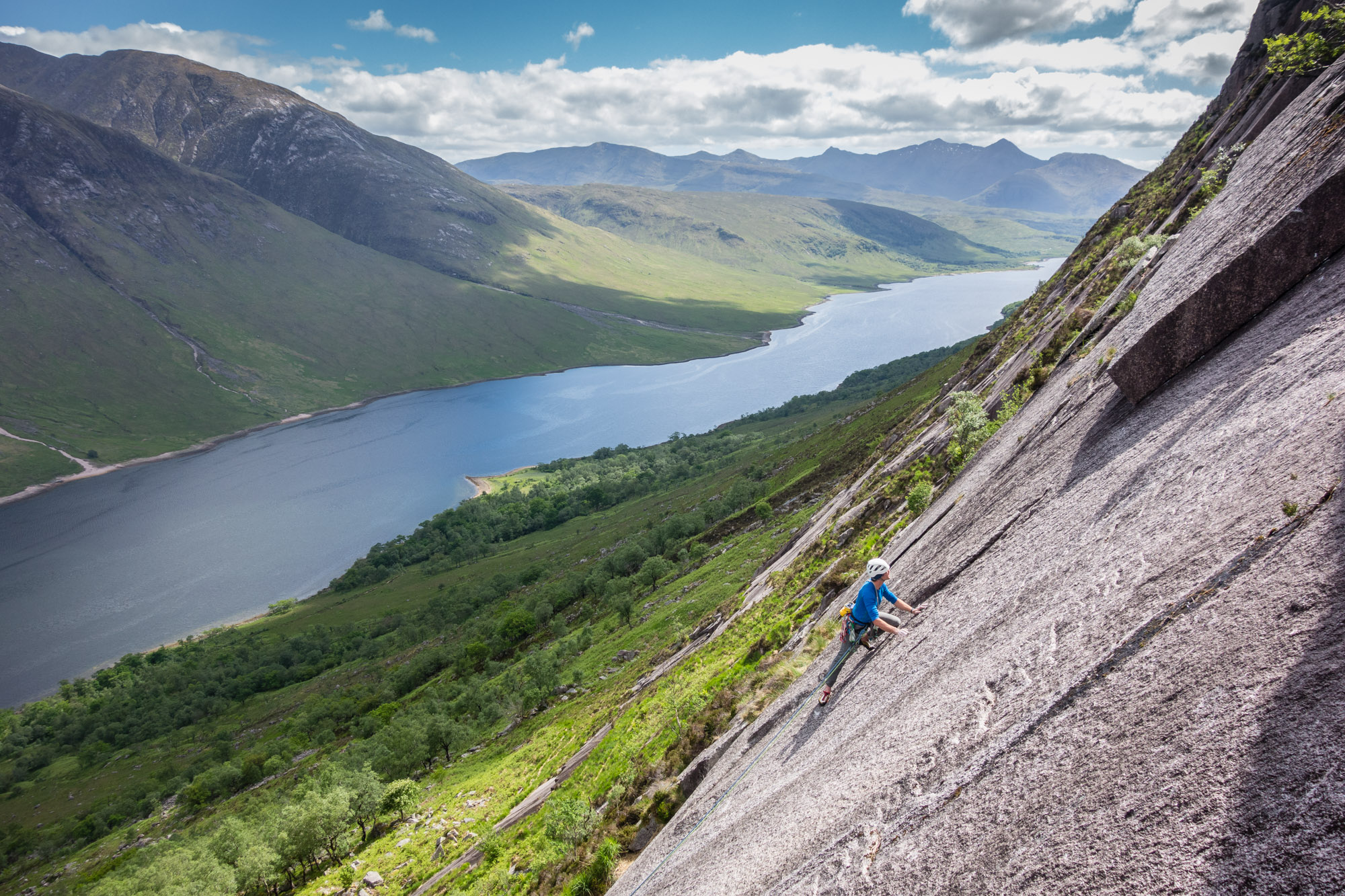 Happy climber on the immaculate second pitch of The Long Reach with views stretching down Loch Etive to Ben Cruachan.

The guidebook pitch 4 is fairly long and very lonely for the leader, being out of sight of the belayer on the bold top part. Our strategy was to split this pitch using The Long Reach belay in an effort to make communication easier and relieve some of the tension. The approach worked, but the route finding really isn’t trivial and we found it hard to rationalise the description with the terrain in front of us. 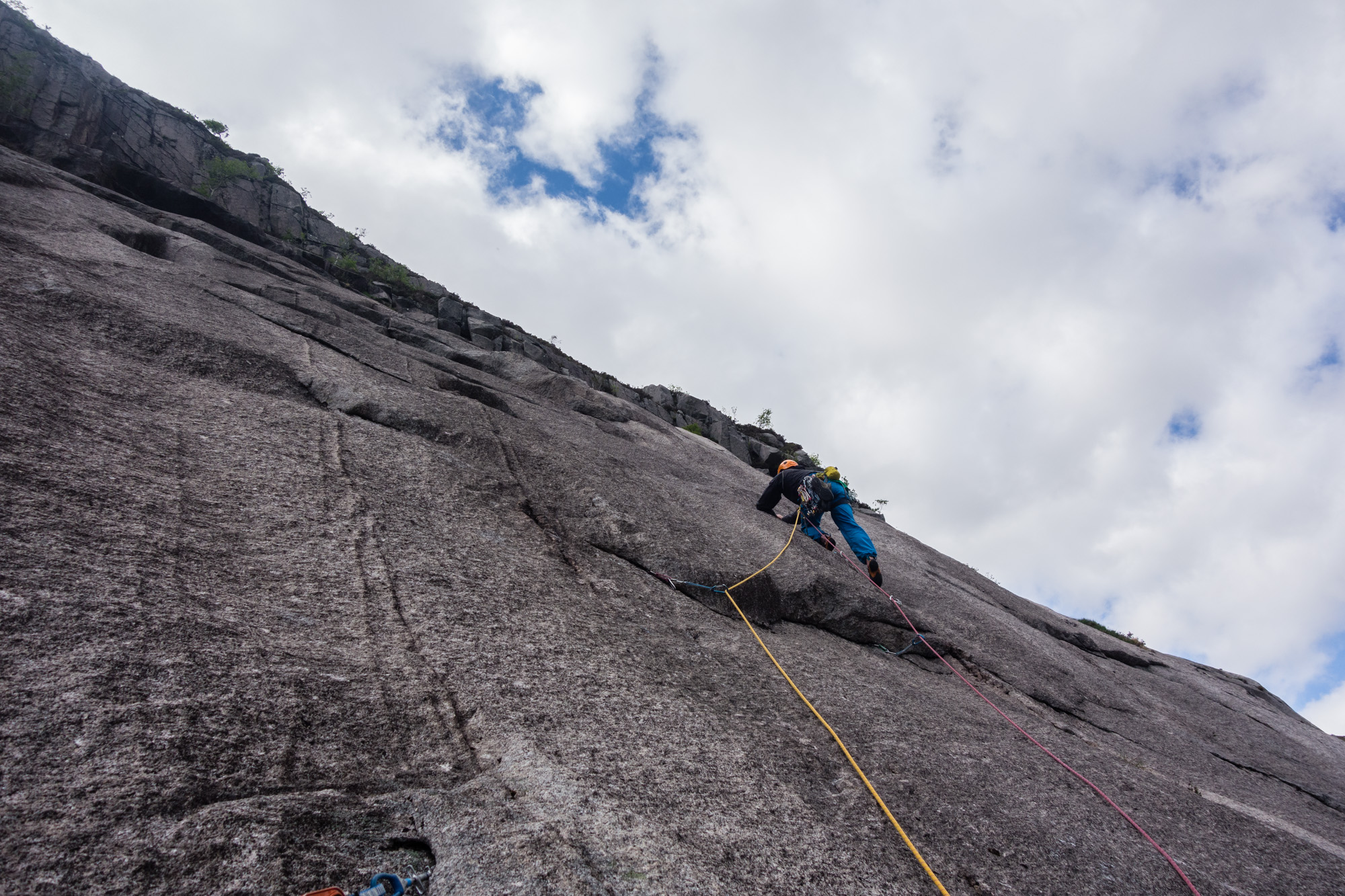 The second half of pitch 4 (our pitch 5) and where we retreated from previously. A rising leftwards line from here to the small overlap reveals gear and a relatively straight forward traverse back right to the belay. 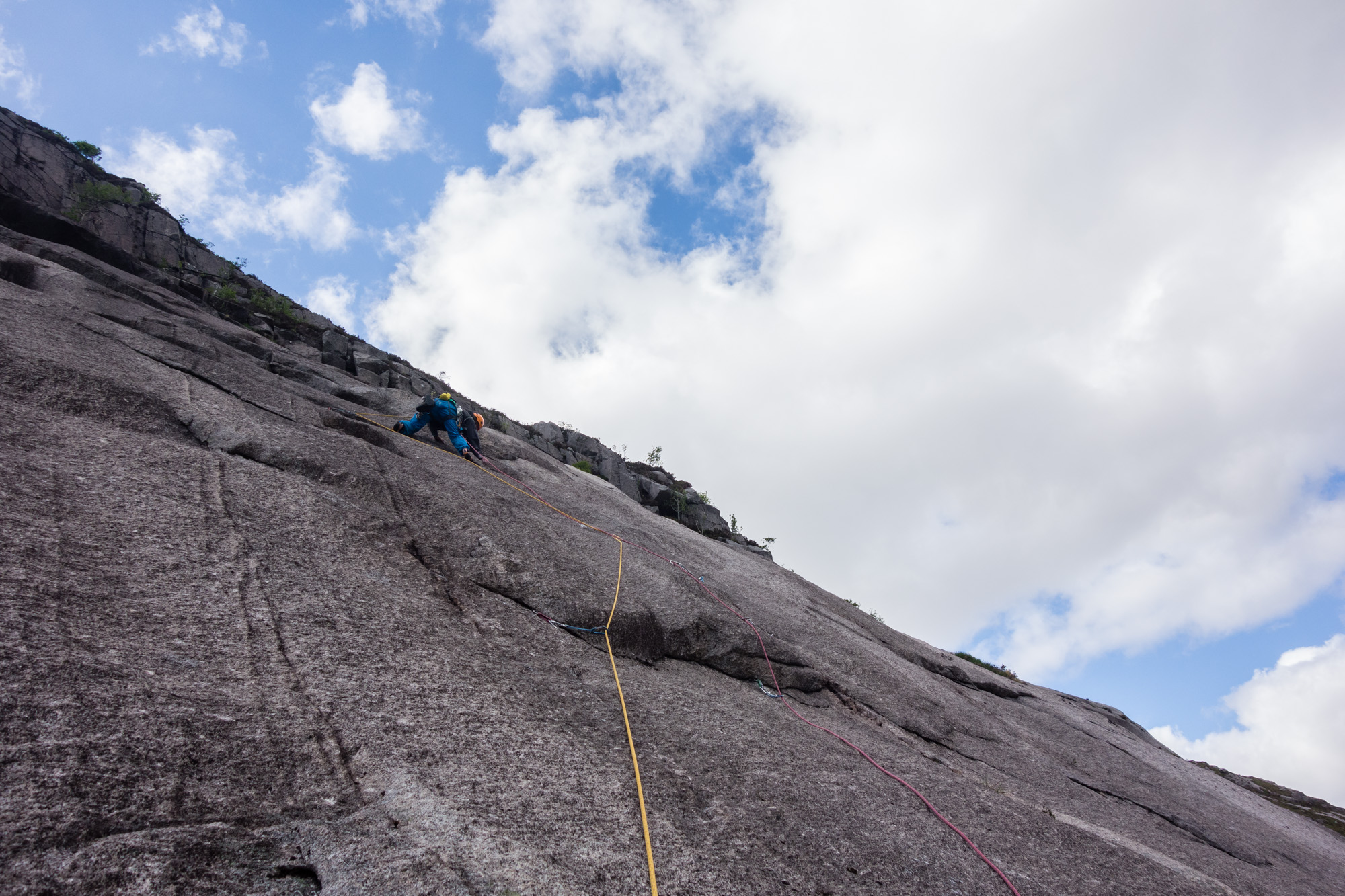 Ric finishes guidebook pitch 4 by traversing back right to where the overlap merges with the slab. We knew we’d cracked it at this point!

By this stage, hunger, dehydration and the high spice-factor had induced a mild delirium and I arrived at the belay to find we were both actually smiling. Pitch 5/6 passed in a midge-filled haze, with a tough section through a thin cracked bulge providing the drama. 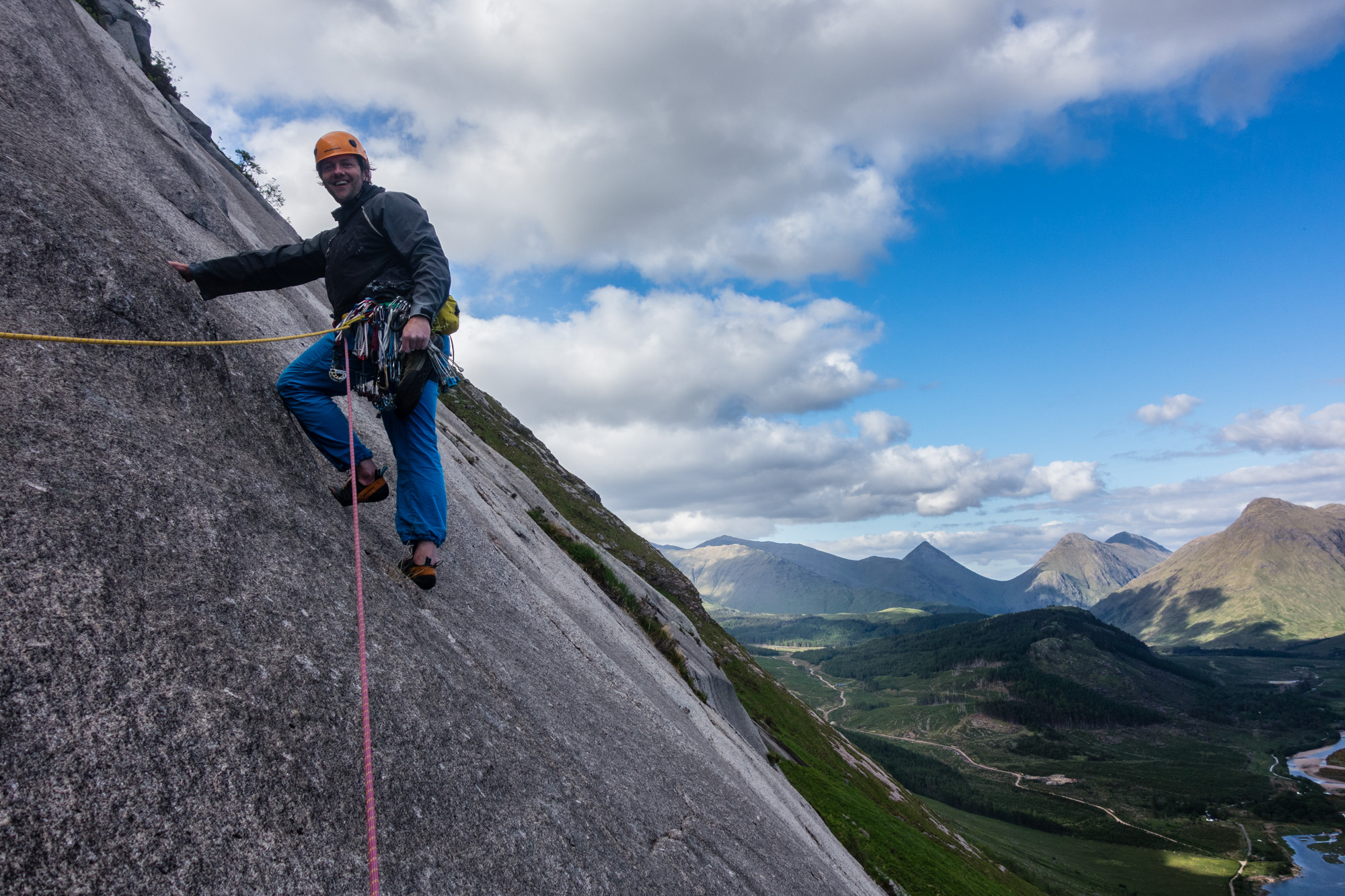 Ric all smiles and confident in our imminent success at the start of another stellar pitch of technical slabby goodness. 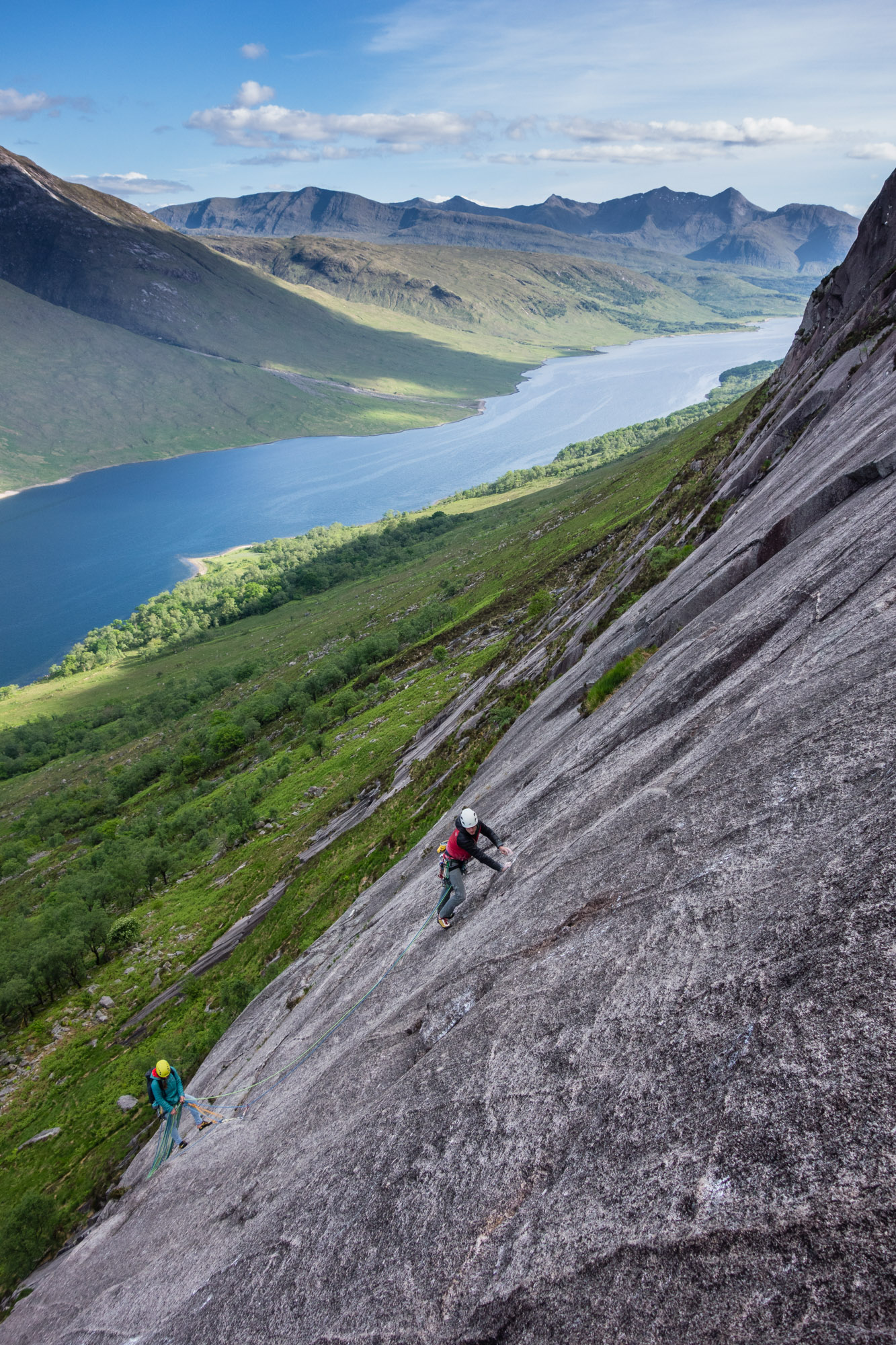 A less-happy climber contemplates the boldness and tricky route finding on pitch 4 of The Long Reach. A lovely spot to be spiced out of your tree in. 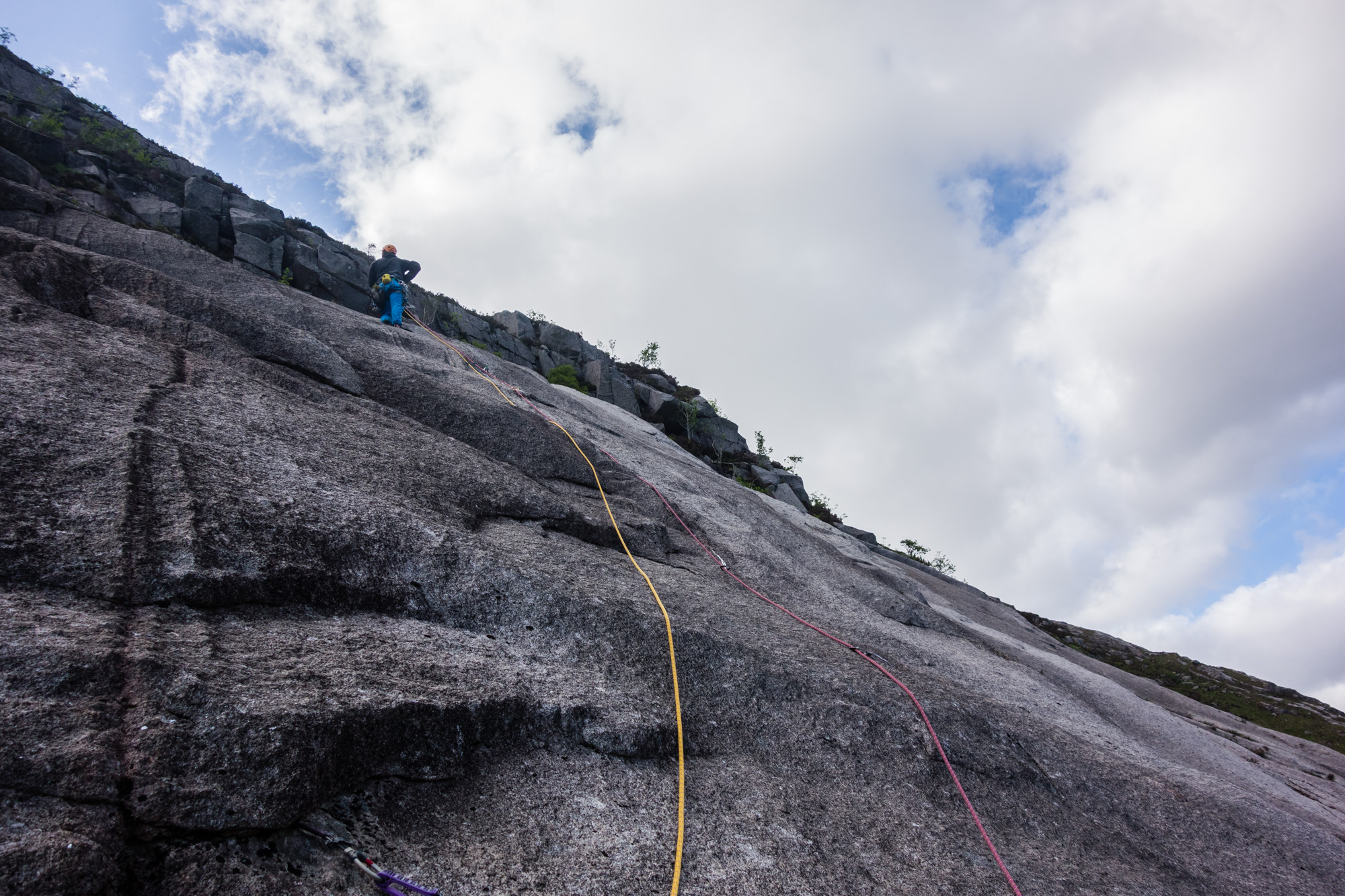 Nearing the end of pitch 5/6, Ric at home in a sea of granite.

After such a Herculean effort from Ric, I resolved to top us out and took the reigns for the last pitch, which appeared to offer more in the way of features and conventional moves. The midge situation was fairly dire by this point, so I did my best to motor up bulges, through mantels, under overlaps and up cracks to the heather terrace above the route. It was at that point the midges got really bad and combined forces with a plague of ticks. 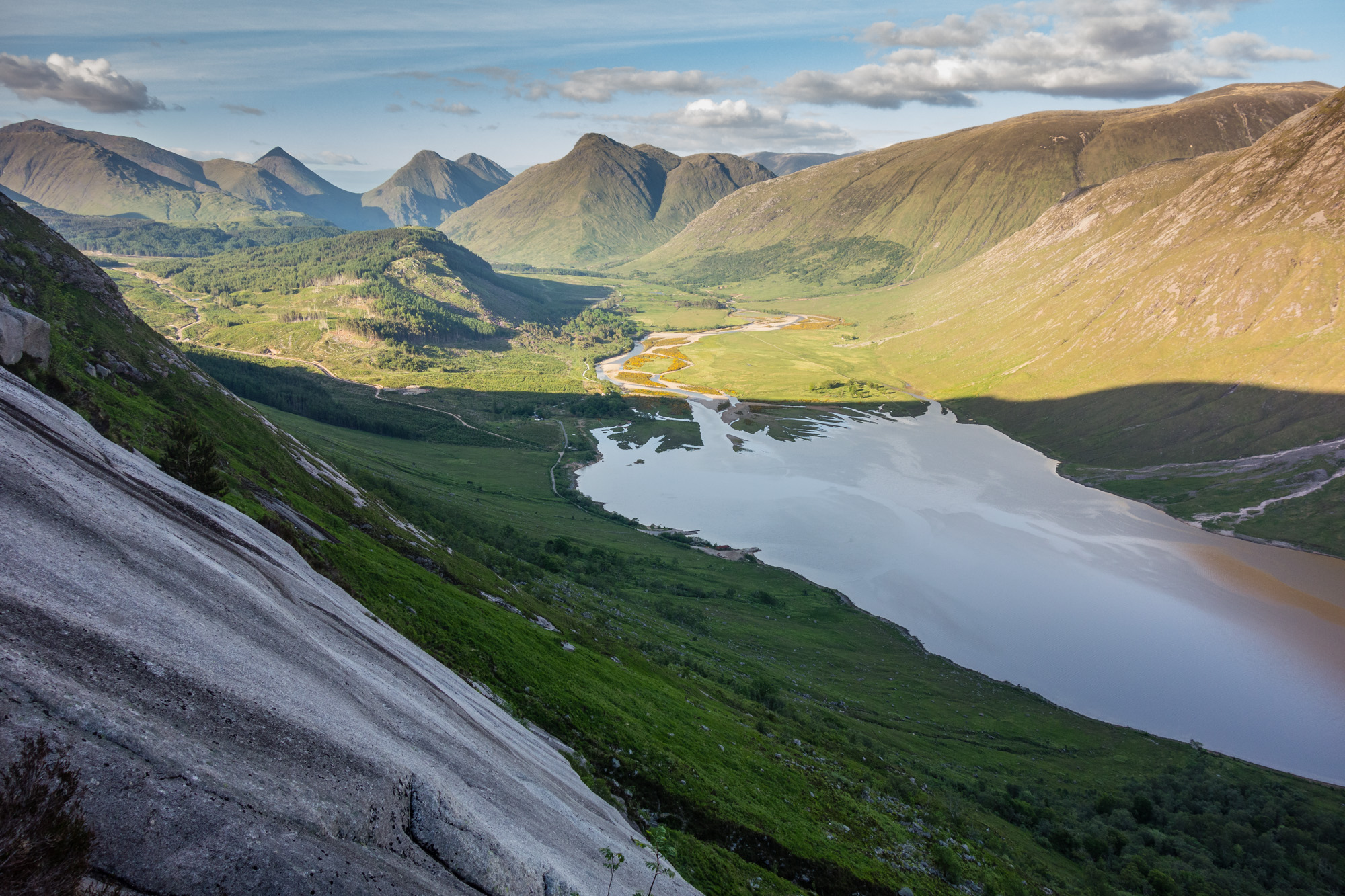 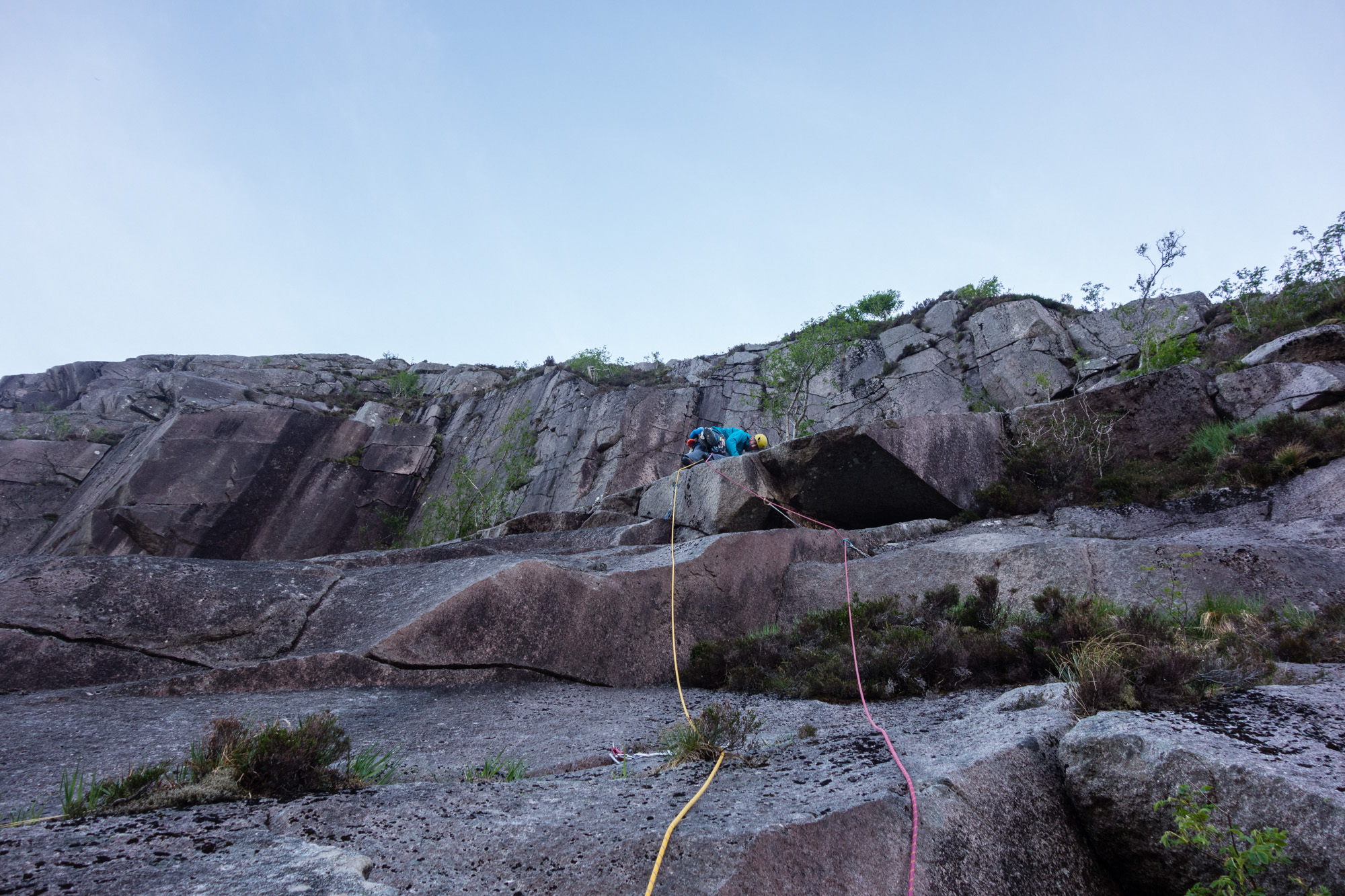 Pulling into sublime parallel cracks in the hanging slab on pitch 6/7. Lots of variety on this pitch with a tricky mantelshelf and pokey traverse left under the roof adding to the fun.

It turns out that the crux of The Pause isn’t the hardest technical climbing. For me at least it’s the sustained insecurity and constant concern that the optimum line hasn’t been followed or that protection won’t be found. No doubt this only serves to amplify the adventure and helps to define what must surely be one of Scotland’s best slab climbs! 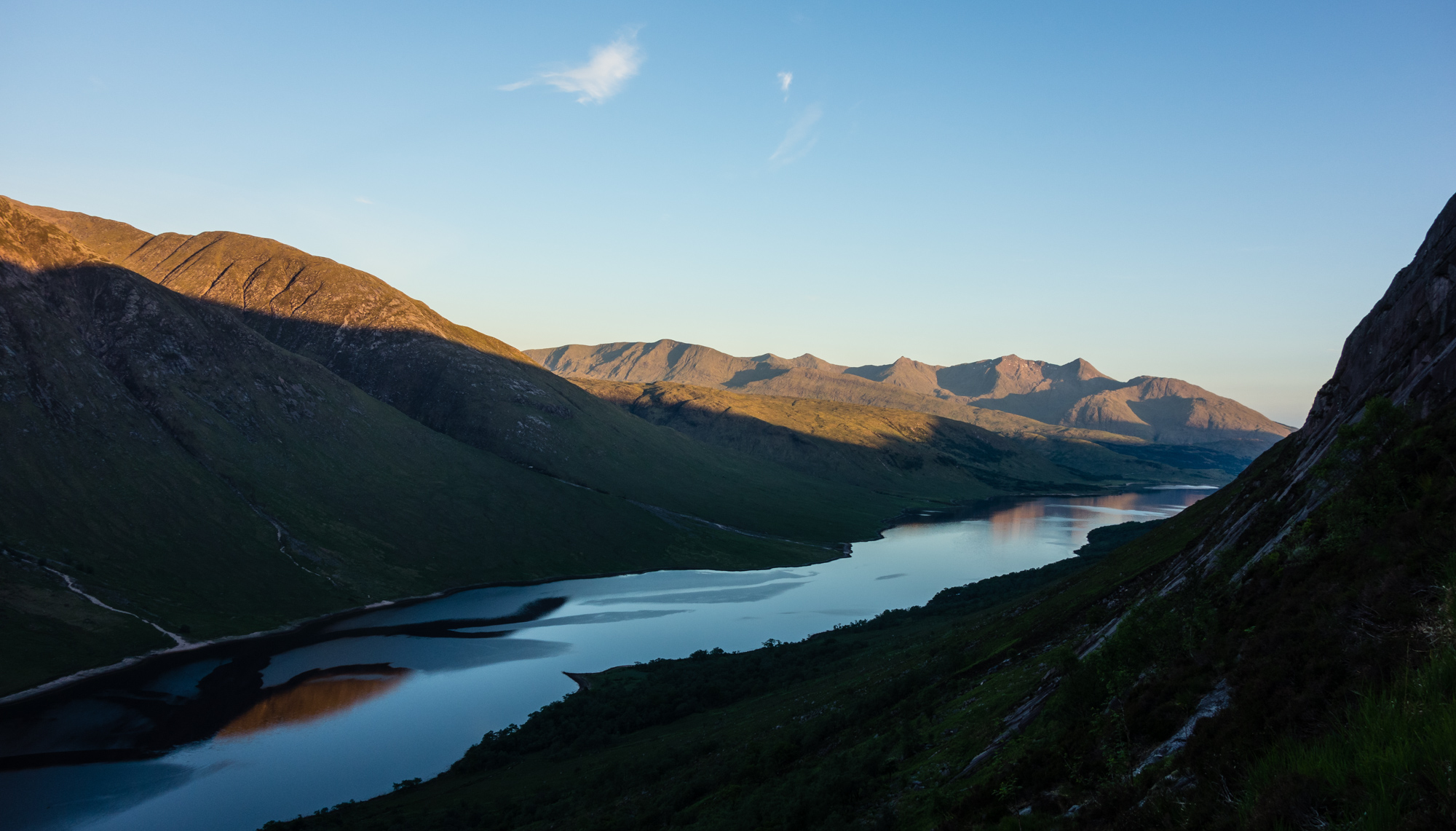 Golden hour at the end of a long, scary, midge-and-tick-ridden day. Lovely stuff!

One thought on “Less Hesitation on The Pause, Etive Slabs”