The Scottish mountains under the spell of a spring high pressure system are a special place – within two weeks we had gone from icy gullies on Lochnagar to contemplating big rock routes on Creag an Dubh Loch. Could it really be dry enough this early in the year? It had barely rained in weeks, it had to be worth a look! 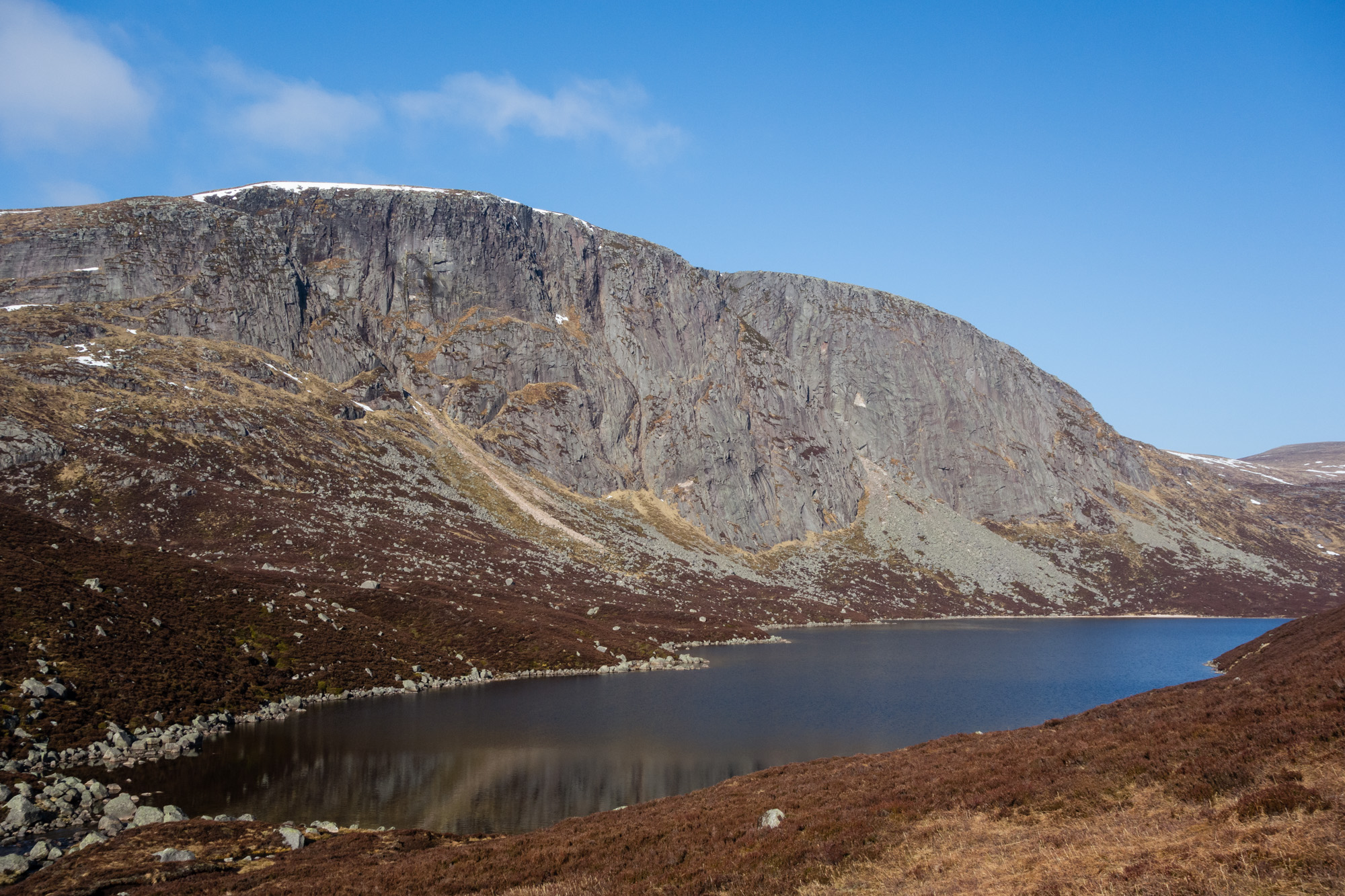 Creag an Dubh Loch in all it’s glory on a perfect spring morning! Looking very dry and very inviting from the approach path.

Indeed it was! Upon arriving at the loch, after a speedy approach on bikes, it became clear we had the run of the place; only Broad Terrace Wall suffered from lingering snow-patch seepage. Central Gully Wall looked the most appealing and Andy was yet to do a route on this amazing face, so we quickly settled on Dubh Loch Monster (E1 5c) and headed around to the route. 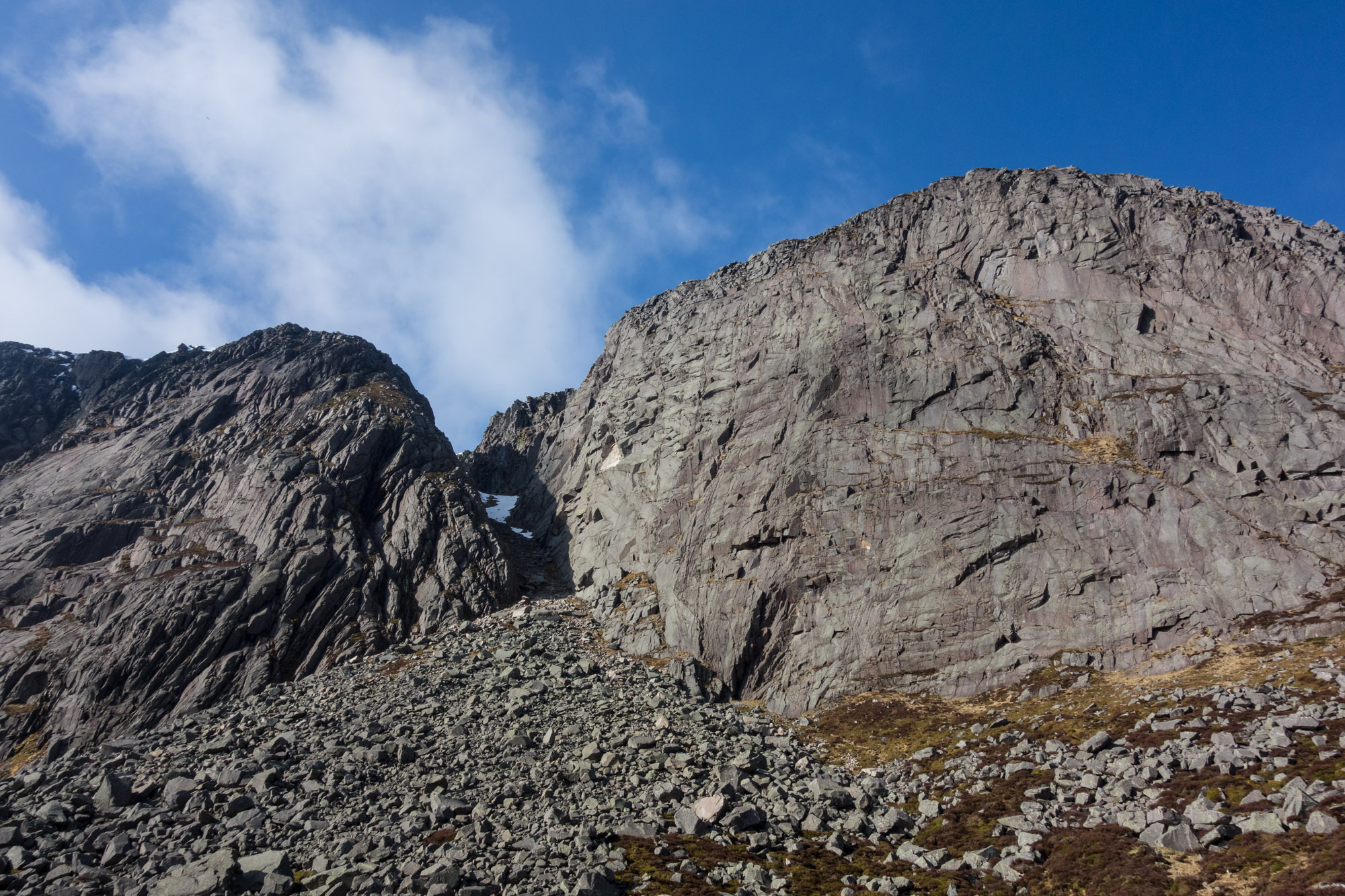 Central Gully Wall basking in the morning sunshine – Dubh Loch Monster starts up and left of the central shadowed corner of King Rat and trends left to breach the steep wall left of the King Rat roof. 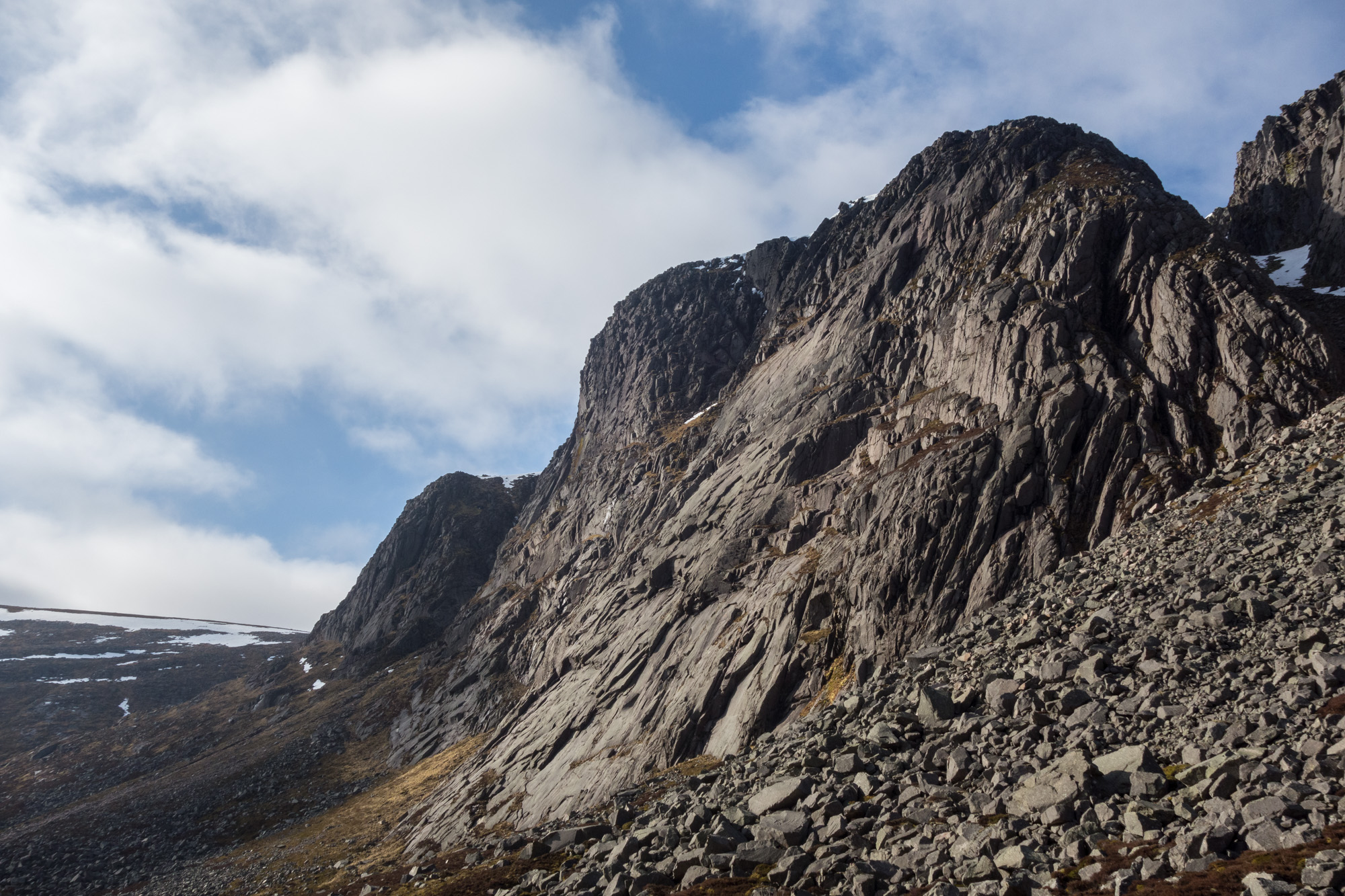 The mighty Central Slabs in very good condition – scene of our grand day out on Cyclops.

Still regretting my decision to not lead the roof on King Rat a few years ago, I was keen to do battle with the second pitch crux, so Andy got us going and motored up the grooves and slabs of the first pitch to below the steepening. We strayed on to the start of Mousetrap before breaking out right up cracks, which seemed the natural line. 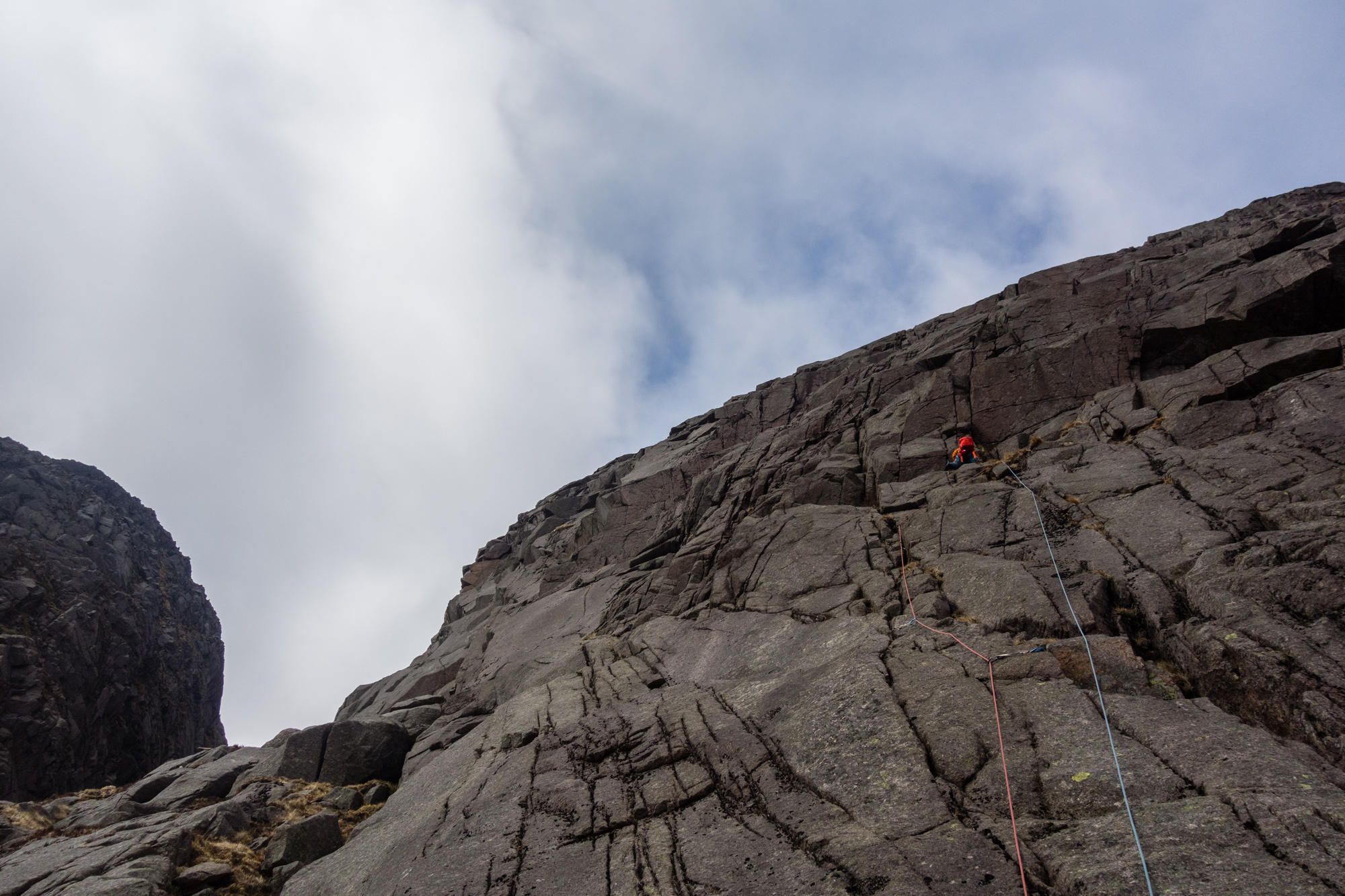 Andy arrives at the belay stance below the crux notch, after a mellow re-introduction to the delights of Dubh Loch granite weirdness.

The crux does not look difficult from below, with parallel cracks that swallow gear leading you into a short chimney-come-notch. Once committed however, it’s clear the holds are not what they appear and some strenuous contortions are required to insert yourself into the notch and grasp the ledge above – a short and sharp struggle! 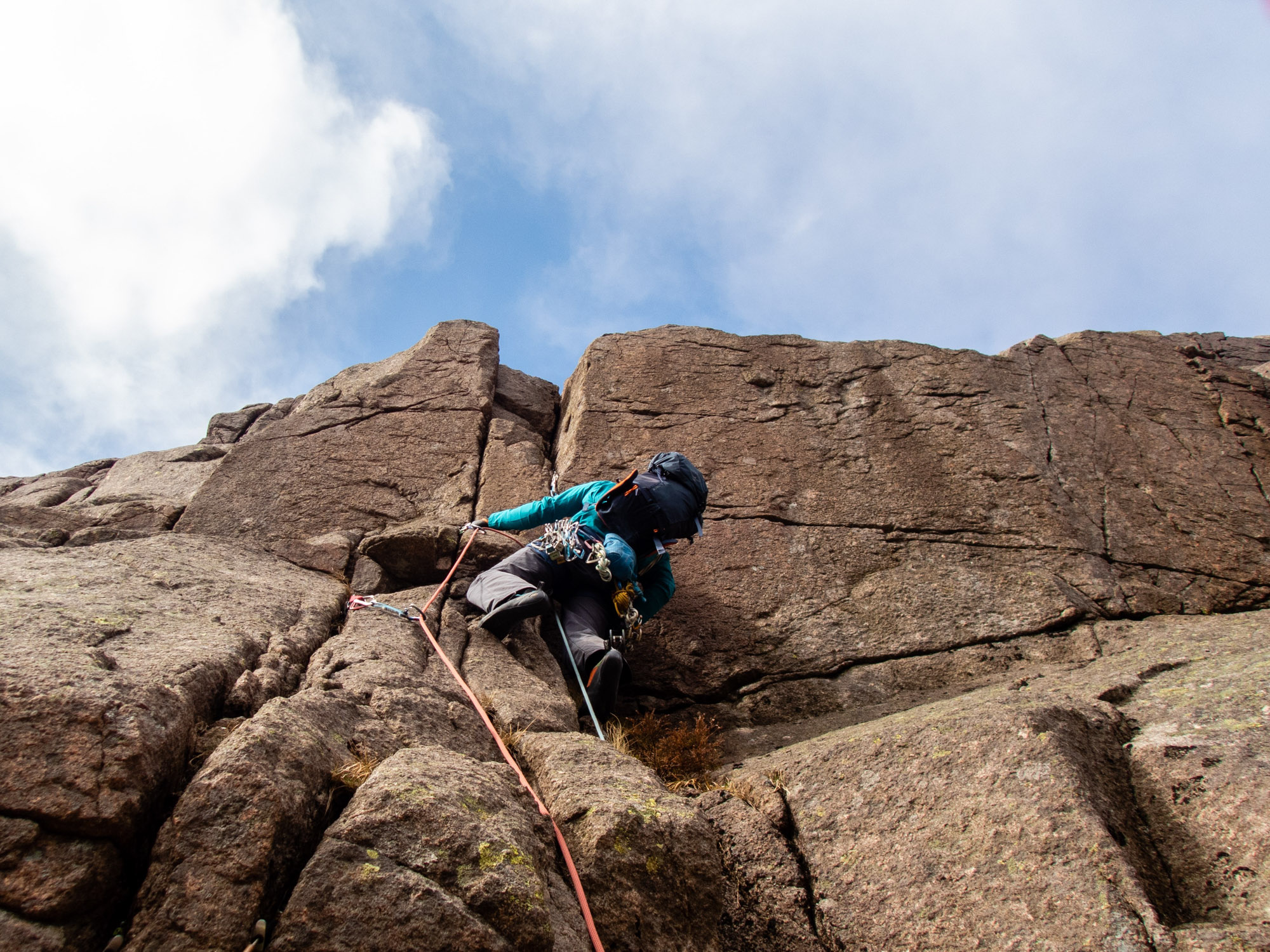 A welcome respite is enjoyed on the ledge above before following a continuous crack through tricky bulges to the belay below a steep wall. Andy cruised up the crux and led through, breaking out left onto the arete in a fantastic position overlooking Mousetrap. 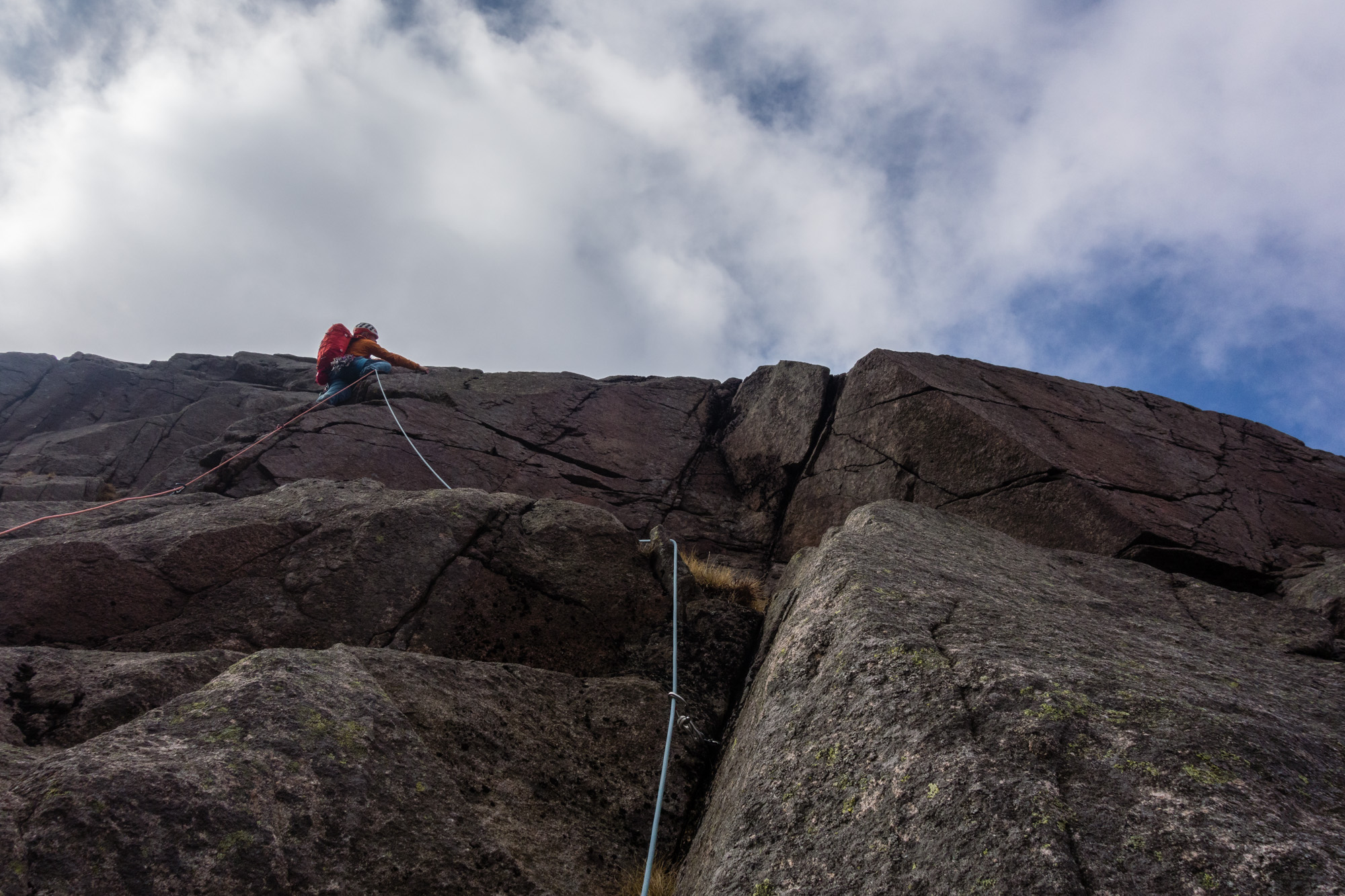 Excellent exposed moves up the arete constitute the main interest on a short pitch 3.

The line on the topo now appeared straighter than the description implied and the terrain ahead looked confusing and difficult. Moving up through the first bulge led to worn patches of granite and signs of passage trending up and right, so I followed these until below a second bulge. Enough small gear lured me on, acutely aware of how tenuous the movement felt on small sloping footholds with little for the hands. At last better holds appeared and a final run-out mantle debouched me on to a superb belay stance below a corner. 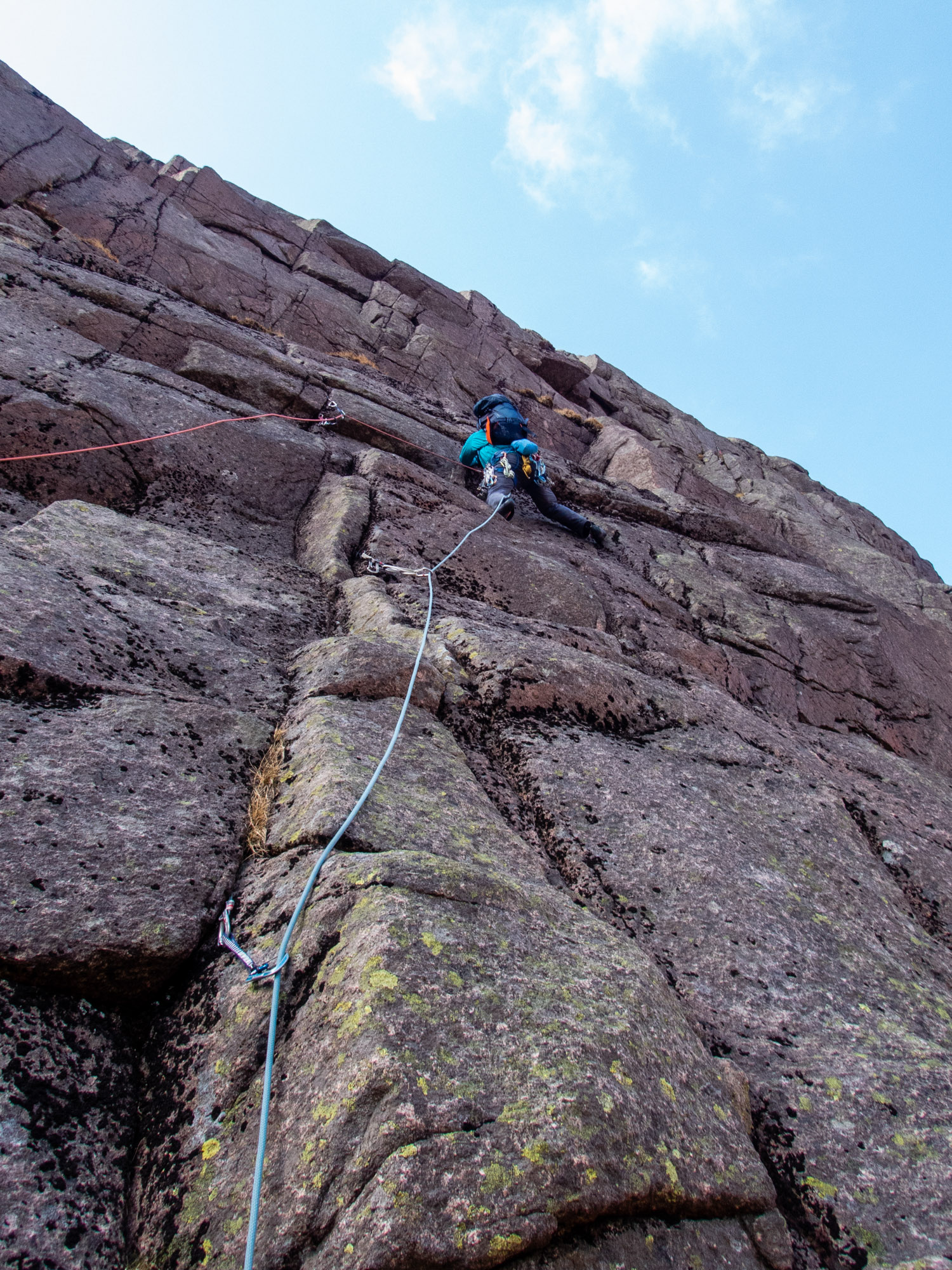 The psychological crux of the whole route for me – committing moves on a rising traverse with just enough gear. Fantastic climbing! Photo credit: Andy Harrison 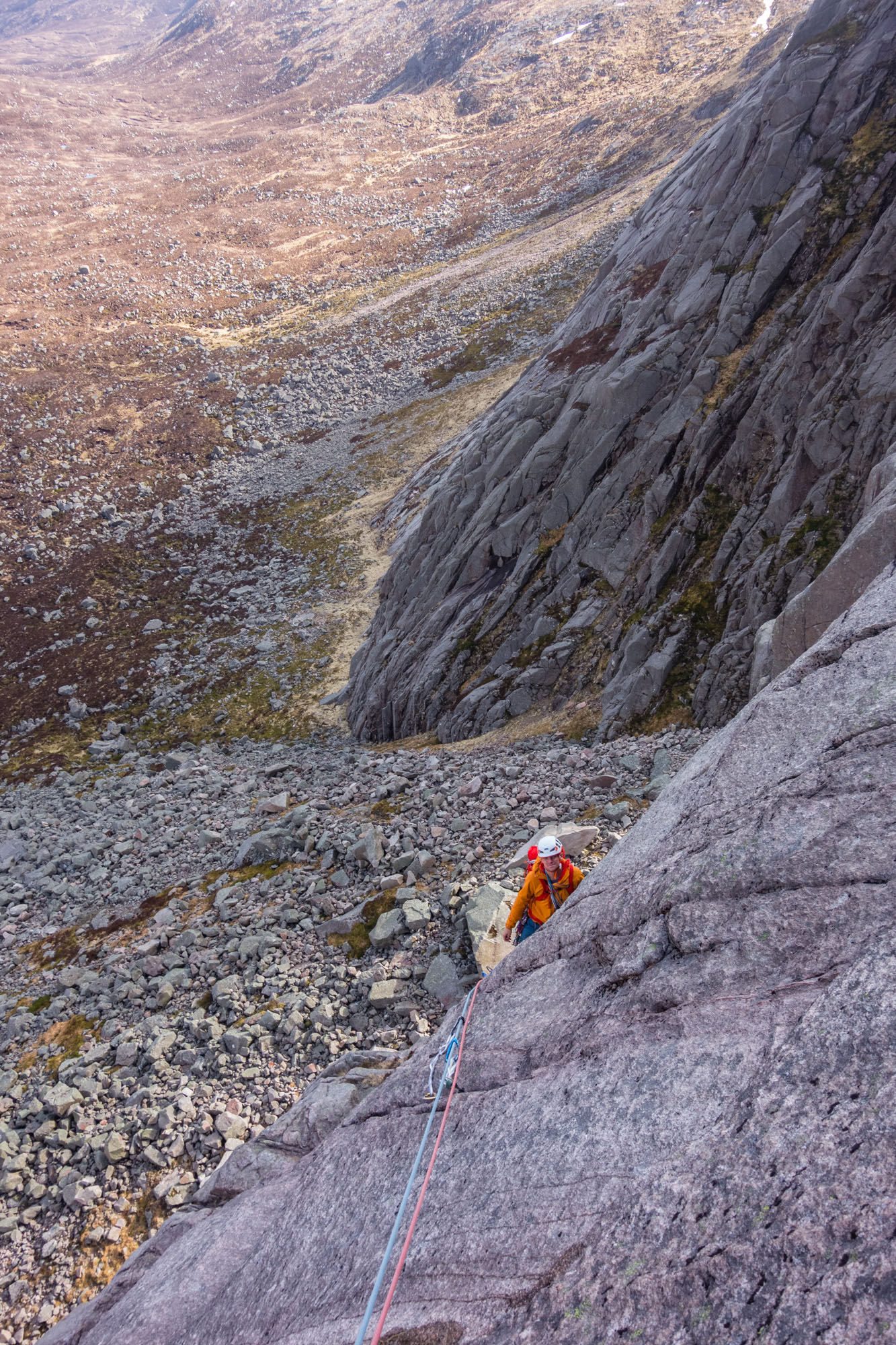 Andy padding his way across the insecure rising traverse on pitch 4. Pulling the bulge felt very committing, although thankfully gear does appear.

By now we both felt we deserved a reprieve from the relentless technical climbing, but pitch 5 had other ideas! Difficult walls trending up and left, a short corner, steep pulls out right on to the rib and finally a very unusual sequence to outflank the bulge on the left, typifying this unique style of Dubh Loch climbing: A very sustained pitch and a fine lead from Andy! 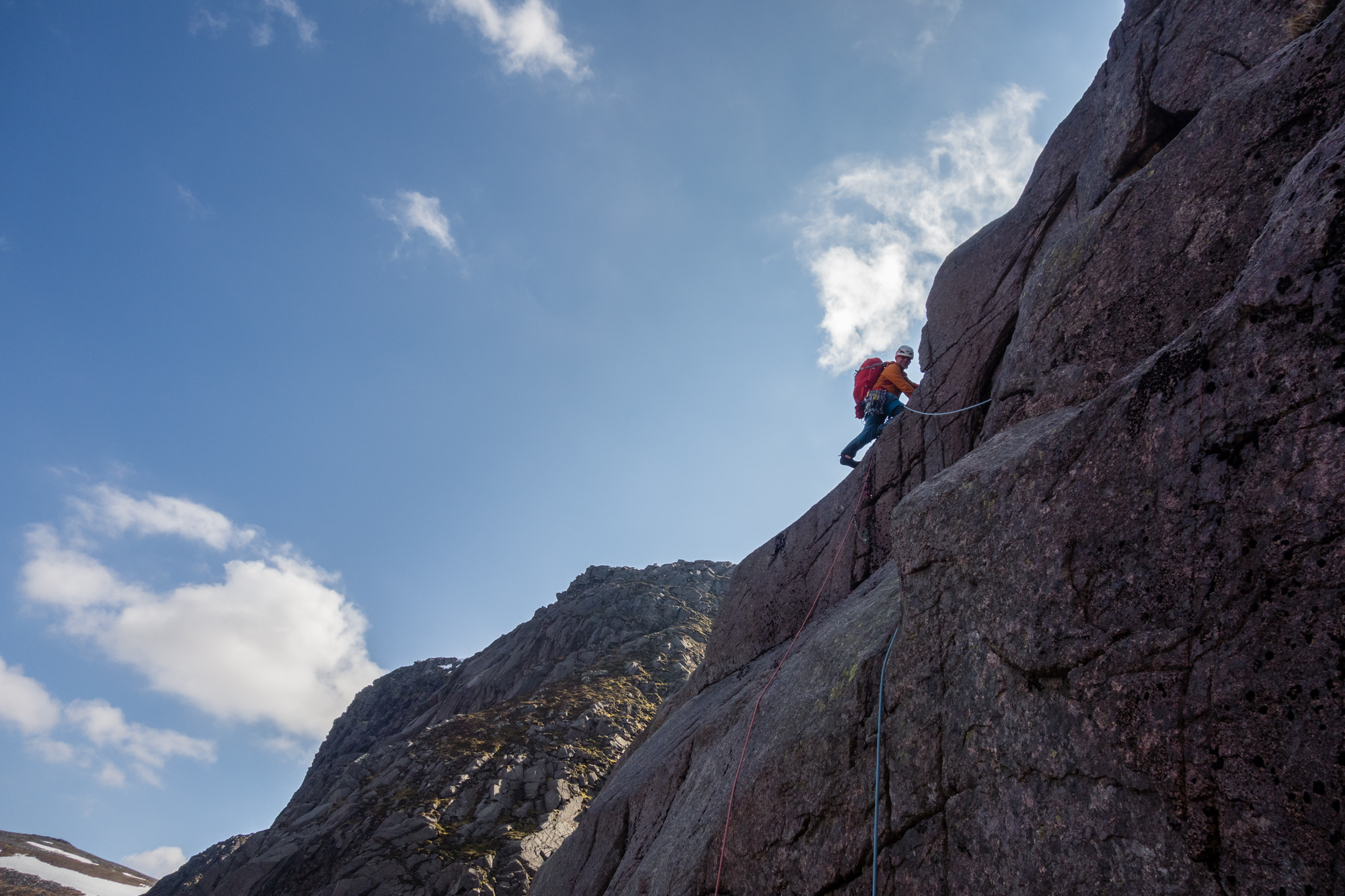 Andy in his element after negotiating the short wall before the corner on pitch 5. This was a tough pitch, sustained, with a crux that felt just as hard as anything below. 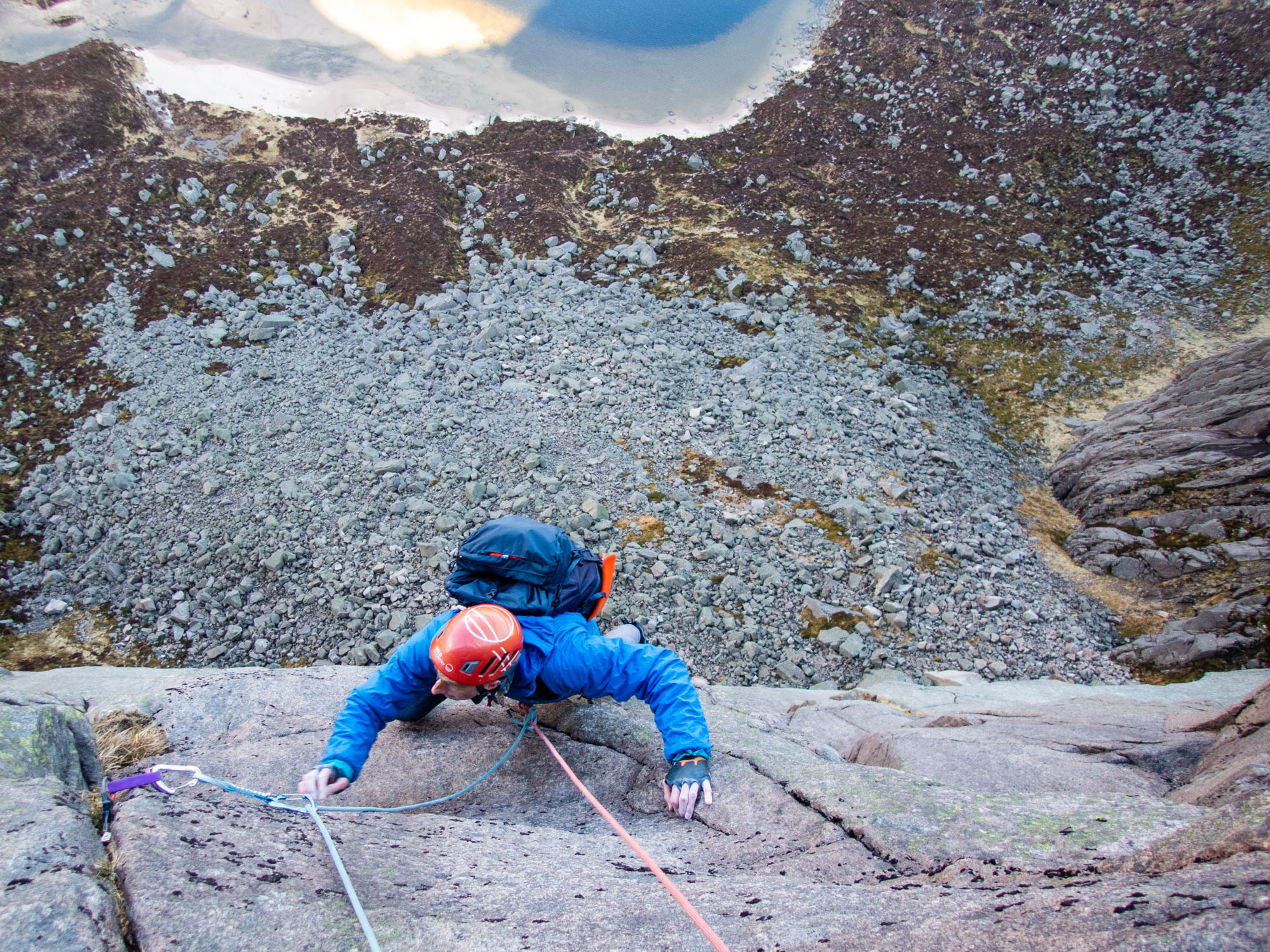 Balancing across the final slab of pitch 5 after an unrelenting 45m – a proper sting in the tail! Photo credit: Andy Harrison

The guidebook would have you believe the final 60m pitch is a direct line up from here, so easy as to not even warrant a tech grade…. But lingering dampness, lichen and blank slabs made that seem unlikely, so I traversed up and right into the obvious crack system and made for the top, falling short of the easy ground by 10m or so. I think this was the same way we finished King Rat, but it made sense on the day! 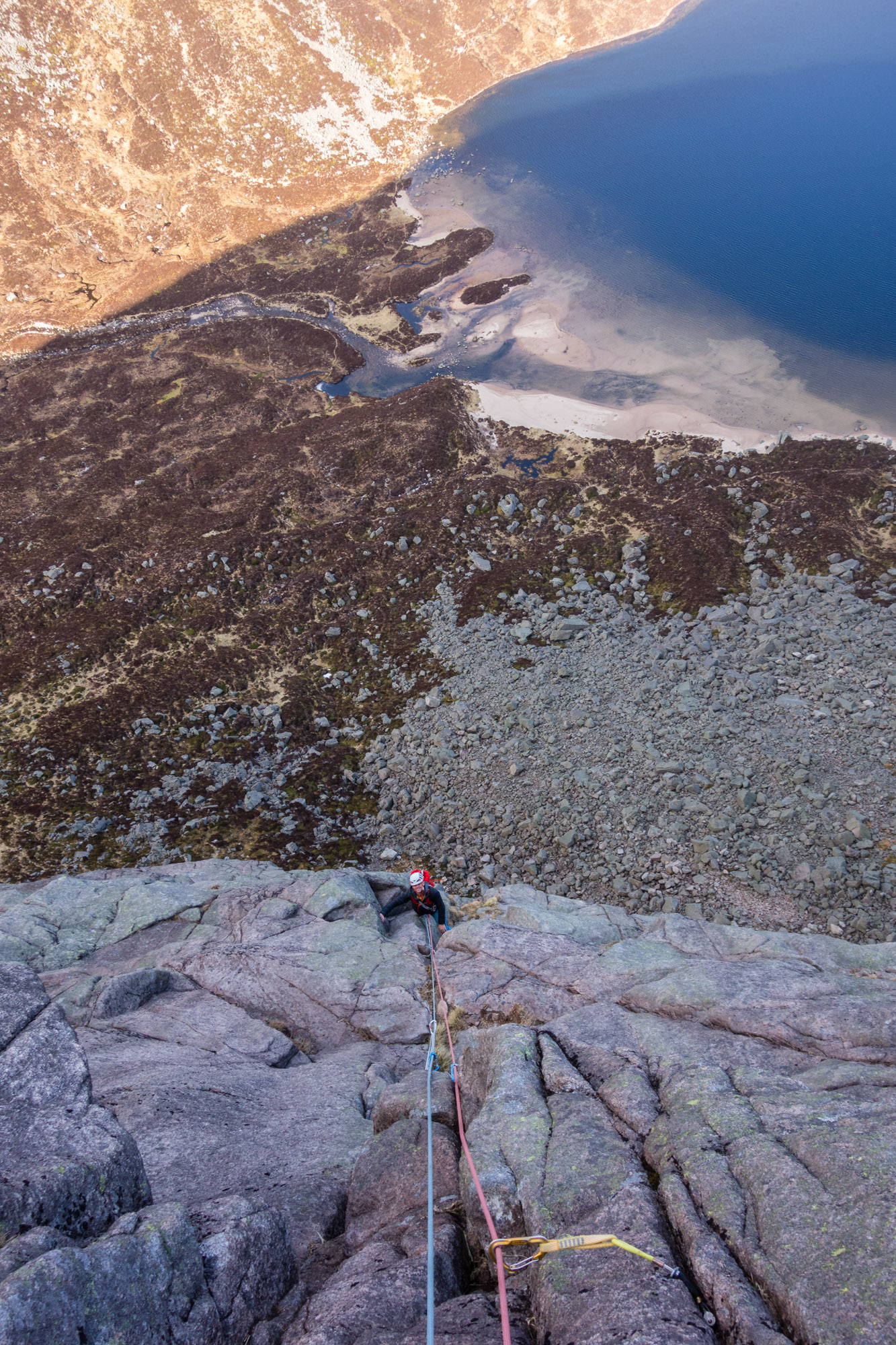 Andy on the easier ground of pitch 6, which felt suspiciously like the final section of King Rat. Can’t complain though!

Andy sped on to the broken ground above the main face where, from prior experience, I knew the easiest way out was to scramble way left and up a short steepening to the plateau. We both agreed this was one of the very best and most challenging routes we had climbed in Scotland; a route worthy of more than it’s 2* status, full to the brim of brilliant Dubh Loch granite weirdness! 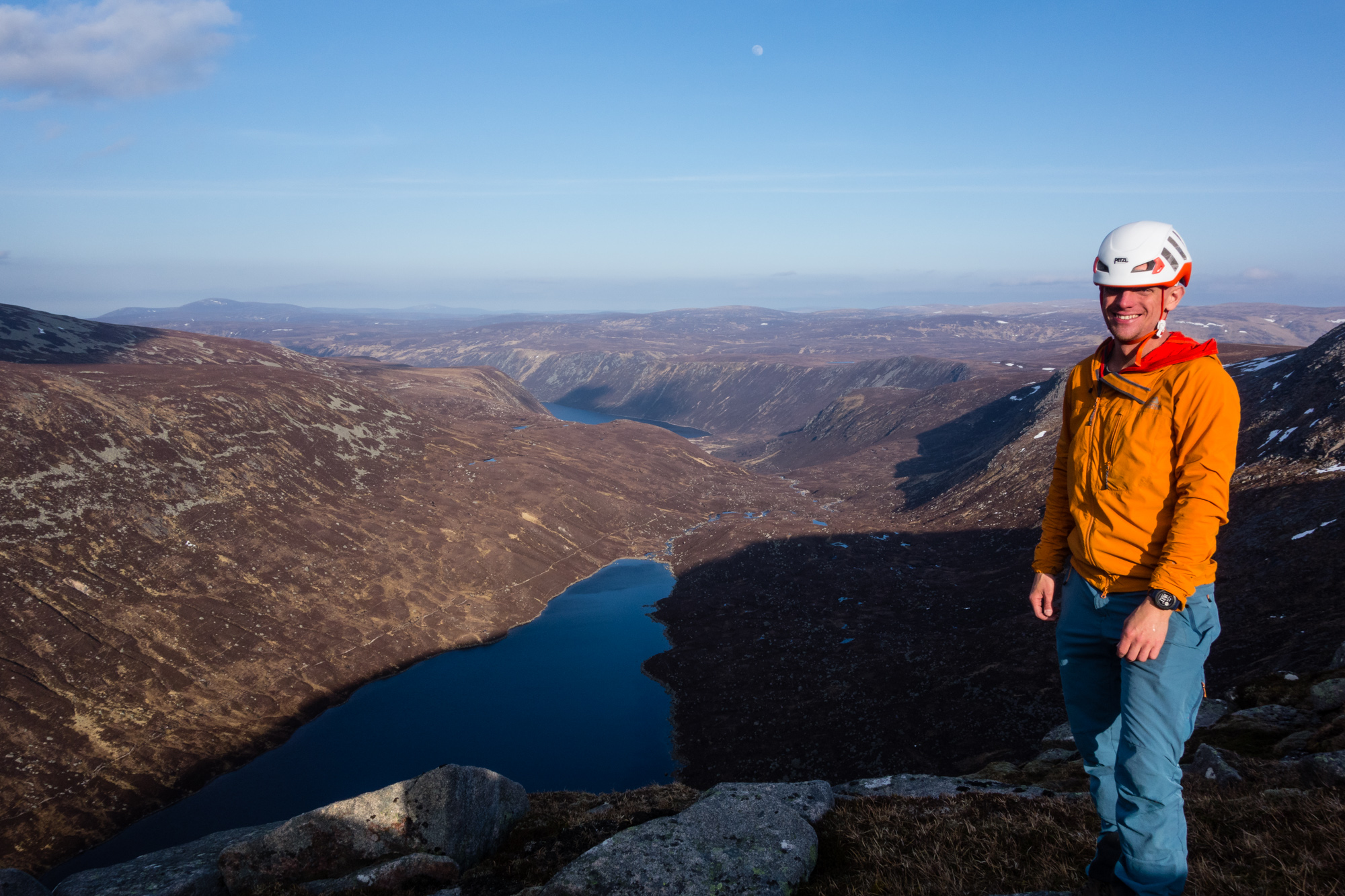 Andy basks in the sun after emerging from the shadow of the Dubh Loch Monster. I’ll never tire of these views!

One thought on “Maximum Granite Weirdness on the Dubh Loch Monster”