Following some great routes but mixed weather in the Grimsel Pass, the perfect window presented itself for a much bigger mountain objective. The famous Sudgrat of the Salbitschijen was the ideal target, with its 16 pitches offering 600m of golden granite perfection. 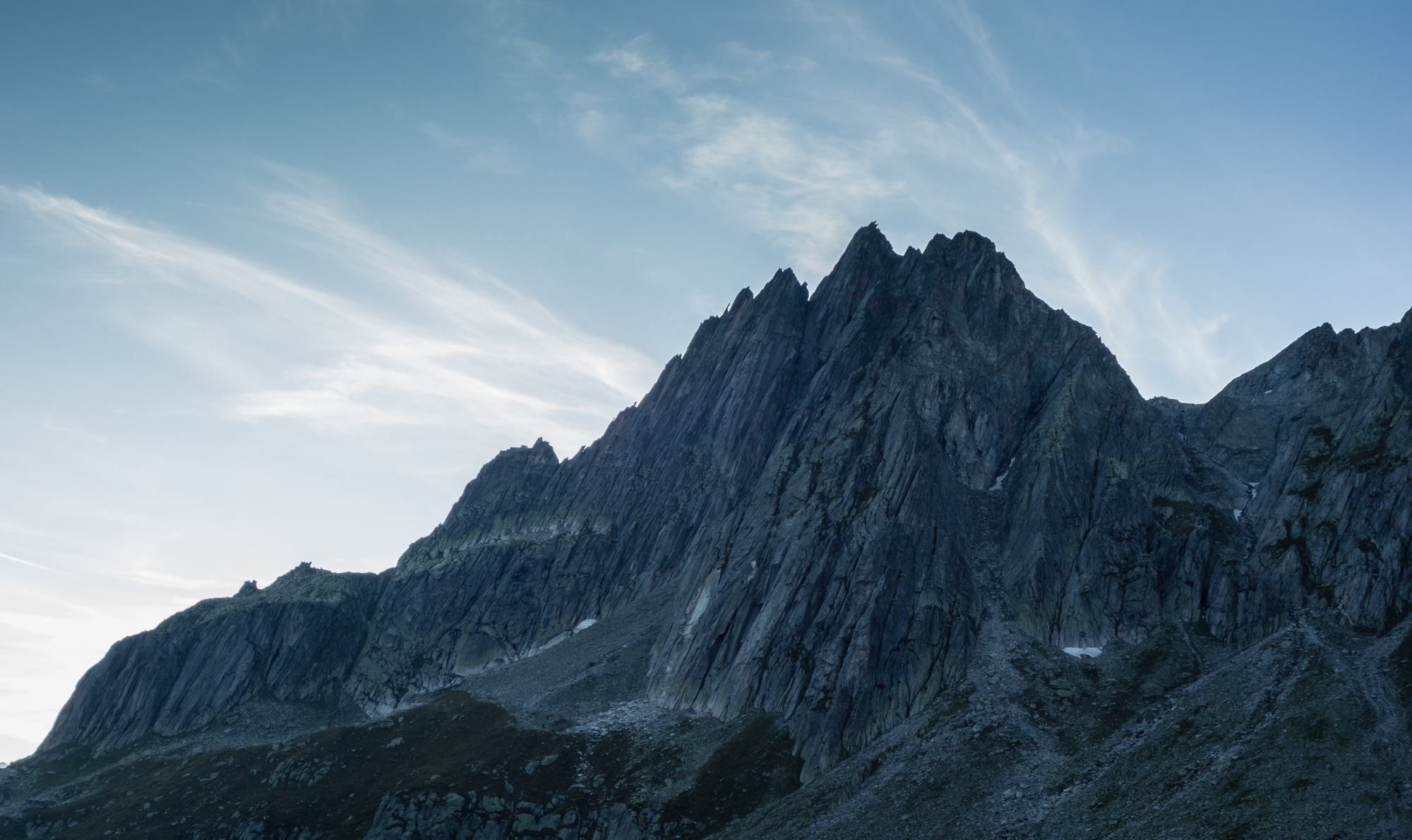 We sweated up to the Salbithutte in blazing sunshine, dodging giant ticks and dehydration to arrive on the hut terrace, surrounded by alpine perfection. The dinner and banter with other guests was excellent but the views as the sun set were hard to beat! 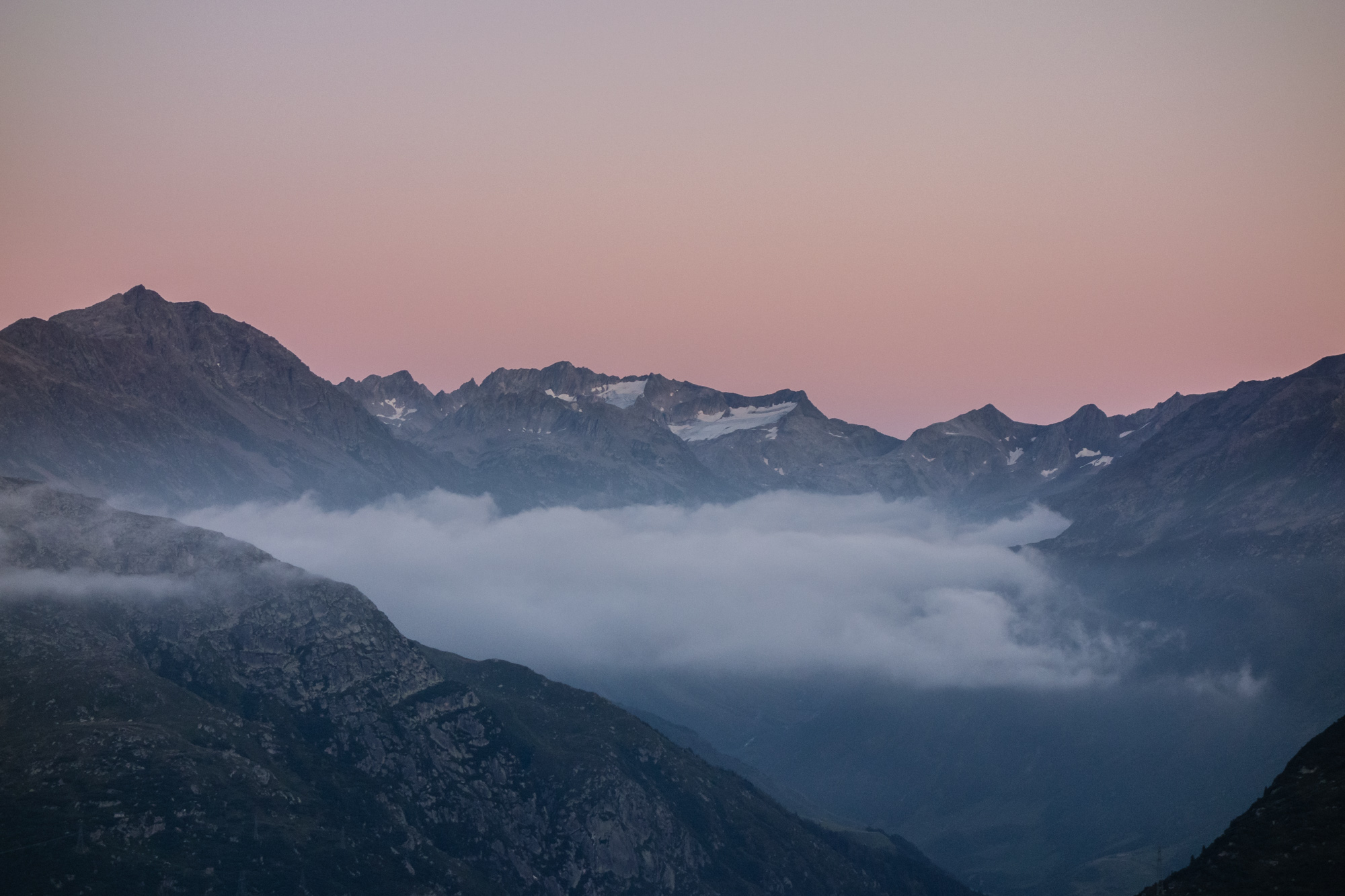 Alpenglow on the Gemsstock, looking south east towards Andermat from the terrace of the Salbithutte

We set off at a reasonable time the next morning, not needing head torches for the walk to the base of the approach gully. Chains provided easy passage past a chockstone before some disconcertingly steep gravel deposited us at the base of the ridge proper. We sped up the first four pitches, with only the second pitch putting up a fight, to arrive at the first abseil and a view of the monolithic task ahead. 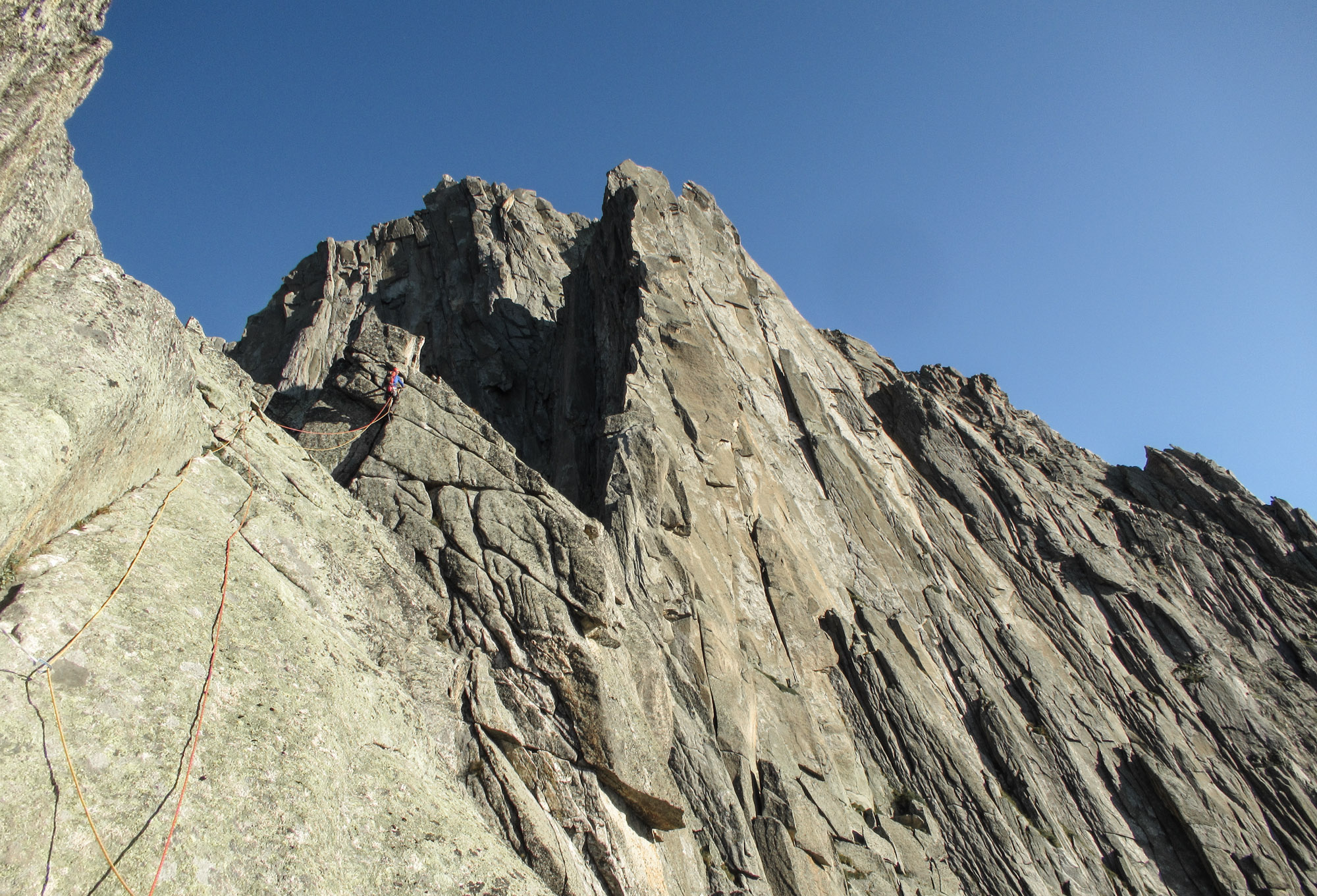 Nearing the first abseil at the end of the fourth pitch with plenty of impeccable granite to go! Photo credit: Ric Hines 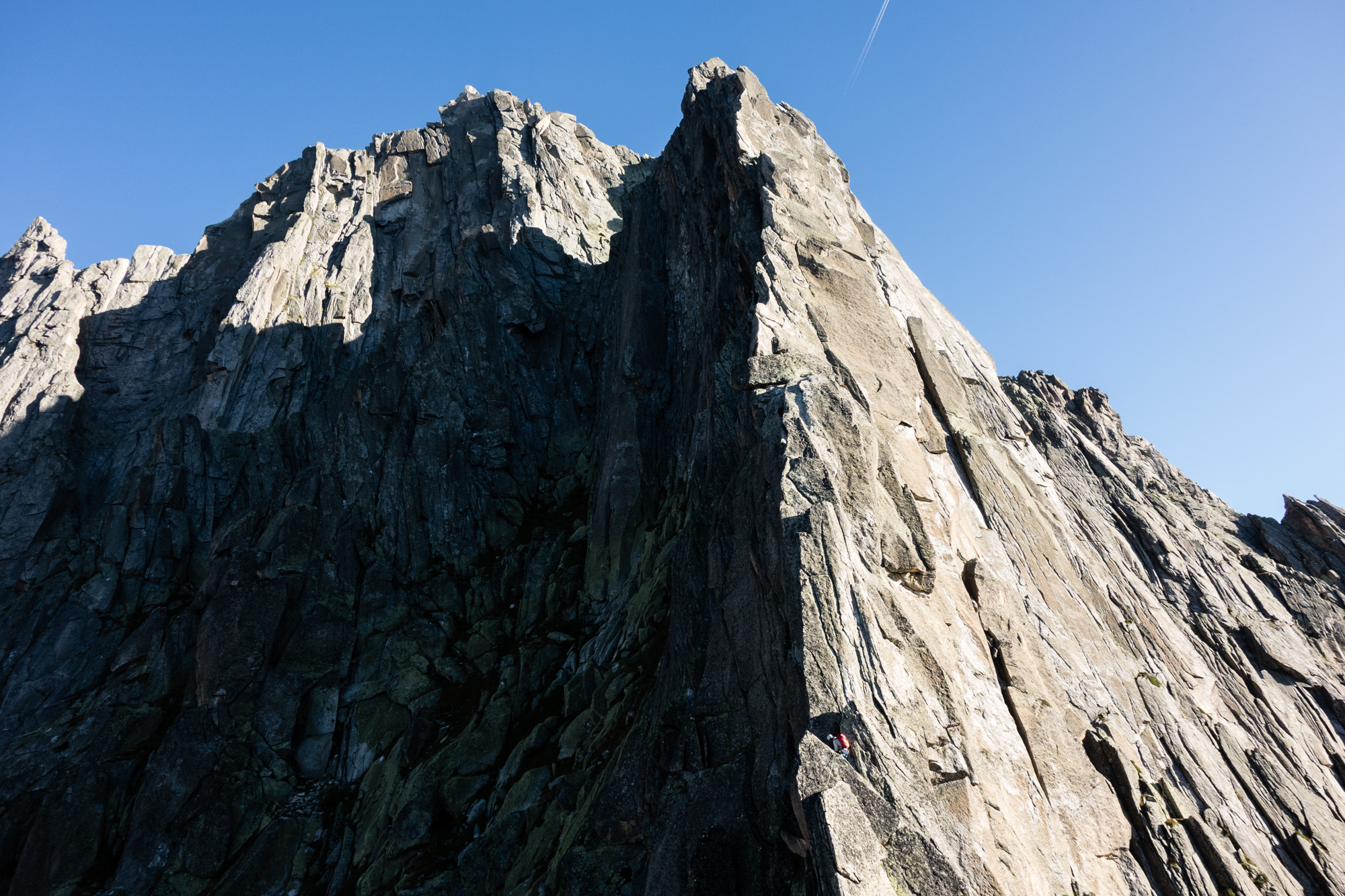 Miles of laybacking in the sky – the meat of the Sudgrat from the top of the fourth pitch. 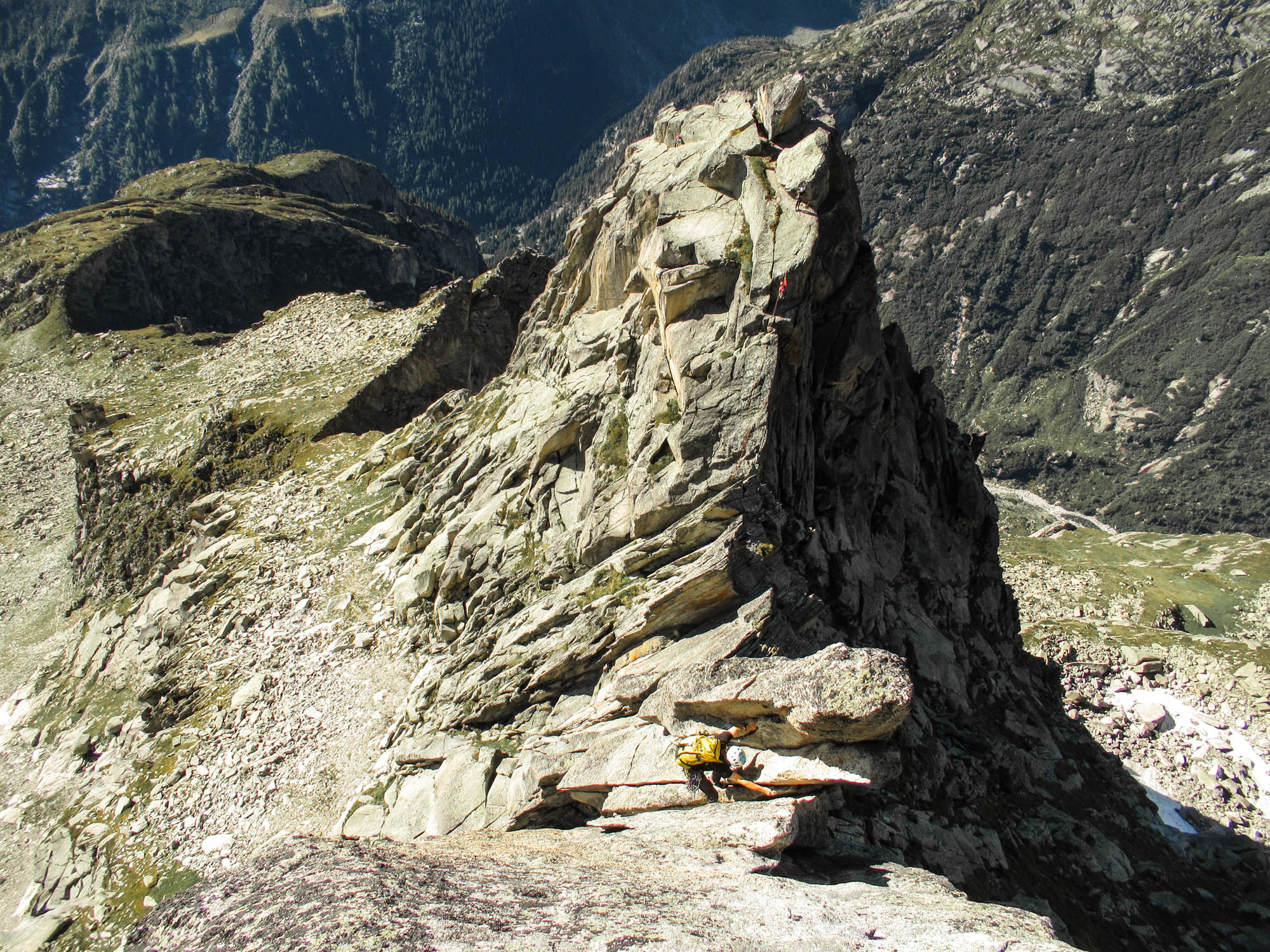 It quickly became apparent that lay-backing was to be the order of the day and once we committed the pitches began to fly by, each one seemingly better than the last! The white and gold granite shone against the brilliant azure sky as we moved up the arete on the sun-shadow line. If the climbing on the Sudgrat was superlative, then the views across to the Westgrat were indescribable! 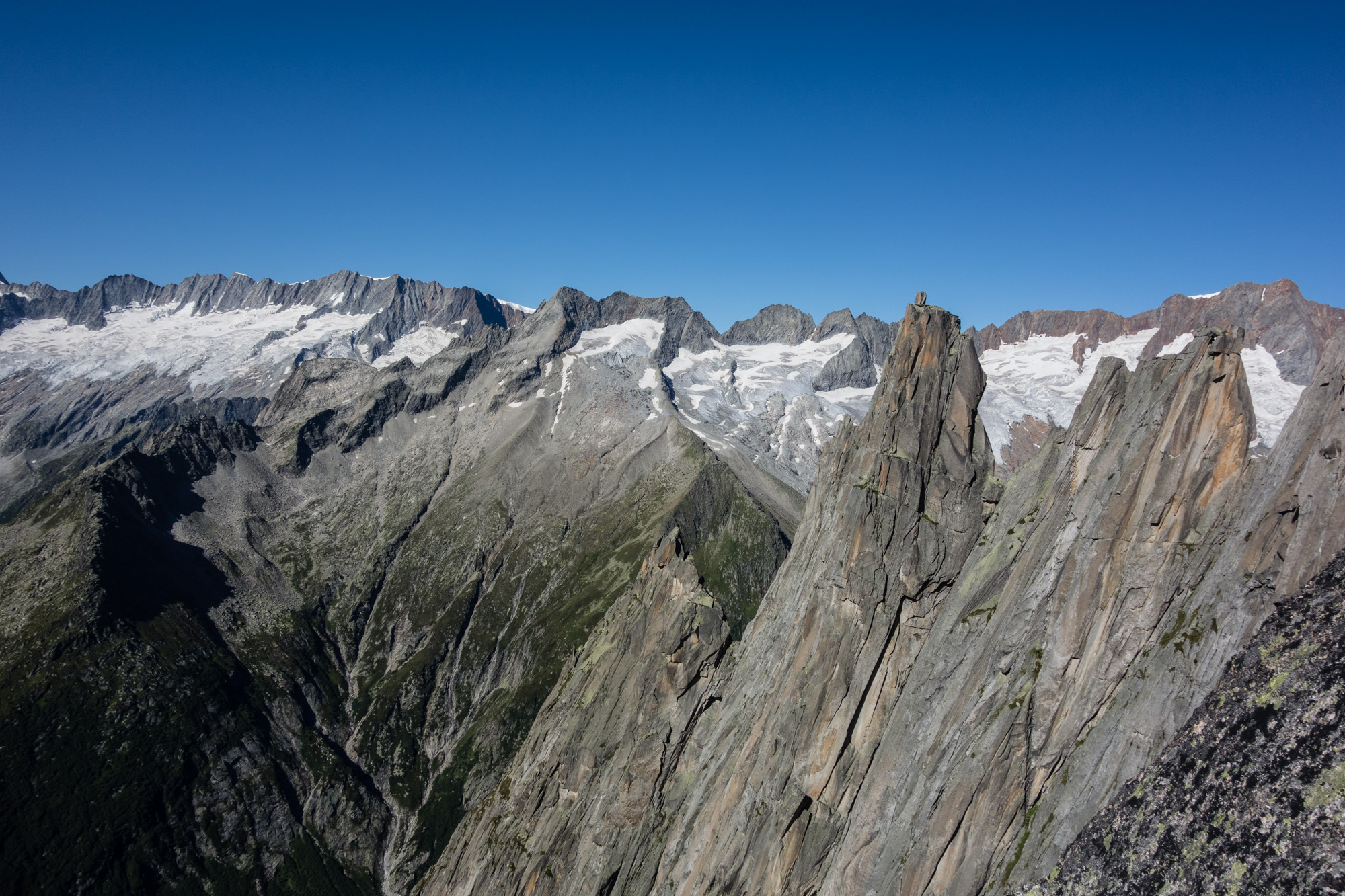 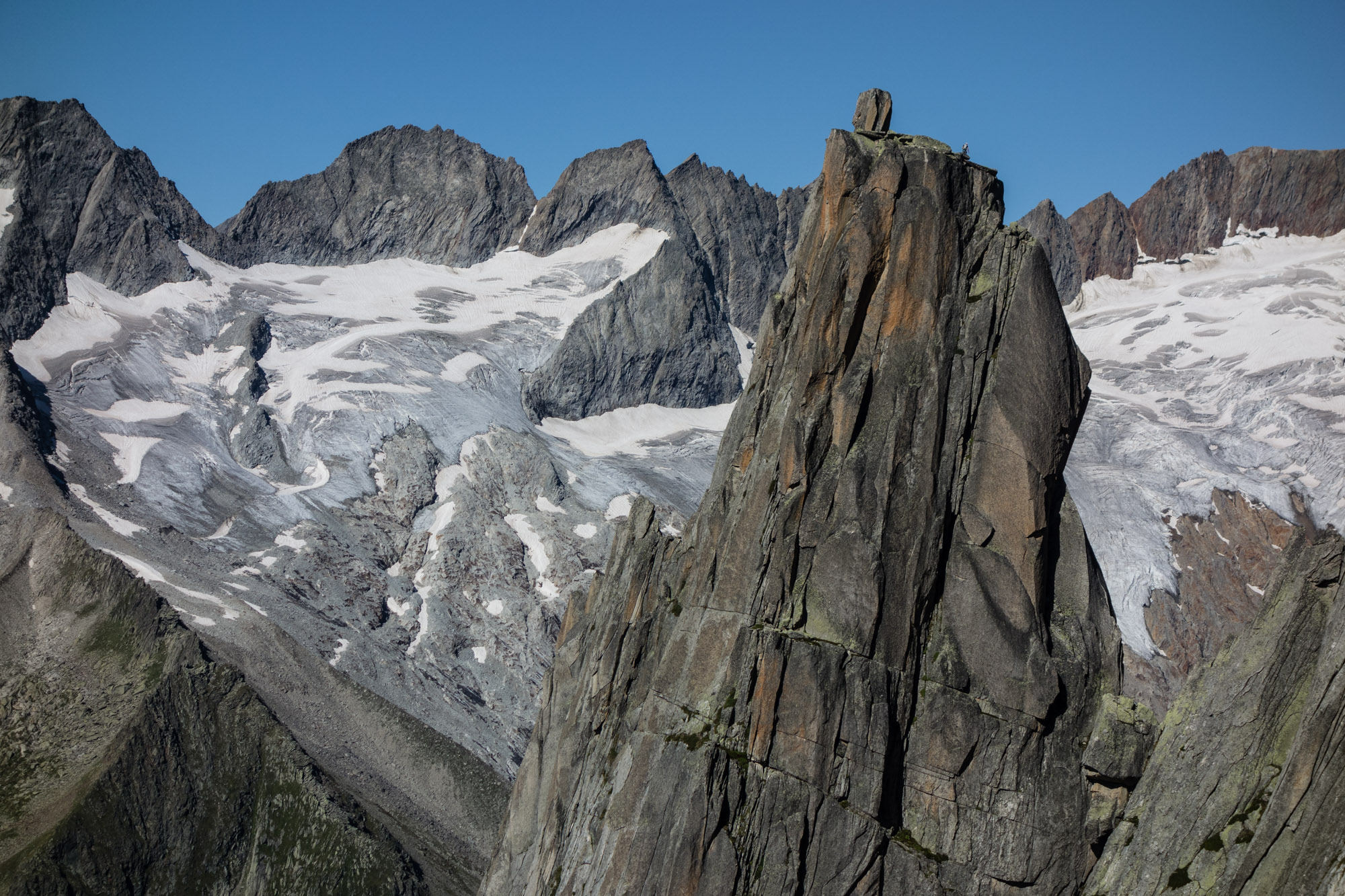 Colourful Austrian climber on pitch 7. Oh look, another section of lay-backing above him!

It’s rare for an alpine route to have such continuously high quality climbing for pitch after pitch, but just when we though it couldn’t get any better, we hit the money pitch. The crux entails a brilliant sequence up a white shield of granite, before a short, thin, corner provides a moment of desperation and leads to the sanctuary of jugs on the arete above. Having negotiated the thin technical corner, Ric motors on up the arete in a spectacular position! 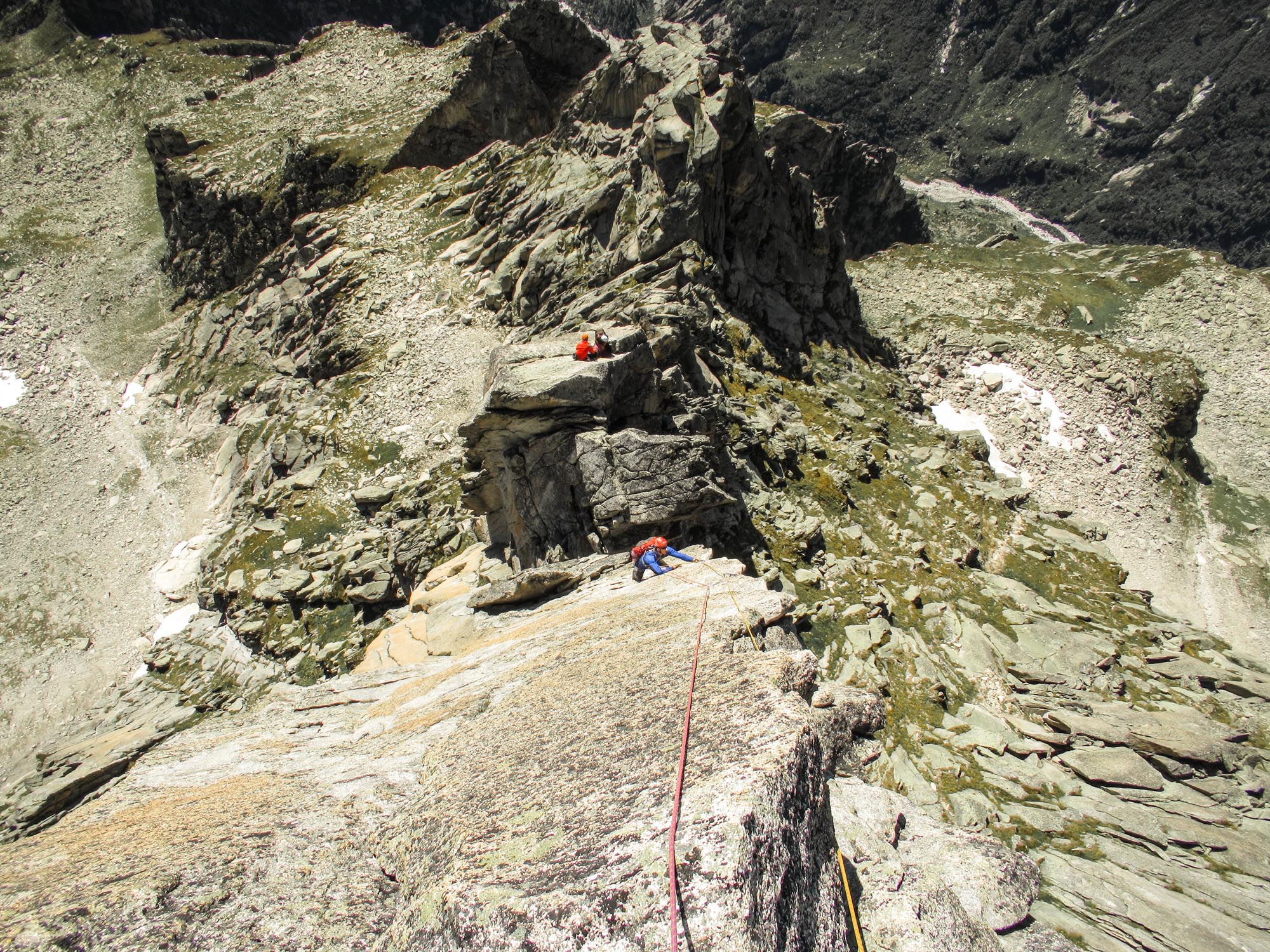 Approaching the belay at the end of the crux pitch – time to pause for a moment and appreciate the surroundings. Photo credit: Ric Hines

The next few rope lengths went by in a blur, the flow only broken by the occasional abseil off another tottering gendarme. Looking over at the ant-like figures scuttling up the Westgrat, we could only imagine what it would feel like to stack another 16 pitches on top of this route.

Ric moves smoothly up endless exfoliating flakes, while the summit never seems to get any closer in the pristine air. The never-ending towers and gendarmes of the Westgrat in all their glory – what a route! 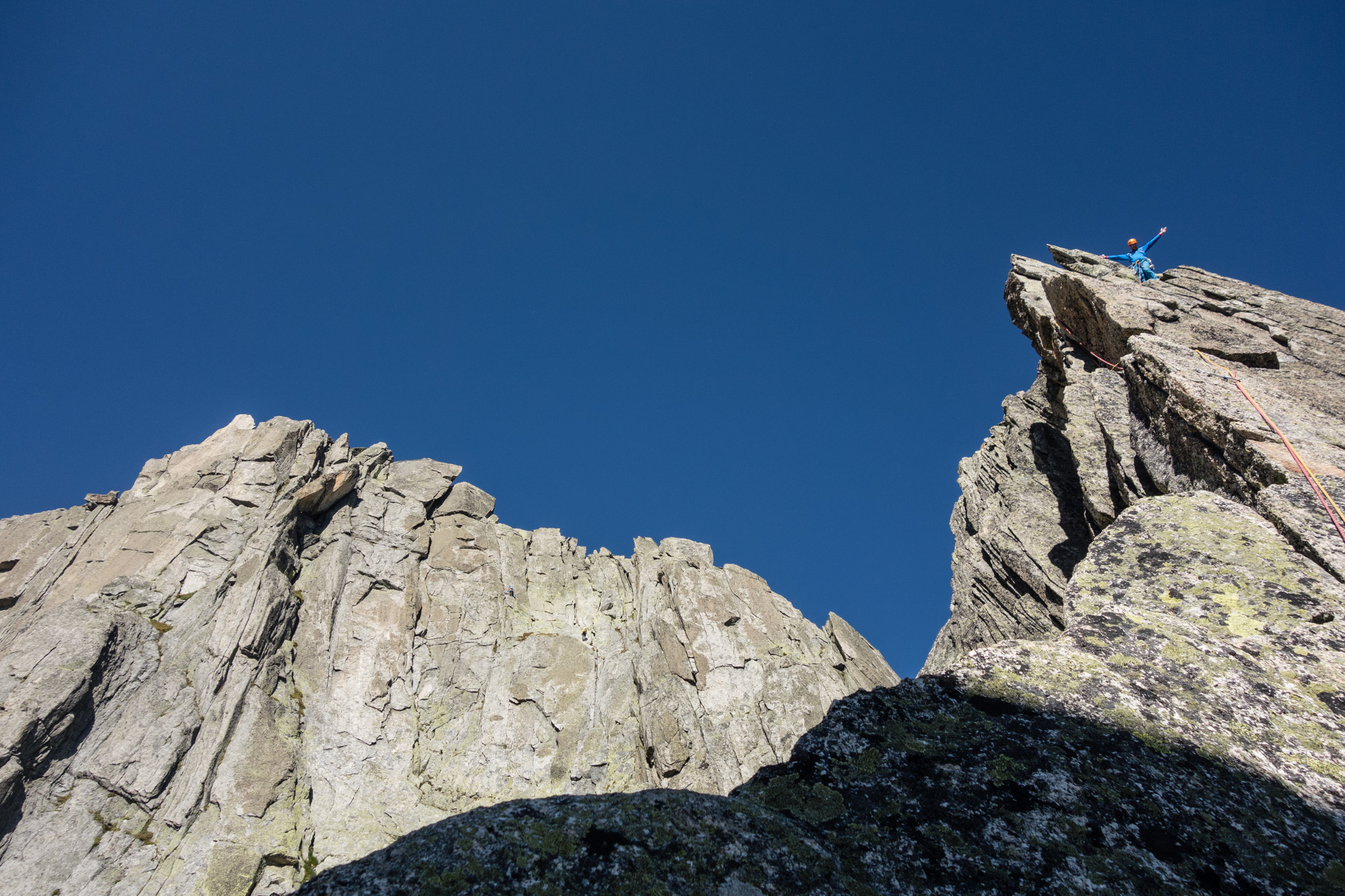 Nearly there! An abseil and a short scramble from here takes you to the headwall, where the Austrians can just be seen on the final pitch.

The insidious creep of dehydration and fatigue couldn’t bring the psyche levels down and Ric put in a stellar effort to take us up the final headwall and onto the summit ridge. After much fist-bumping we dumped bags and scrambled up to the top to be met with an unusual sight – a queue of teams standing in line for the summit needle! 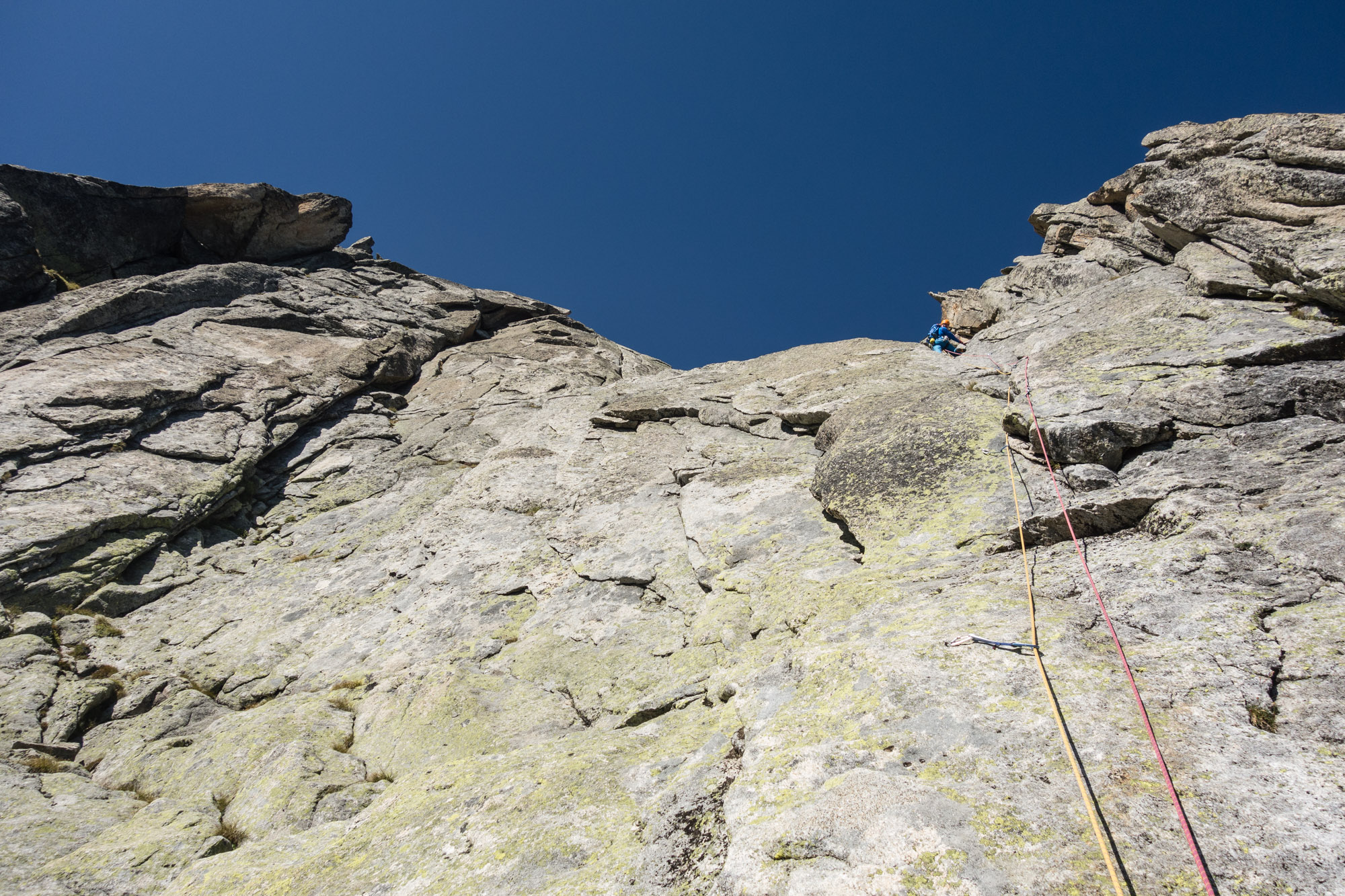 The second of the three headwall pitches – similar in difficulty but different in style to the ridge below. Happy climber on the Salbit summit needle. We chose dinner at the hut over queuing for the last 10m, so technically we need to go back to finish it… 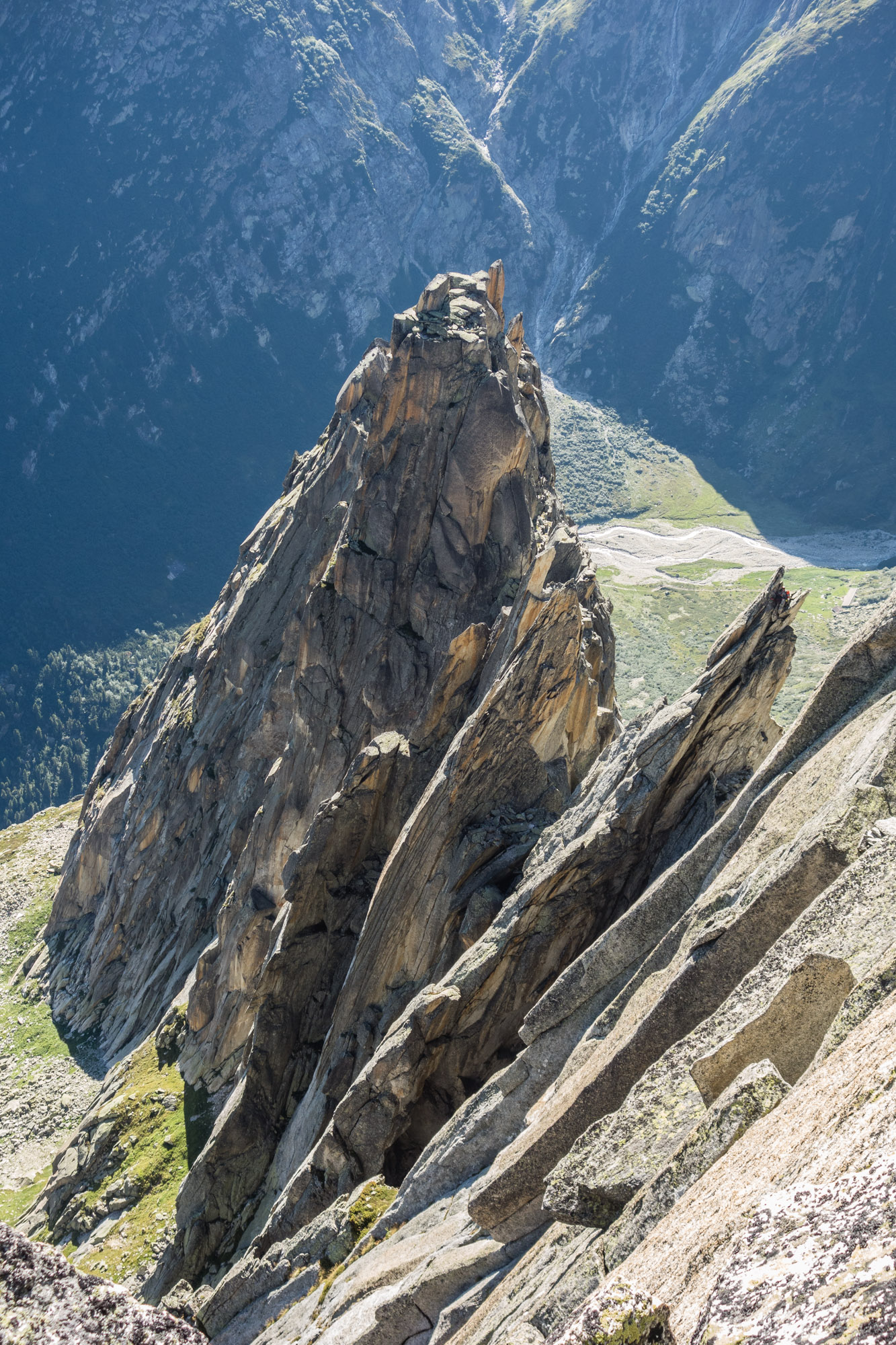 Looking down the Westgrat from the base of the summit needle. A climber can just been seen between the horns of the rightmost tower.

Not wanting to finish the day by queuing, we moved together down the loose northern flank of the mountain until we hit the scree slopes above the descent gully. Scampering down this we arrived at the hut exactly on time for dinner, cocktails and medals.

We were delighted with the route, but having seen the Westgrat up close we knew this wouldn’t be the end of our affair with the Salbit – we’ll be back!