After a fickle start to the 2018/19 Scottish winter season, Andy and I wanted to guarantee some time on ice and where better than the ever-reliable Rjukan! We had both been there a few times before but given the simple logistics, wealth of quality ice lines and a promising forecast, it was an easy choice. I was very keen to climb the classic Sabotorfossen (WI5) and Andy needed little persuasion, so we headed straight into the Upper Gorge on the first day. 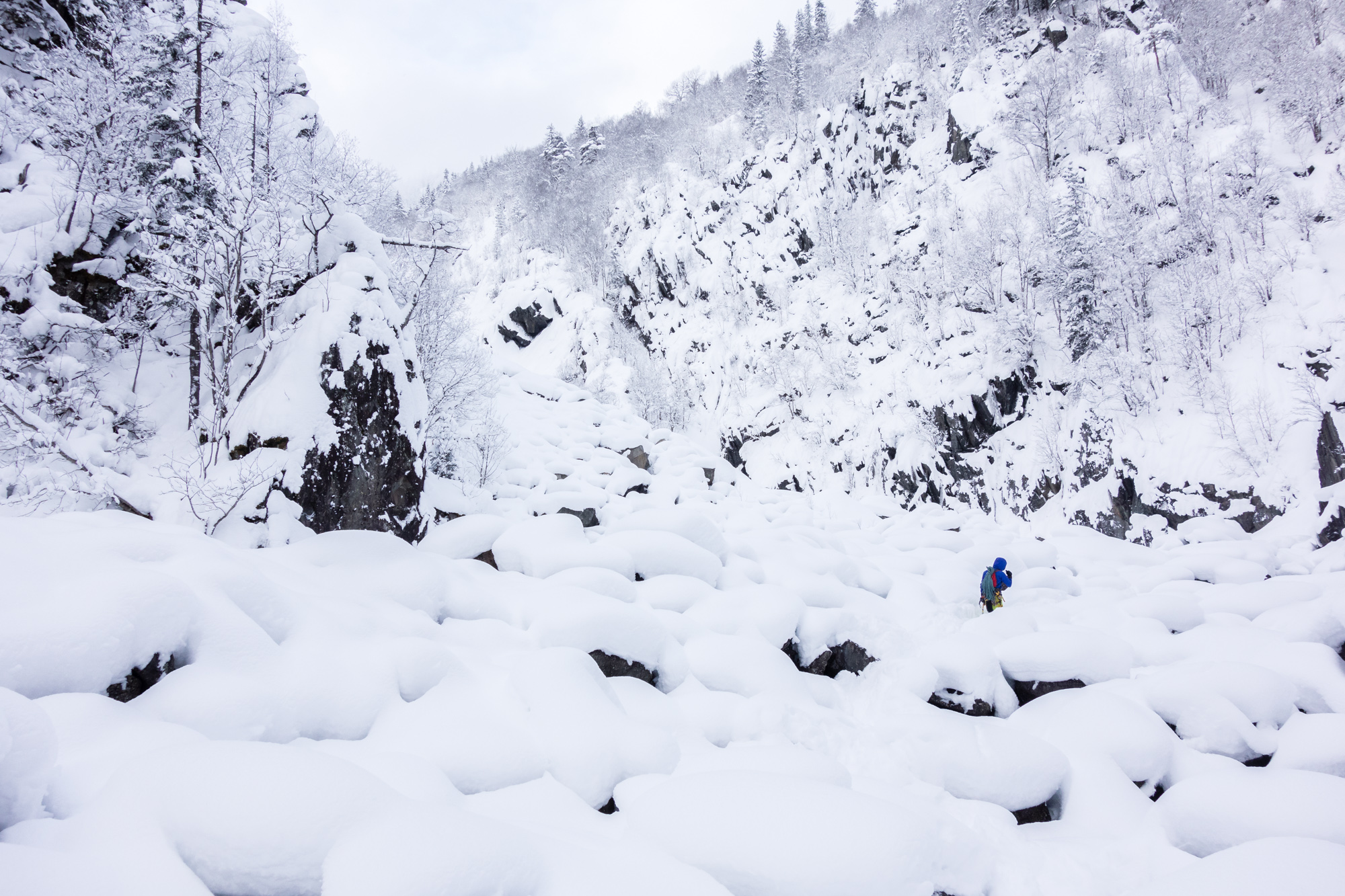 Andy making his way through a sea of pillows on the way to Sabotorfossen. It would have been annoying if it wasn’t so picturesque! A team entering the chimney section in the middle of the route. The crux pitch can be seen looming above. 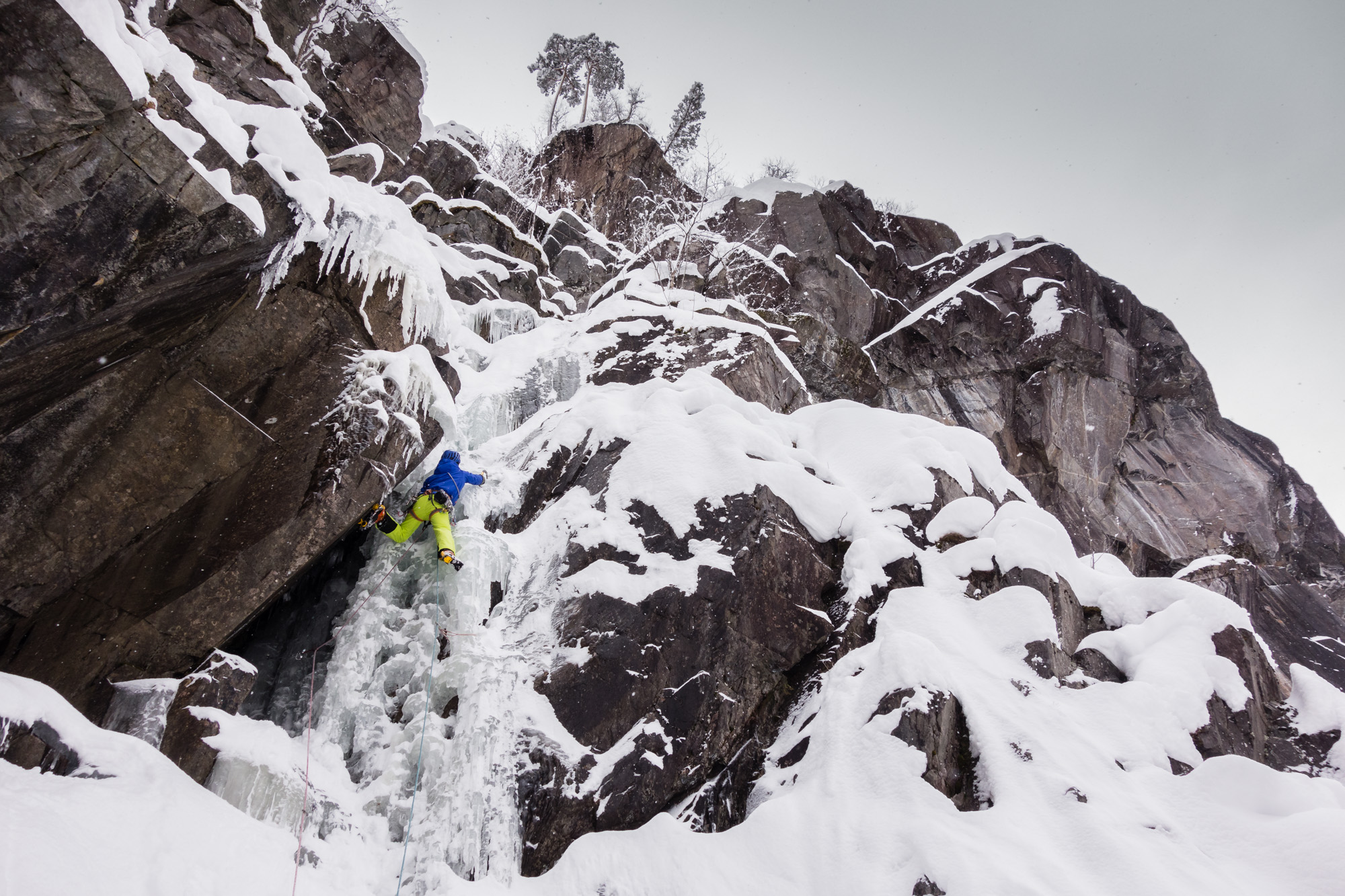 Andy climbs featured ice at the start of the second pitch. From here the route disappears around the corner into a series of steep chimney slots.

The route was pure quality, but unfortunately I didn’t have the stamina to lead the final pitch without resting. Still, this was preferable to risking a fall on the first day! Not wanting to waste any time and with the route in superb condition, we got an early start next day to be first on the incredible Juvsoyla (WI6). Superbly situated at the head of the gorge and visible from the road, the line is second only to Lipton for quality and fame. The easy angled but very brittle approach pitch on Juvsoyla. We were lucky this year in that the pitch was fat enough to take screws and it provided a good warm up. Photo credit: Andy Inglis 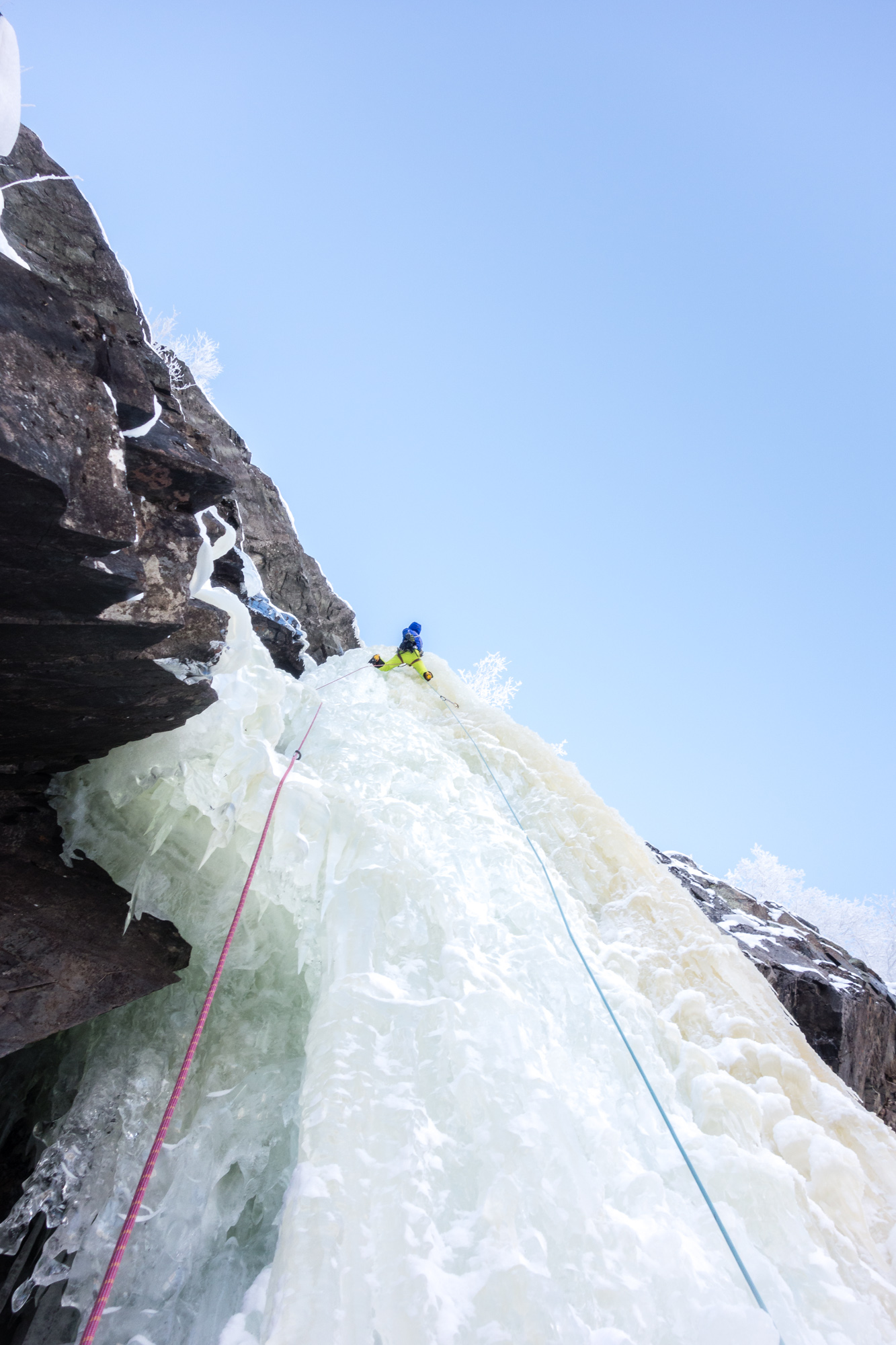 Andy shaking out on the sustained final pitch of Juvsoyla – a spectacular finale to a great route! The view from the top – Andy’s perspective of me milking the final rest for all it was worth! Photo credit: Andy Inglis 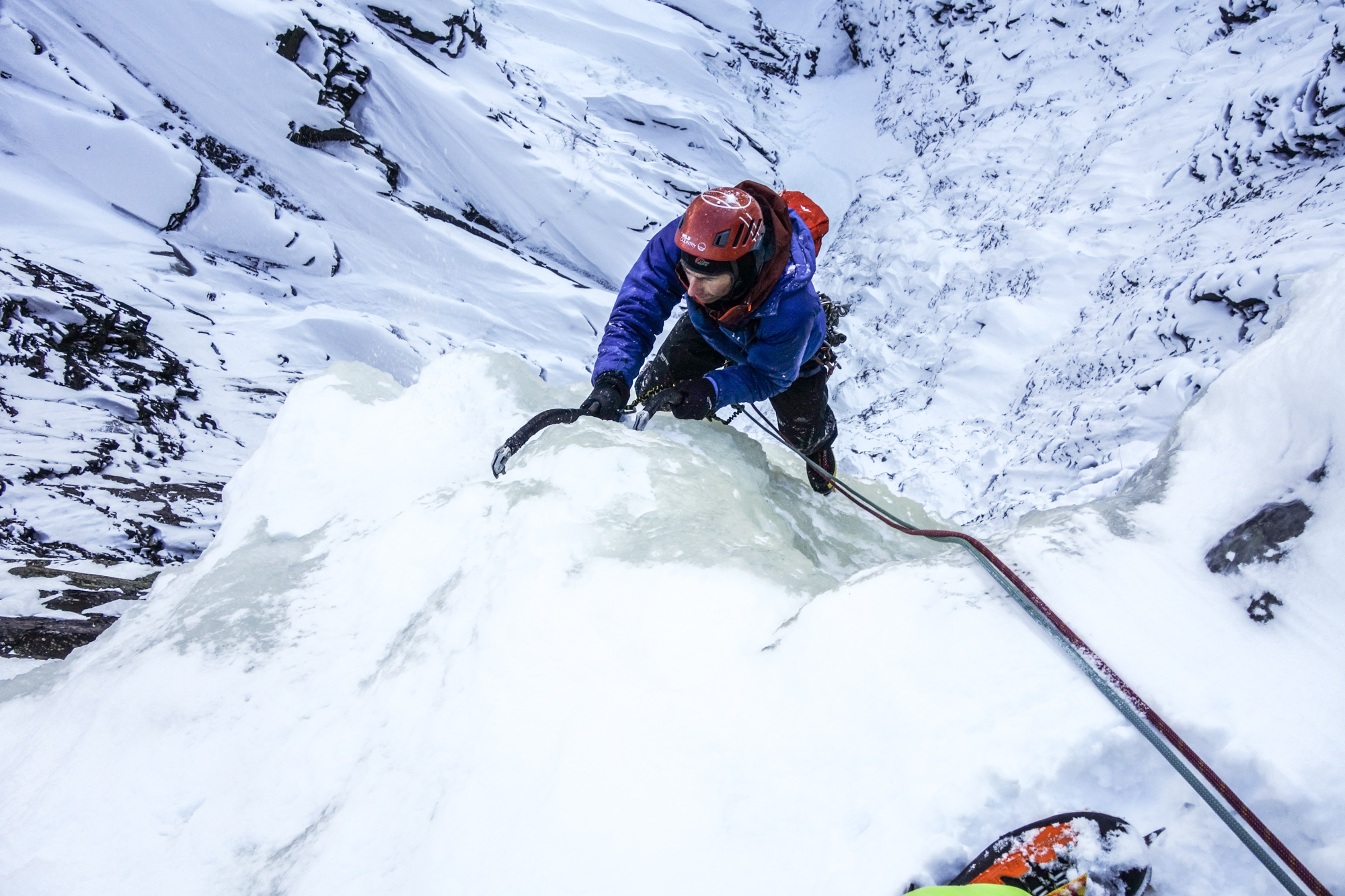 Topping out the steepest and most sustained ice I’ve ever climbed. My forearms had gone beyond pumped by this point and were cramping painfully, totally worth it though! Photo credit: Andy Inglis 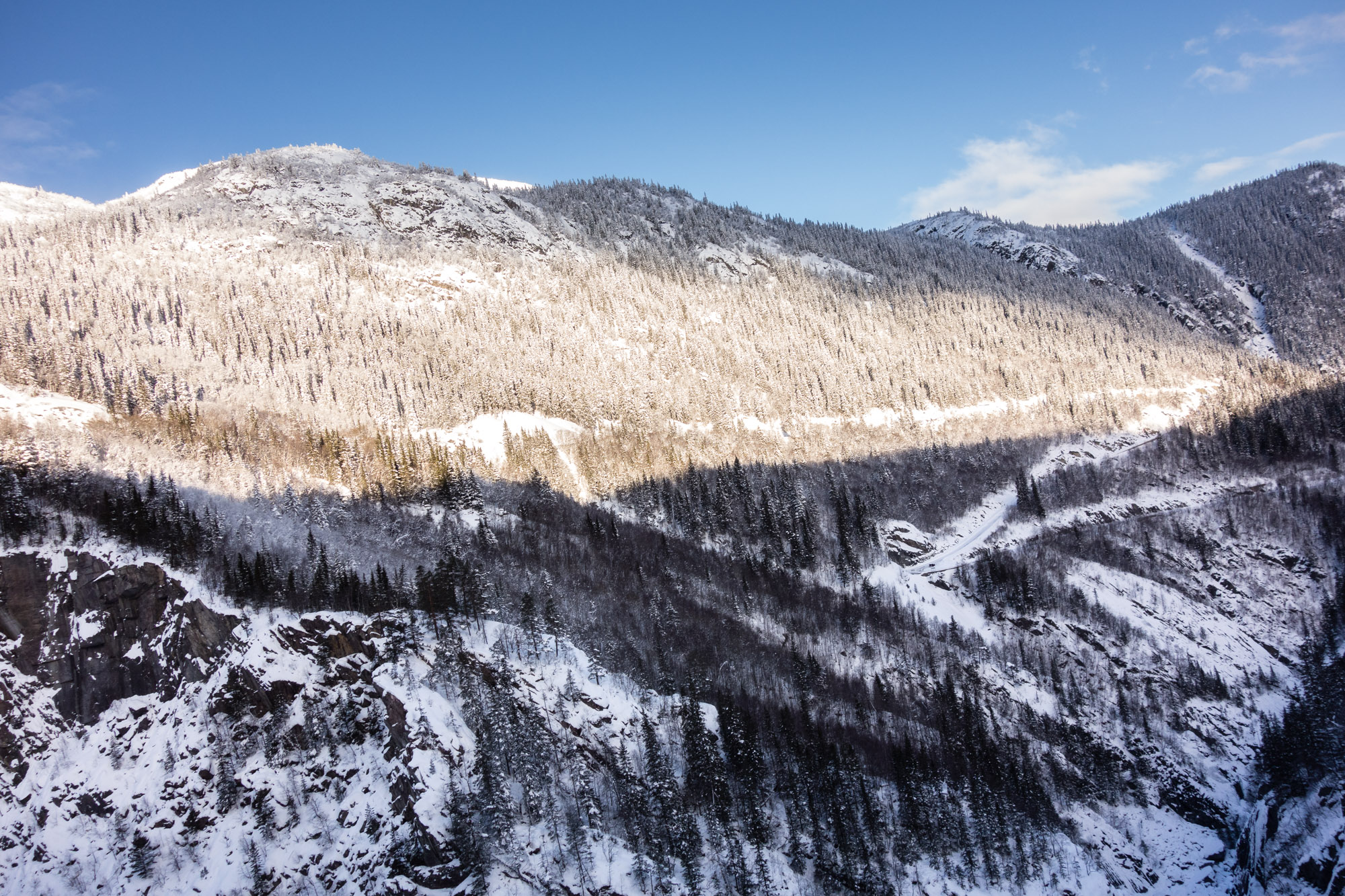 The view across the gorge from the top of Juvsoyla – a proper Scandinavian winter wonderland! The Queen of the Upper Gorge – Juvsoyla in all her glory!

A slightly more relaxed day was called for, so next up was the mellow Rjukanfossen (WI4). Tucked away in the final amphitheatre of the Upper Gorge, the icefall begins as a broad, reasonably-angled cascade before narrowing into a gully containing some short pillars and a mixed finish over a chock-stone. 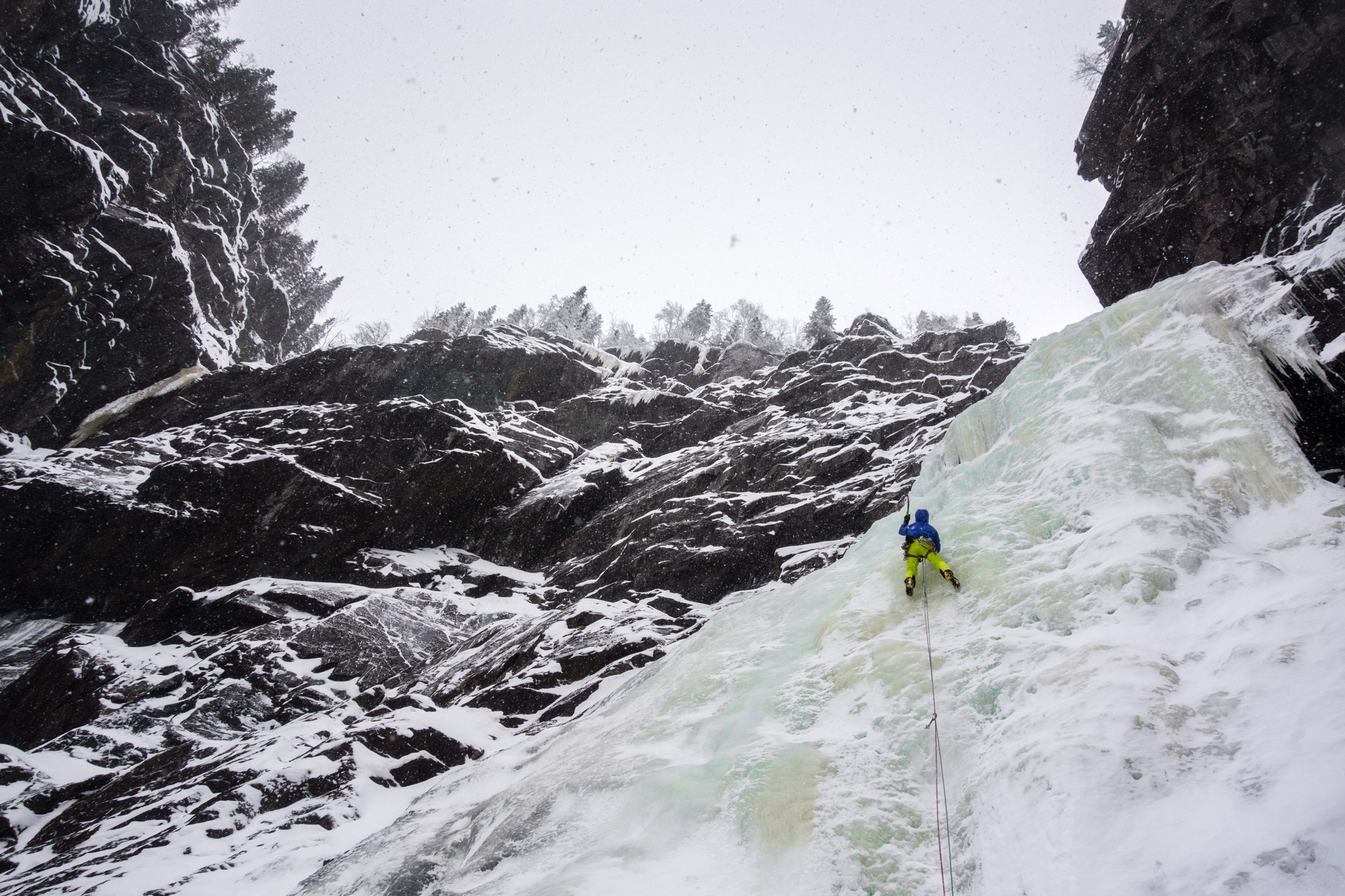 Andy climbed the first two pitches in a onner, heading straight through the steep bulges above to make a long and sustained pitch. The “walk off” from the top of Rjukanfossen consisted mainly of floundering in waist deep snow. It was very pretty though. Photo credit: Andy Inglis

Wanting a change of scenery on day 4, we sought out a venue that neither of us had been to before – Kong Vinter. The namesake route of the crag plus the sustained pillar of King Kong being the obvious targets. En route to the venue, situated outside of the Rjukan valley, we experienced a 5 degree temperature swing (in the wrong direction) proving just how well the main valley holds the cold air.

We slogged to the crag in deep, heavy snow and realised temperatures were slightly on the warm side. We abbed in nonetheless to the base of Kong Vinter and eyed the crusty carapace of crap that covered the ice – not inspiring! 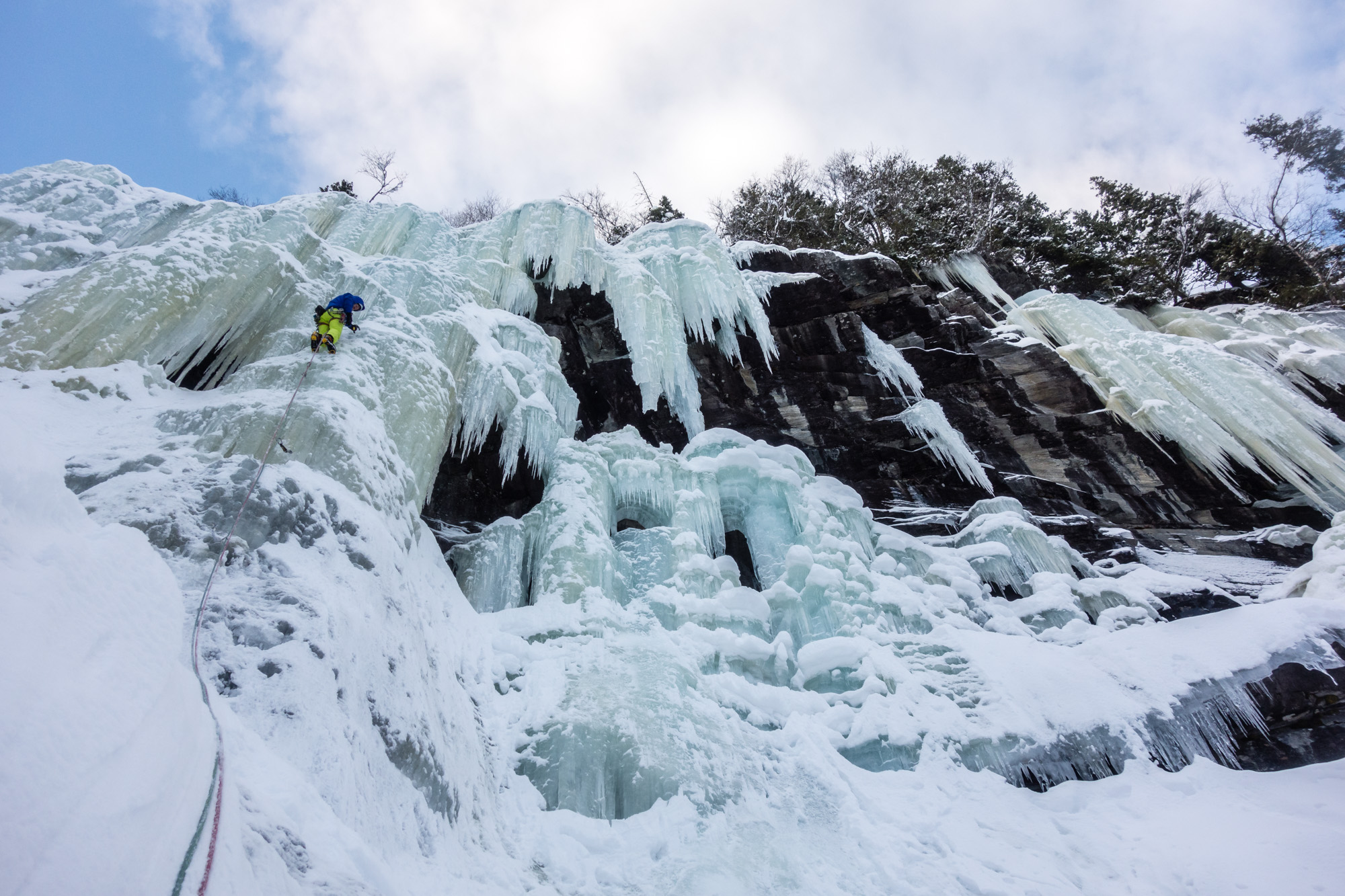 Andy leads the steep right hand side of the Kong Vinter icefall in a long single pitch. Ice conditions turned out to be very poor but the only way out was up! Wild Norwegian splendour on the walk out from Kong Vinter.

With time on our side we decided to snag a couple of routes at Krokan, I revisited an old classic while Andy opted for something slightly more sporting – Not Only a N(ice) Guy (M8), which involved some thin dry tooling on bolts to a spectacular hanging icicle finish. 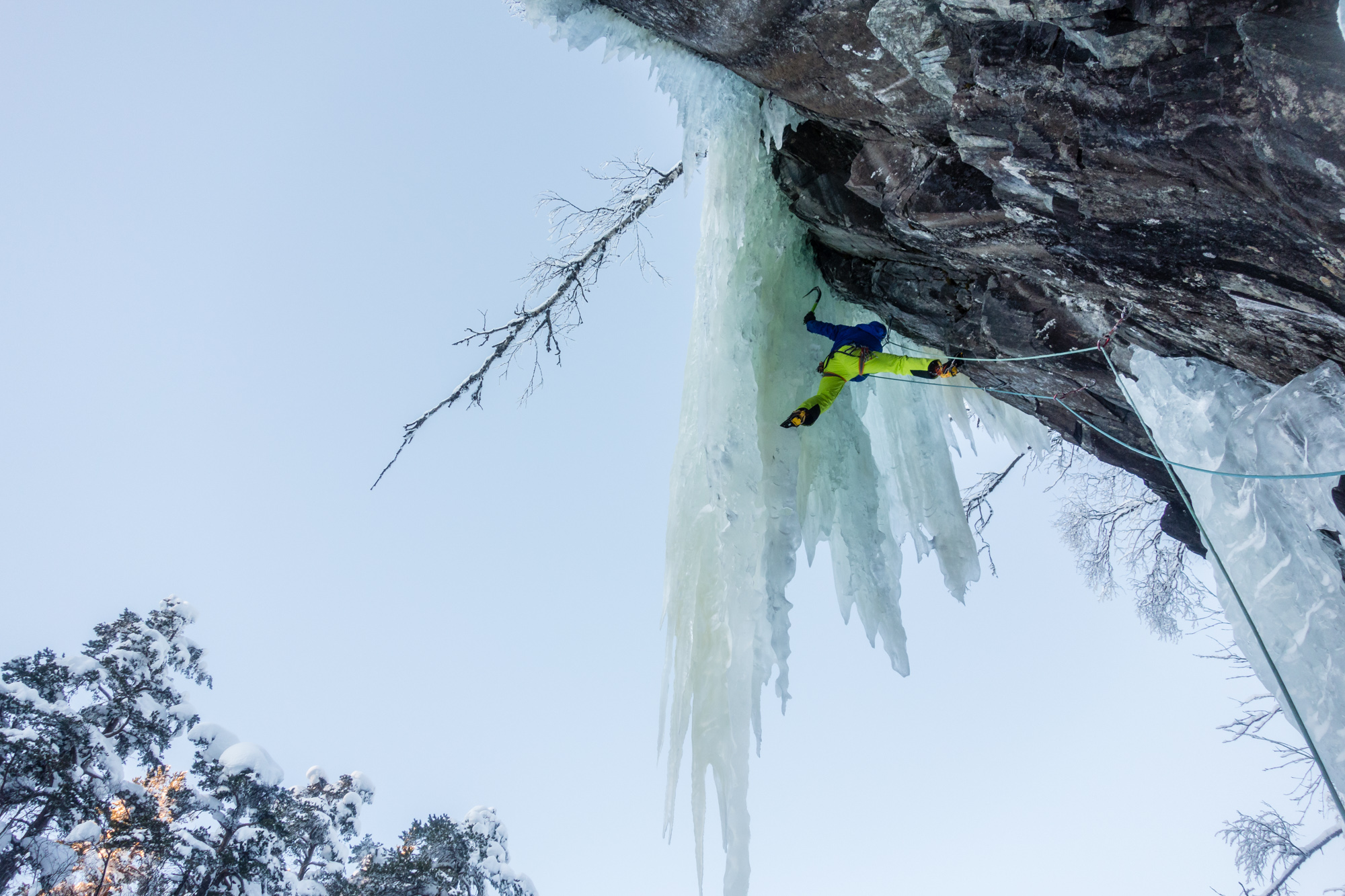 Andy transitions from rock to ice on a spectacular variation to Not Only a N(ice) Guy. From here he moved left around the curtain to climb the outside face of the icicle to the top.

For our last day we needed another big multipitch and so headed back to the amphitheatre at the top of the Upper Gorge for the aptly named Verdens Ende (WI5). We had got wind of the direct finish to the route being in climbable condition and were intrigued by a picture of a fragile-looking pillar leading past a roof. The End of The World, or the Upper Gorge at least. A very exciting route to end the trip on, consisting of steep, highly featured ice – spicy! Photo credit: Andy Inglis

The route was obviously climbable, but perhaps not at the given grade, with fragile and highly featured ice making the climbing very 3D but poorly protected. The first and last pitches were the obvious highlights with the long central section spoiled by bottomless snow and very wet ice. 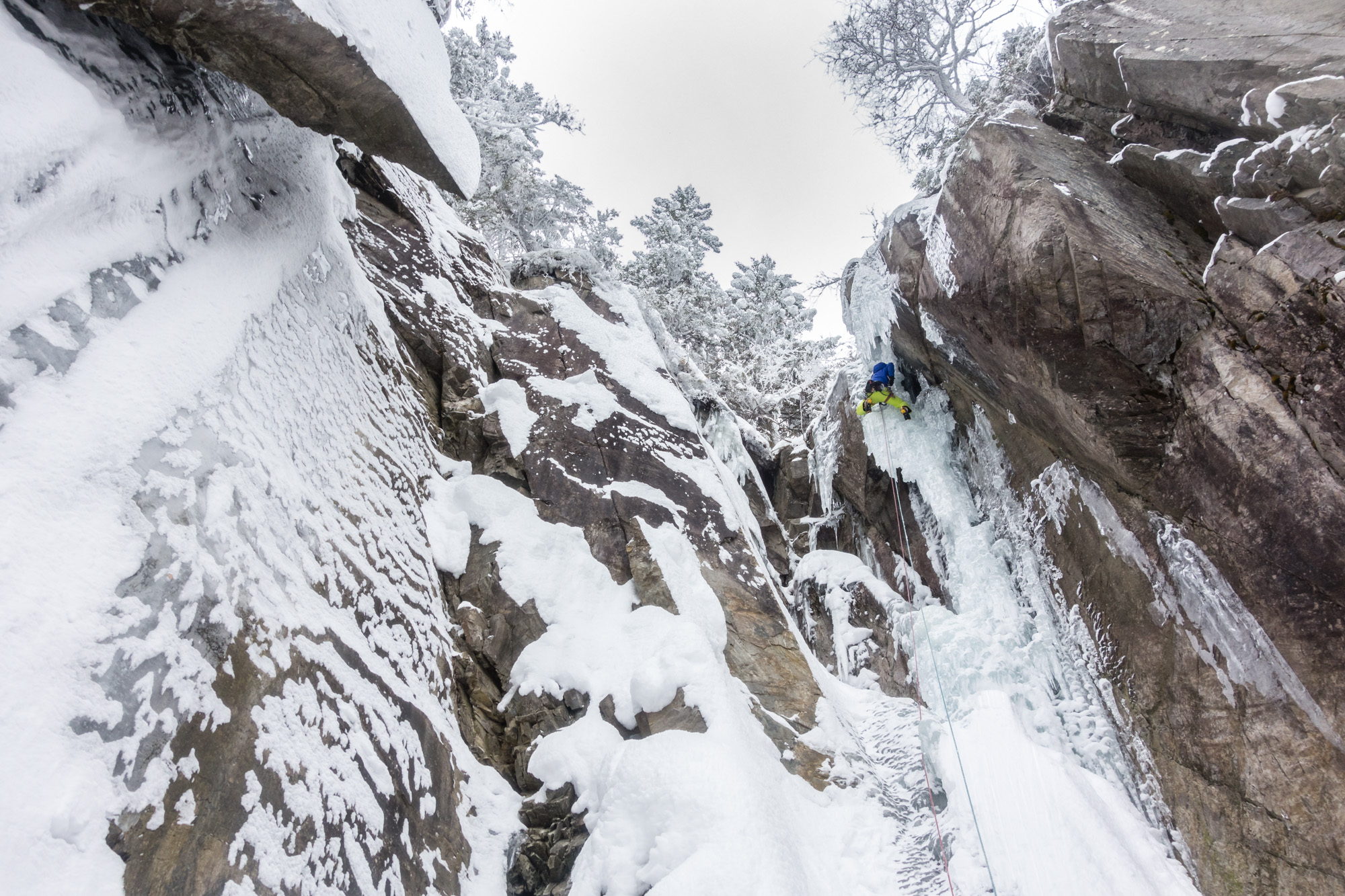 The spectacular direct finish to Verdens Ende was in climbable but thin conditions – a pitch I found harder than anything on Juvsoyla, but one that Andy led very steadily. 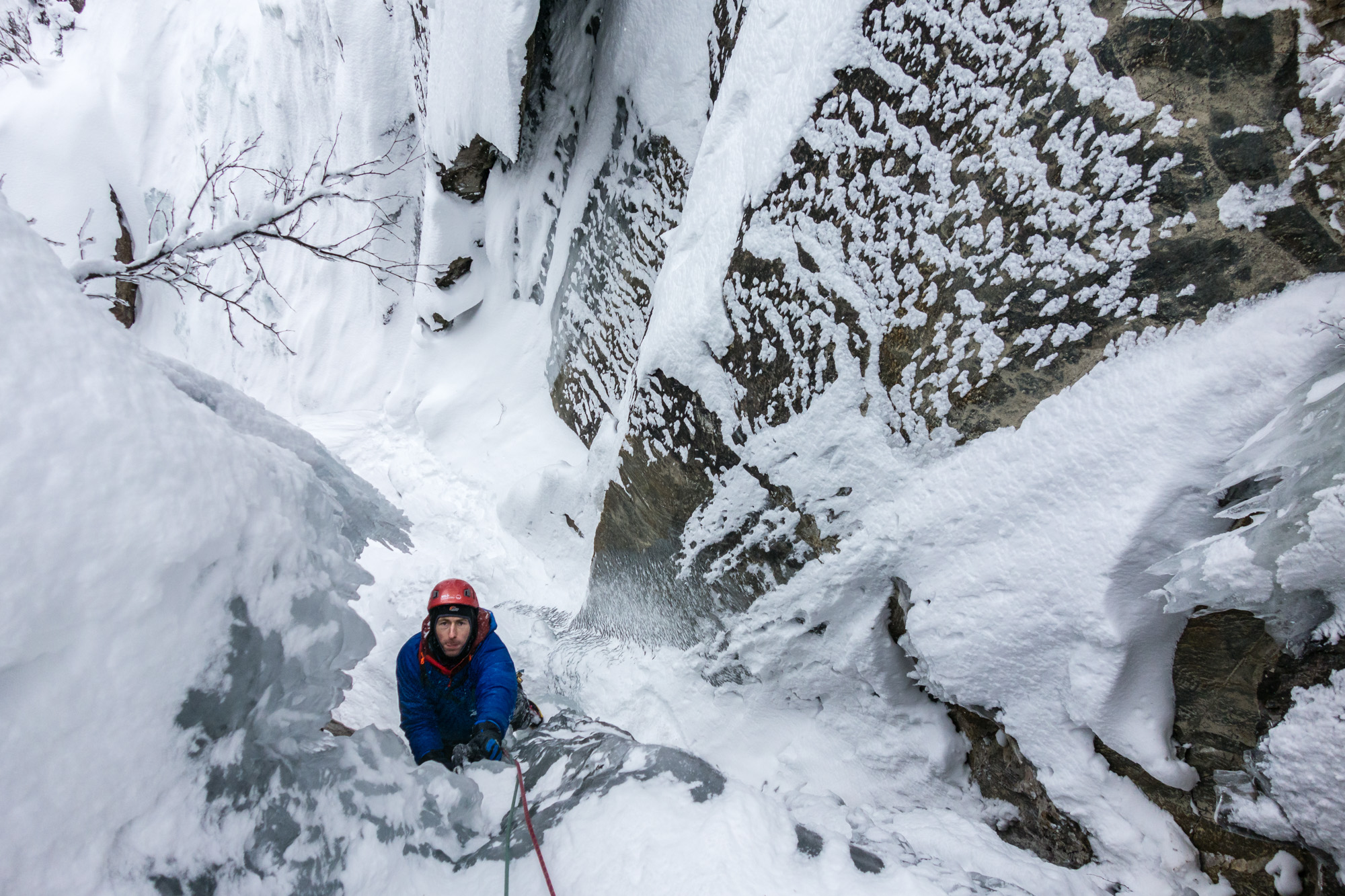 In what was fast becoming a recurring theme, I followed Andy up the final pitch to end the route (and a superb trip), utterly gripped.