As the mini beast from the east reigned windy terror at higher elevations, Ric and I sought shelter at low altitudes on a westerly aspect. We made for the classic No.6 Gully (IV, 4) on Aonach Dubh, which has been reliably in condition for much of this winter. With no winter routes to my name in Glencoe I was keen to get off the mark! 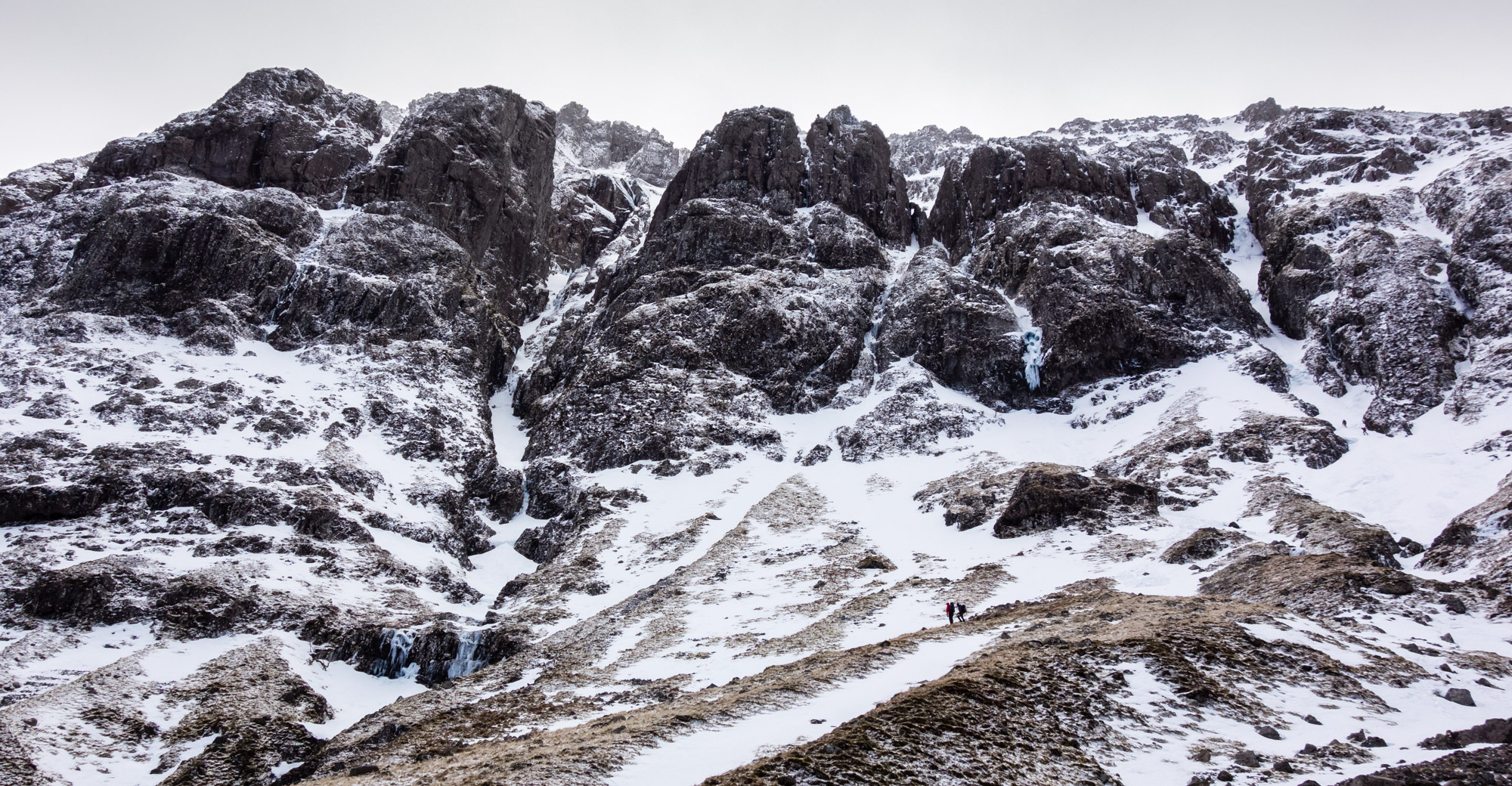 The complex West Face of Aonach Dubh with the obvious rift of No. 4 Gully centre-left and No. 6 Gully on the far right

The approach was a doddle and with only one fast-moving team of soloists ahead of us we were effectively first in line. We had feared it would be a popular choice and sure enough many teams soon joined the queue, some lamenting the wind-battering they had received the previous day on The Ben. 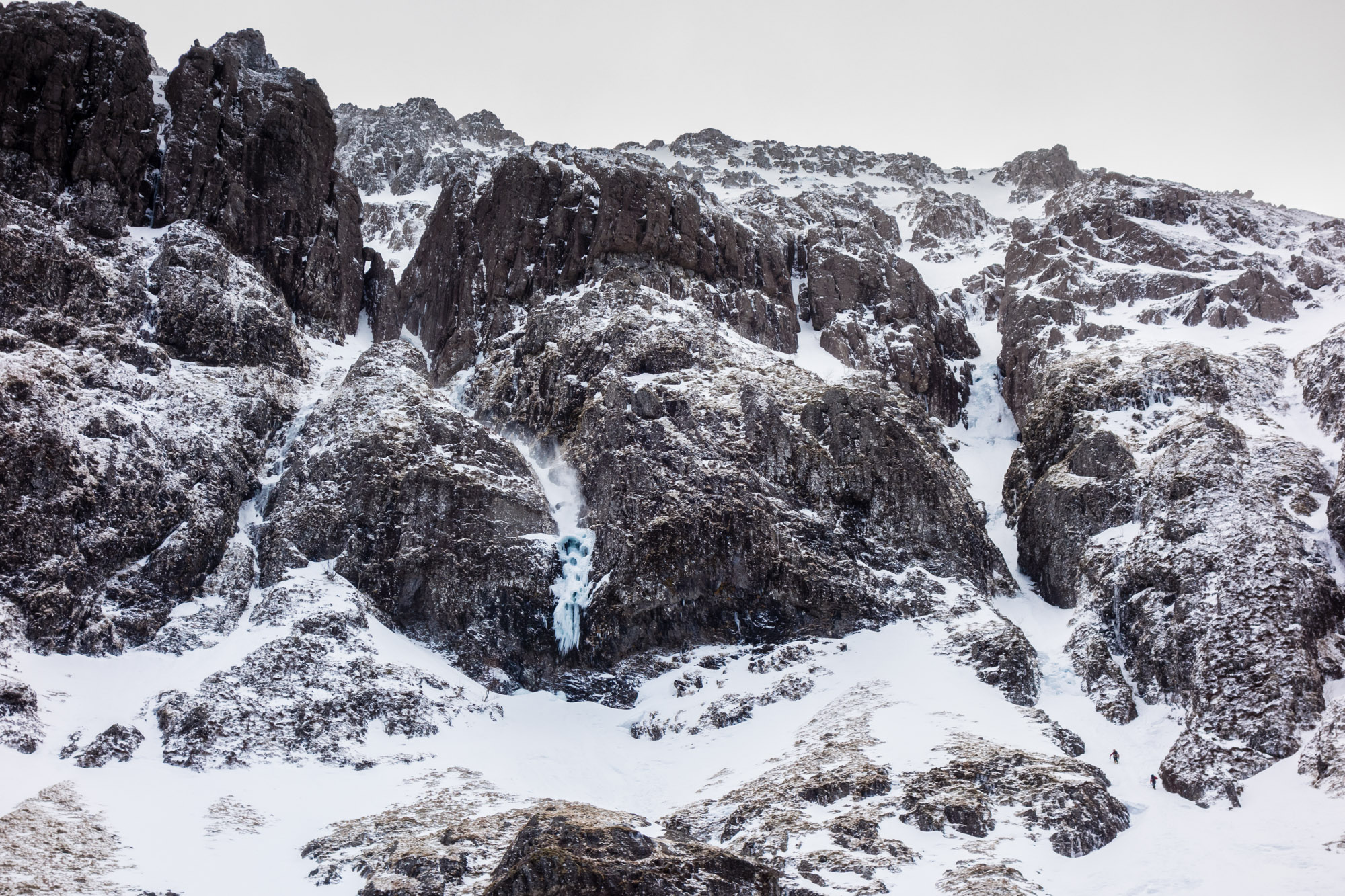 The horror-show of hanging daggers, ice umbrellas and spindrift is Elliot’s Downfall. The team ahead of us starting their solo to the base of the crux ice pitch in No. 6 Gully.

A slung sapling facilitated a long easy pitch with a short ice step. From there we could see more of the same all the way to the base of the main icefall; the gully was clearly well banked out. 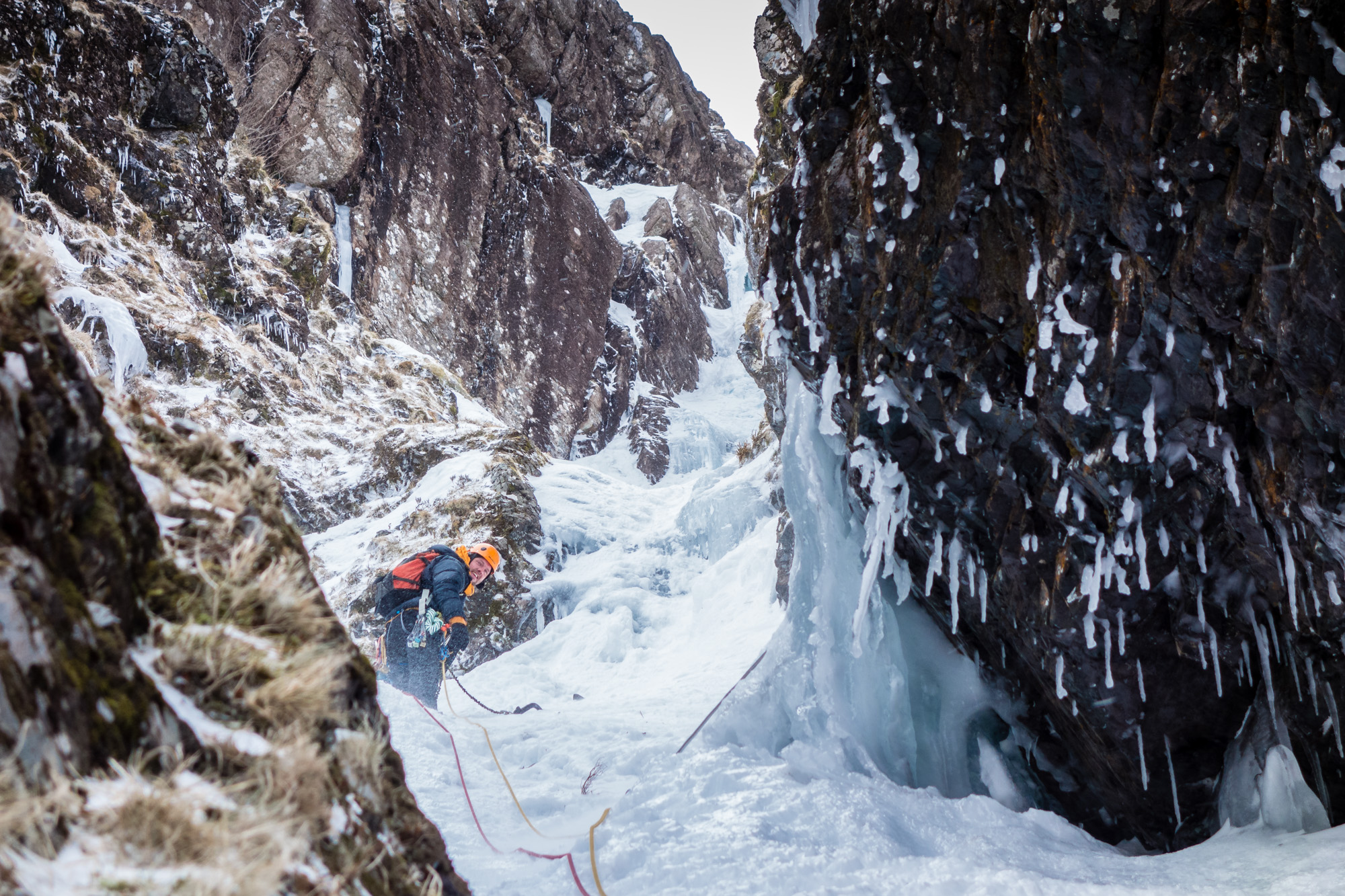 Ric enjoying himself in the mellow lower gully. After an easy sixty metres we moved together from this point, passing more icy bulges. 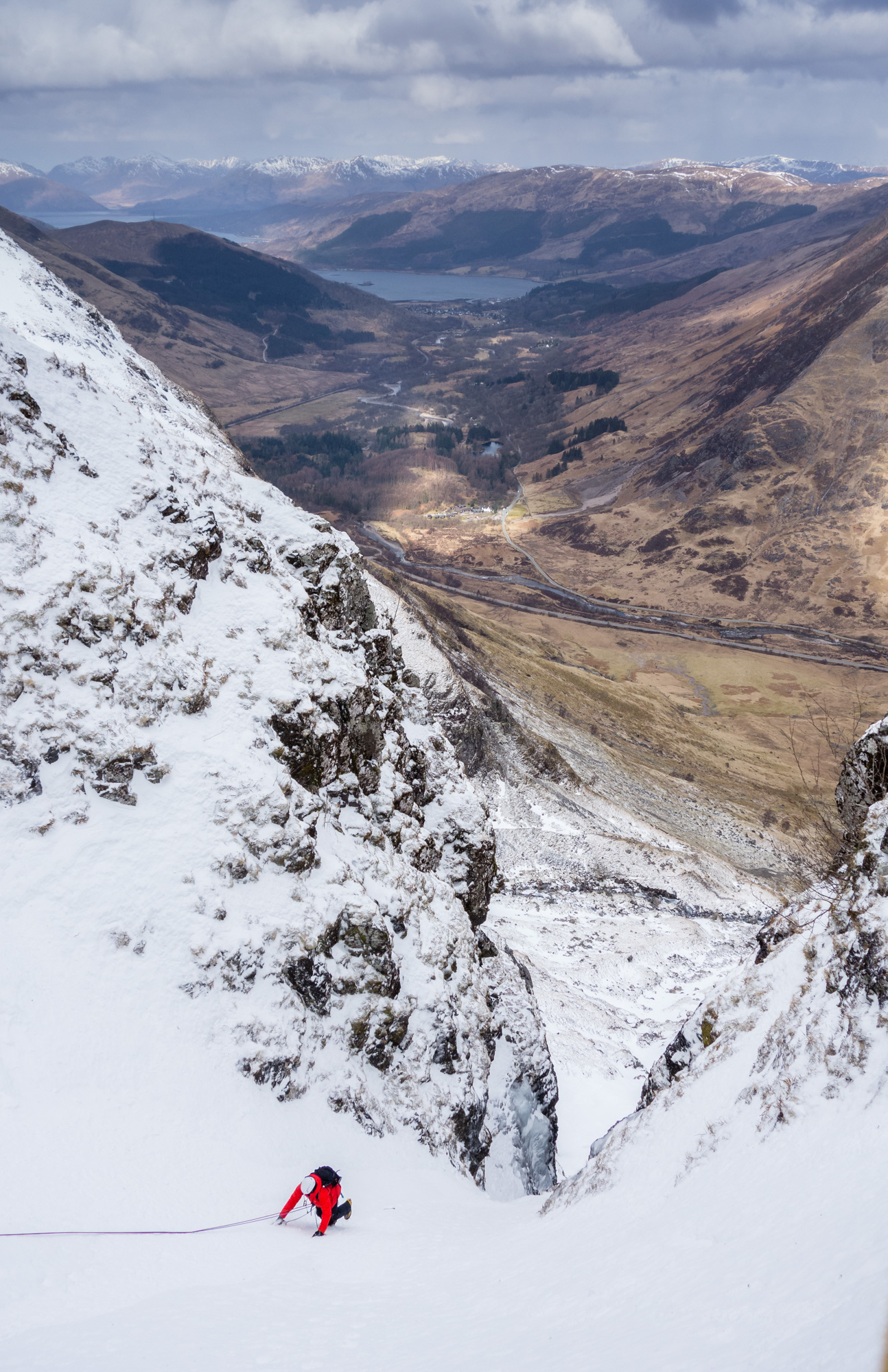 The team behind us finishing the second pitch with amazing views to Loch Leven and beyond. Photo credit: Ric Hines

While more banked out than I had seen in photos, the crux pitch was still clearly going to be the highlight of the route. The ice was nicely featured and a ramp led easily to a steep wall capped by a massive blue ice umbrella. Heavy traffic had left it quite stepped out, but this made the climbing feel more unnatural as I was coerced into using the footholds, rather than trying to maintain good technique. 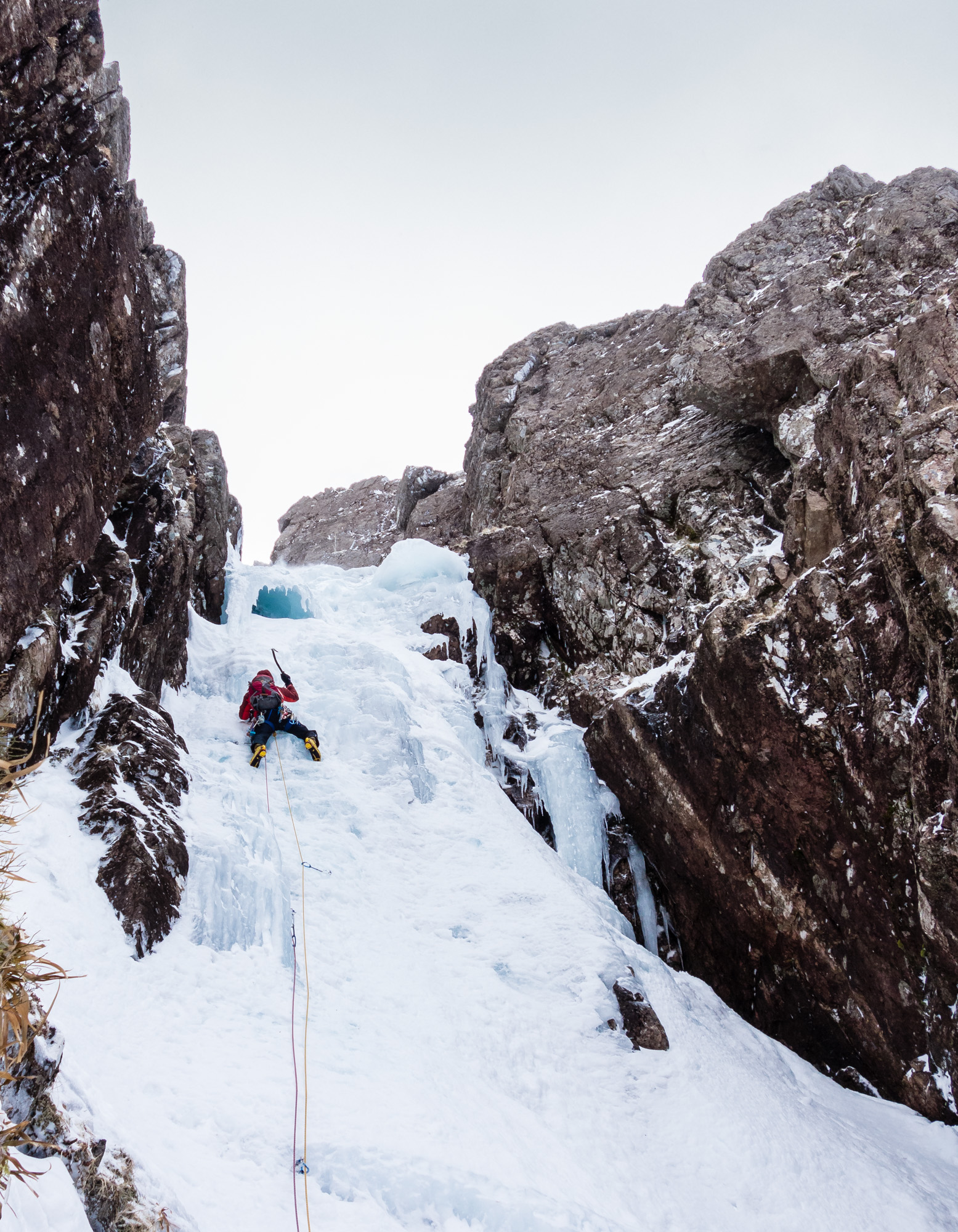 The crux pitch was a little shorter than normal but provided a good challenge nonetheless, thanks to variable ice quality and the need to pull some funky shapes to bypass the ice umbrella at the top. Photo credit: Ric Hines 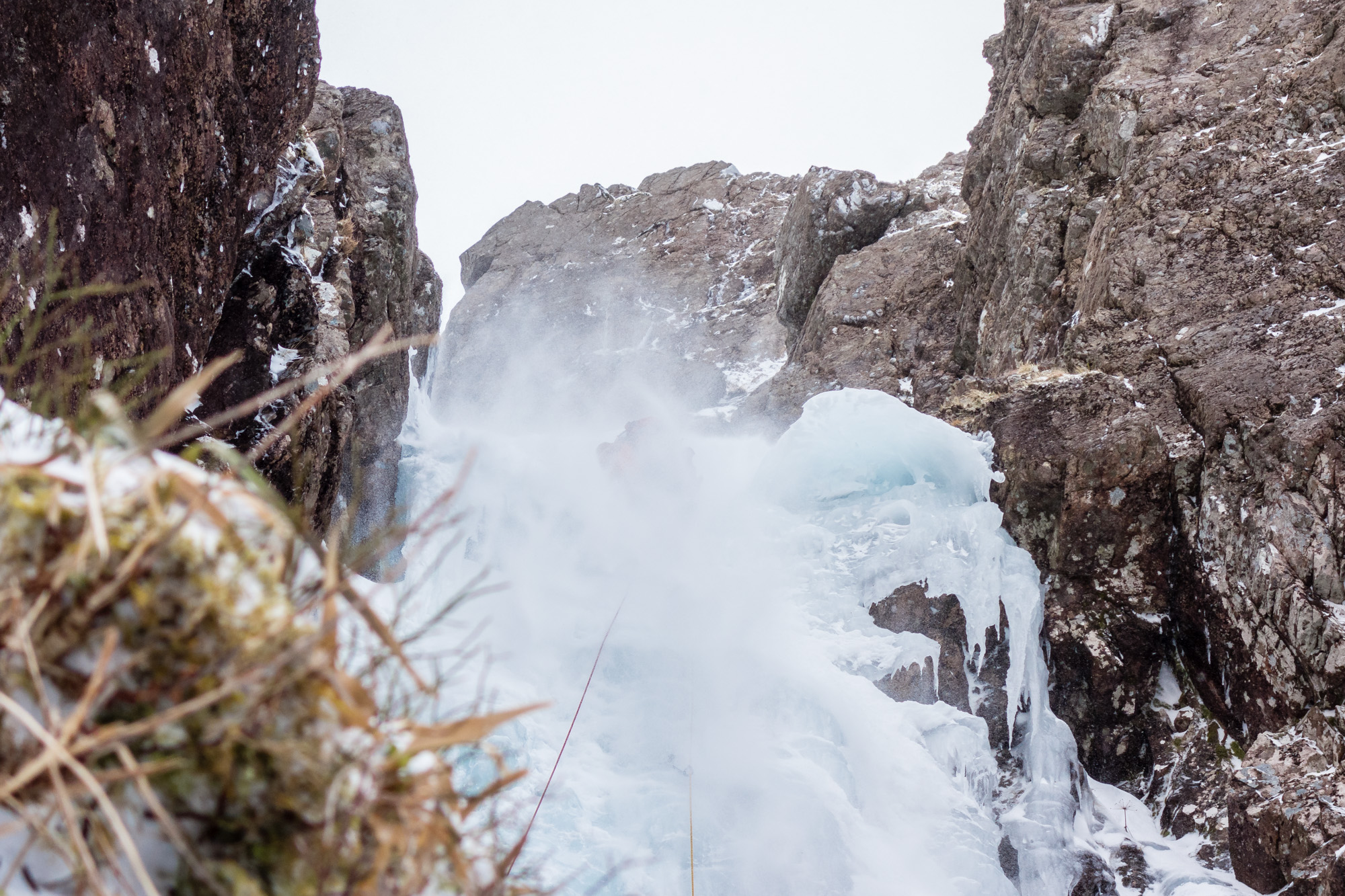 From the shelter of the belay Ric captures a refreshing spindrift shower, which felt like it lasted forever! Photo credit: Ric Hines

After a prolonged dousing in spindrift I eventually emerged above the ice umbrella and plodded a further thirty metres to a good rock belay on the right. Ric was quick to second and we began eyeing up the thinly-iced corner of the Direct Finish (IV, 5), which looked too good to pass up. Ric grabbed the rack and set off, surprised at the steepness once below the corner. 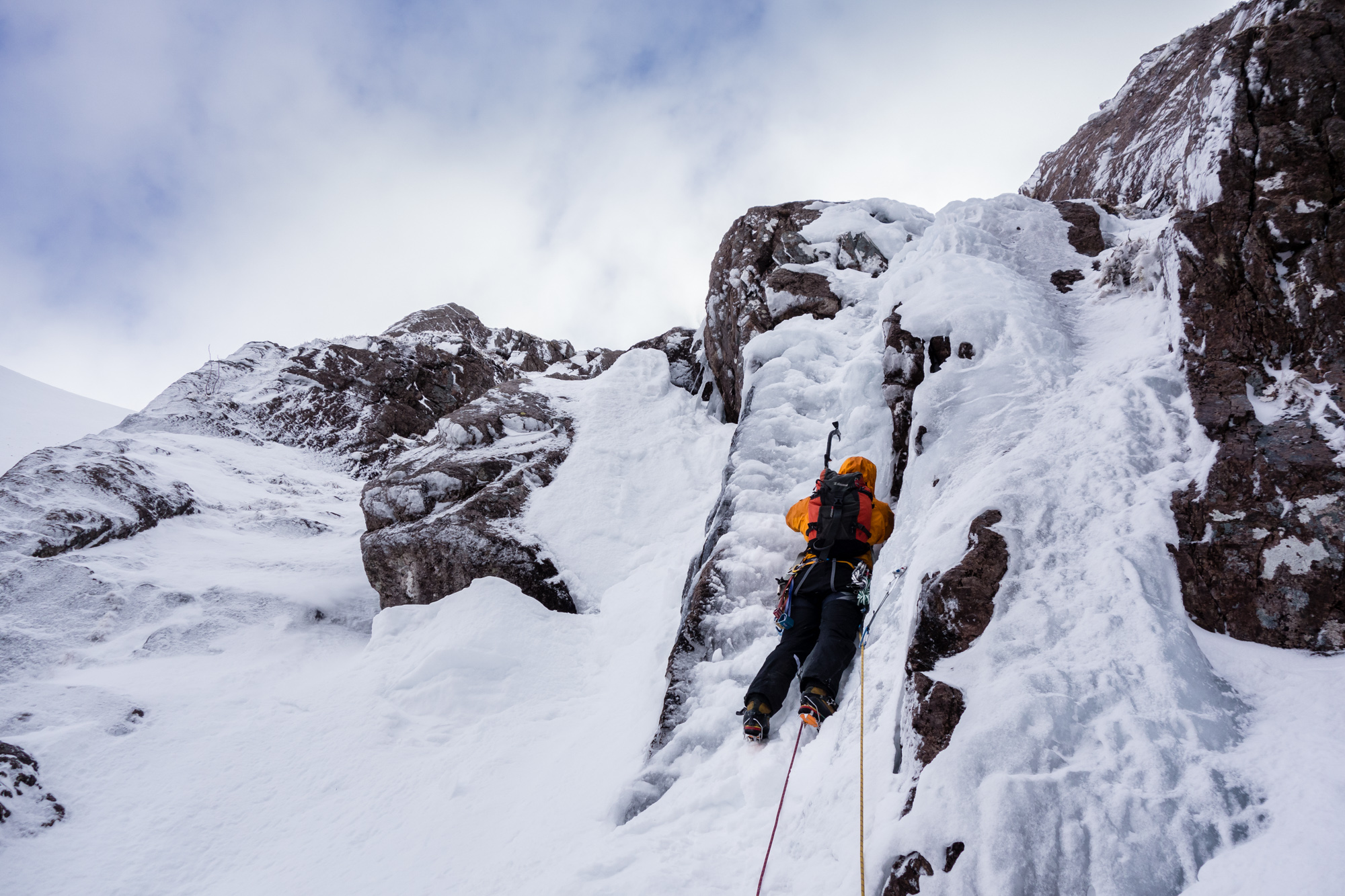 Ric lining up for the deceptively steep and awkward direct finish. The ice was chewy but a bit thin and picked-out for reliable screws. 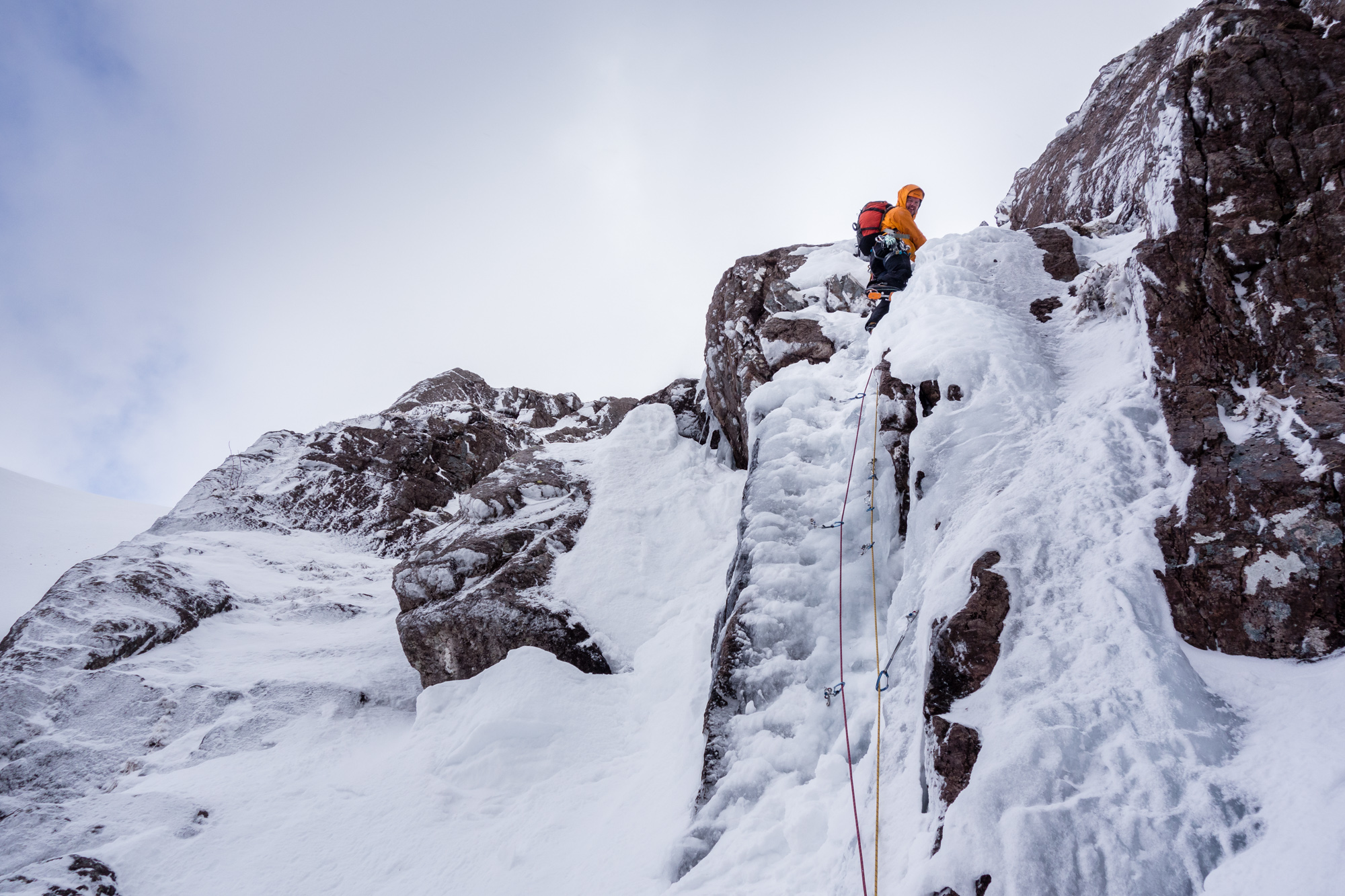 Ric happy to have finished the bonus final pitch; which turned out to be much harder than it looked!

Once above the gully we traversed right along the terrace but ended up following footprints a bit below the ideal line. Some messing around in broken rock bands ensued but eventually we debouched in Coire nam Beith and walked back round to the base of the crag. Long drives ahead precluded a second route but we were both really taken by the West Face and will definitely be back for more!