A very recent addition to the Misty Mountain Hop family meant an objectively hazardous alpine climbing trip wasn’t on the cards this year. Instead, some chilled bolt-clipping was in order  – and that is exactly what we didn’t get in the mighty Gorges du Verdon!

The trip was booked on a whim but the more we researched the more we read about the massive exposure, long runouts and ego-destroying grades. After a week of experiencing exactly that I can safely say it was one of the most humbling, but also one of the best climbing trips I’ve been on.

The mighty cliffs of l’Escales from the Belvedere de la Dent d’Aire. The cliffs are 300m high and there’s a further 250m  of vertical relief down to the river

We immediately fell foul of the stiff grading at the Felines sport crag, finding many routes desperate at the grade. Not the gentle introduction we were hoping for! The area had received so little rainfall of late that forest fires raged as we climbed, creating an unusual atmosphere. 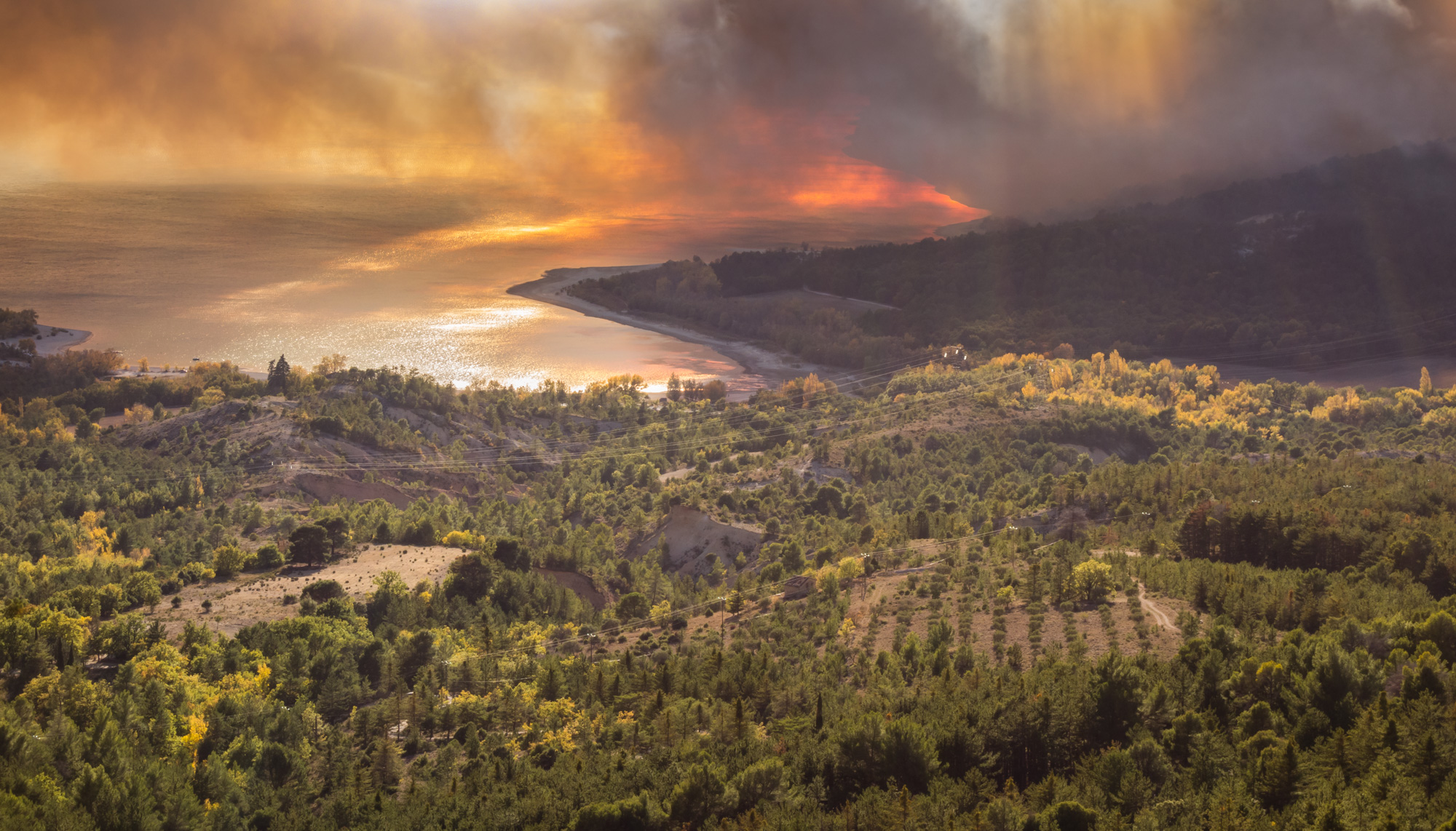 Day 2 saw us abbing in from the rim to the popular Les Dalles Grises (5c), although given the frigid temperatures and biting winds it was no surprise we had the place to ourselves. This served as a great moral booster and was much better than it looked from the abseils, sticking mostly to the clean rock. 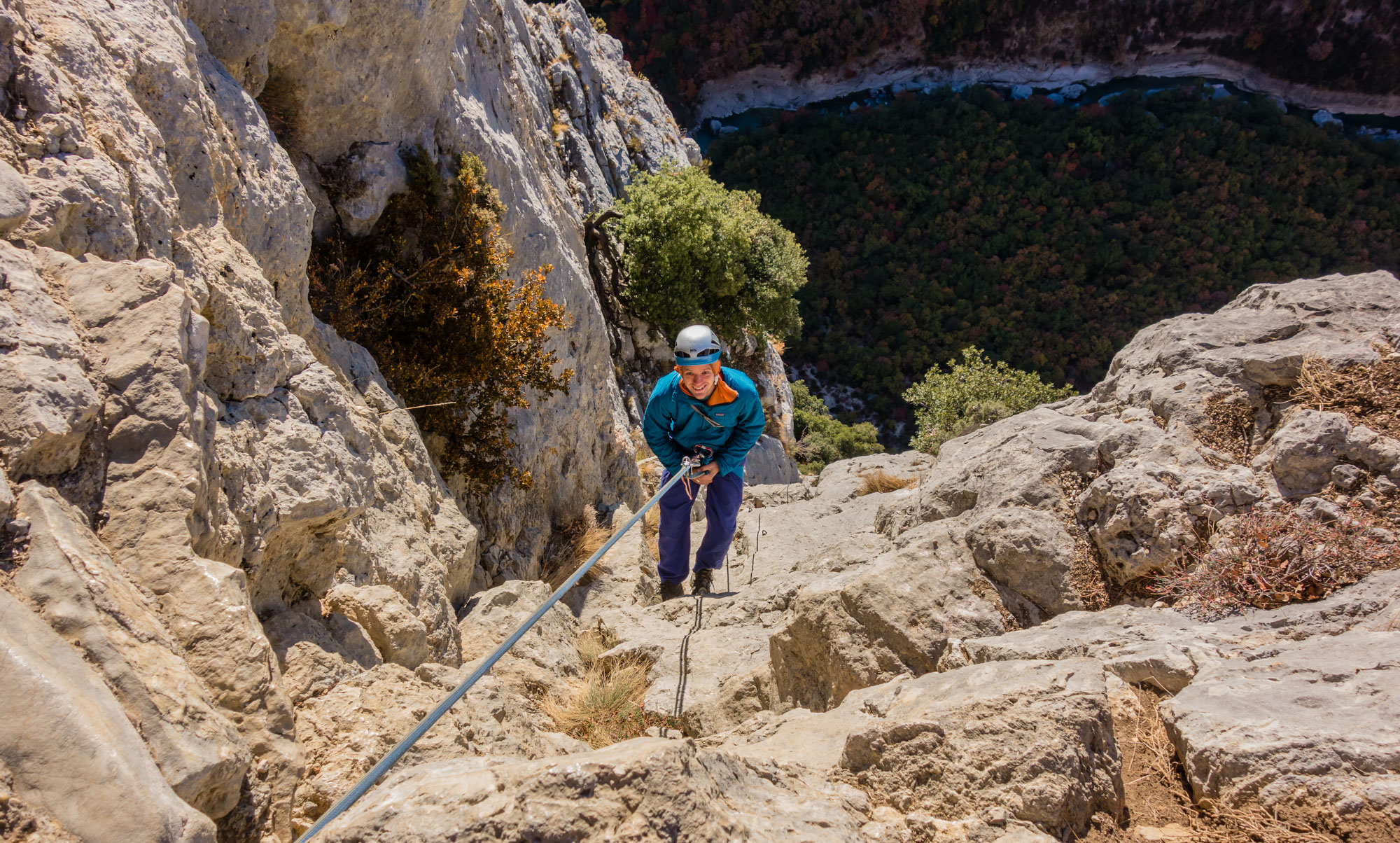 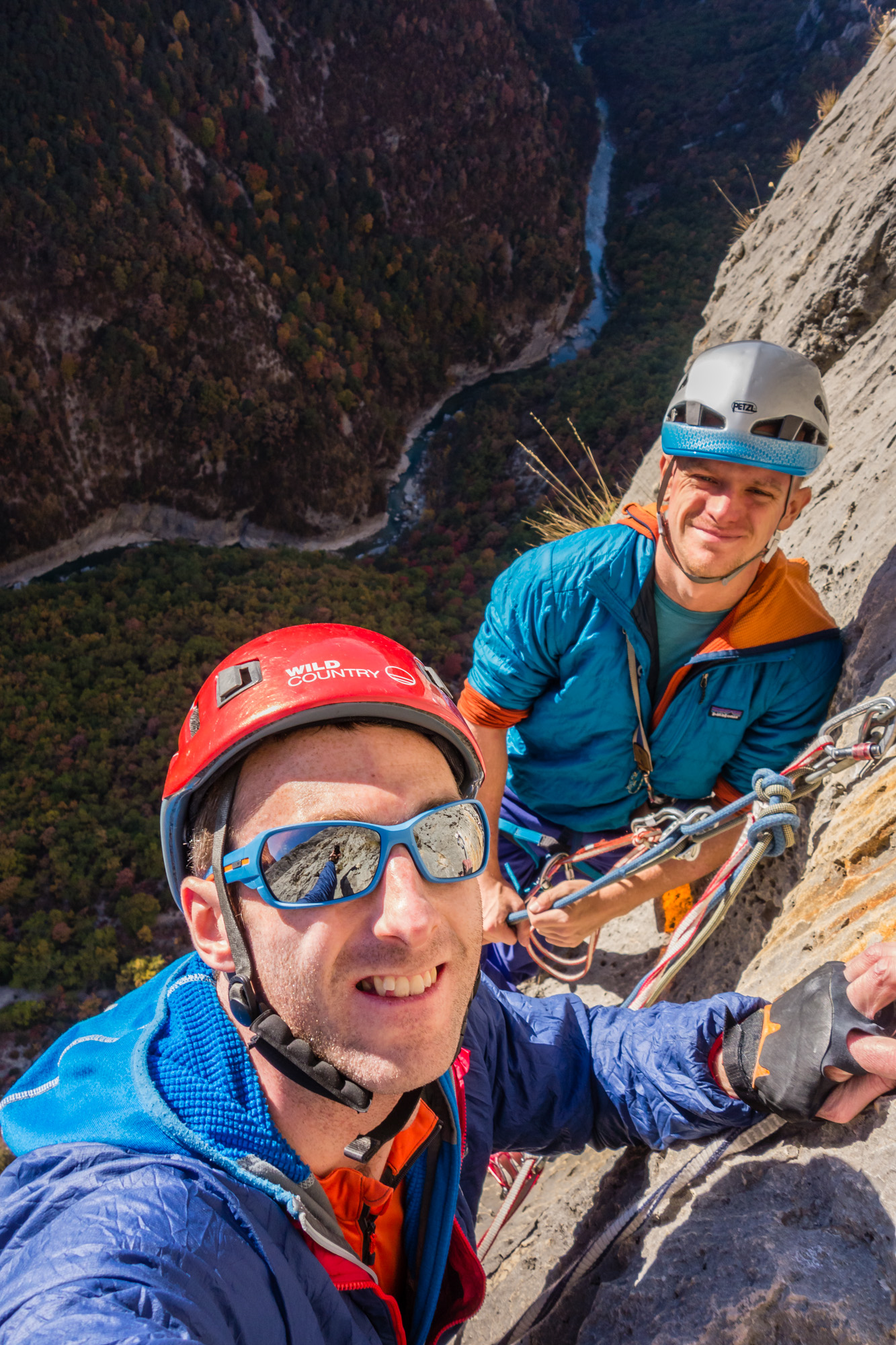 Ahhh that’s better! The sun eventually provides some warmth as we continue down 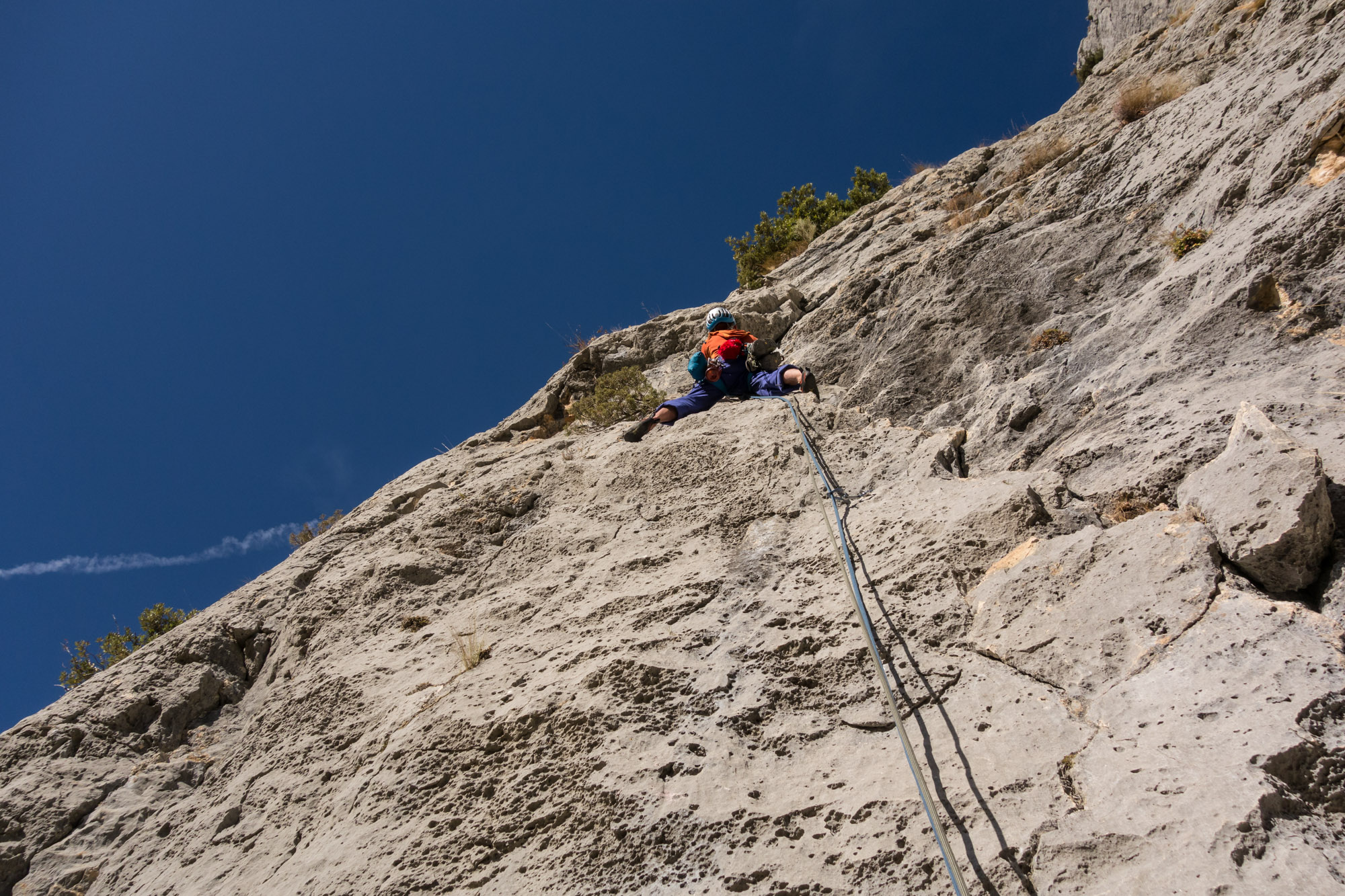 Immaculate rock, beautiful climbing and blazing sunshine – getting into the swing of things on the second pitch of Dalles Grises 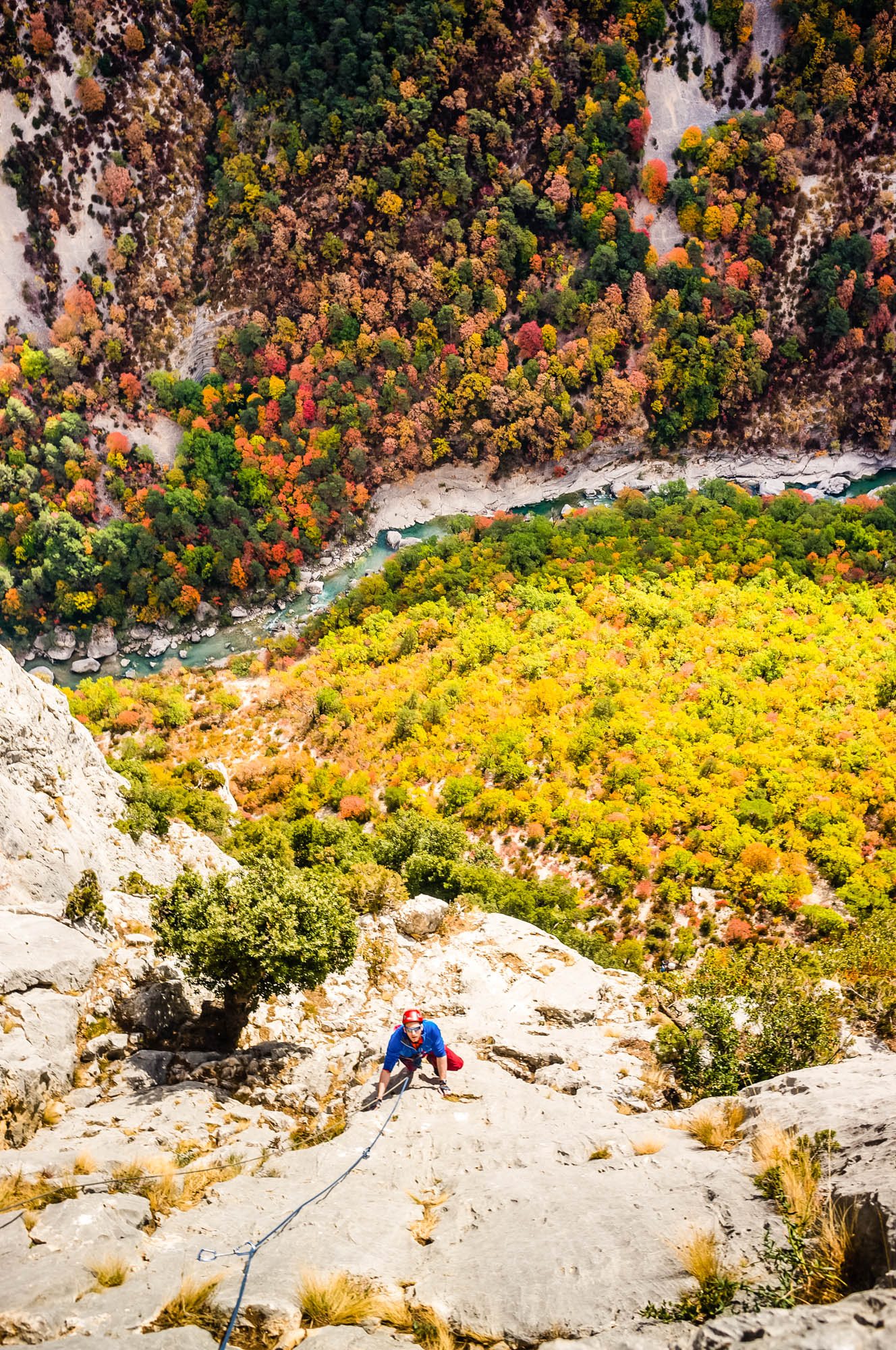 Despite some of the scrappy terrain hereabouts, Dalles Grises sticks mostly to lovely clean rock. Of course the views aren’t half bad either… Photo credit: Andy Harrison Buoyed by our rapid ascent and a great forecast for the next day we decided to recce the approach to La Demande (6a/6b+), a series of notoriously polished cracks, chimneys and offwidths running the full height of l’Escales. We were aware of the routes reputation but maybe not quite prepared enough…. Stunning autumnal colours in the gorge, en route to the base of La Demande 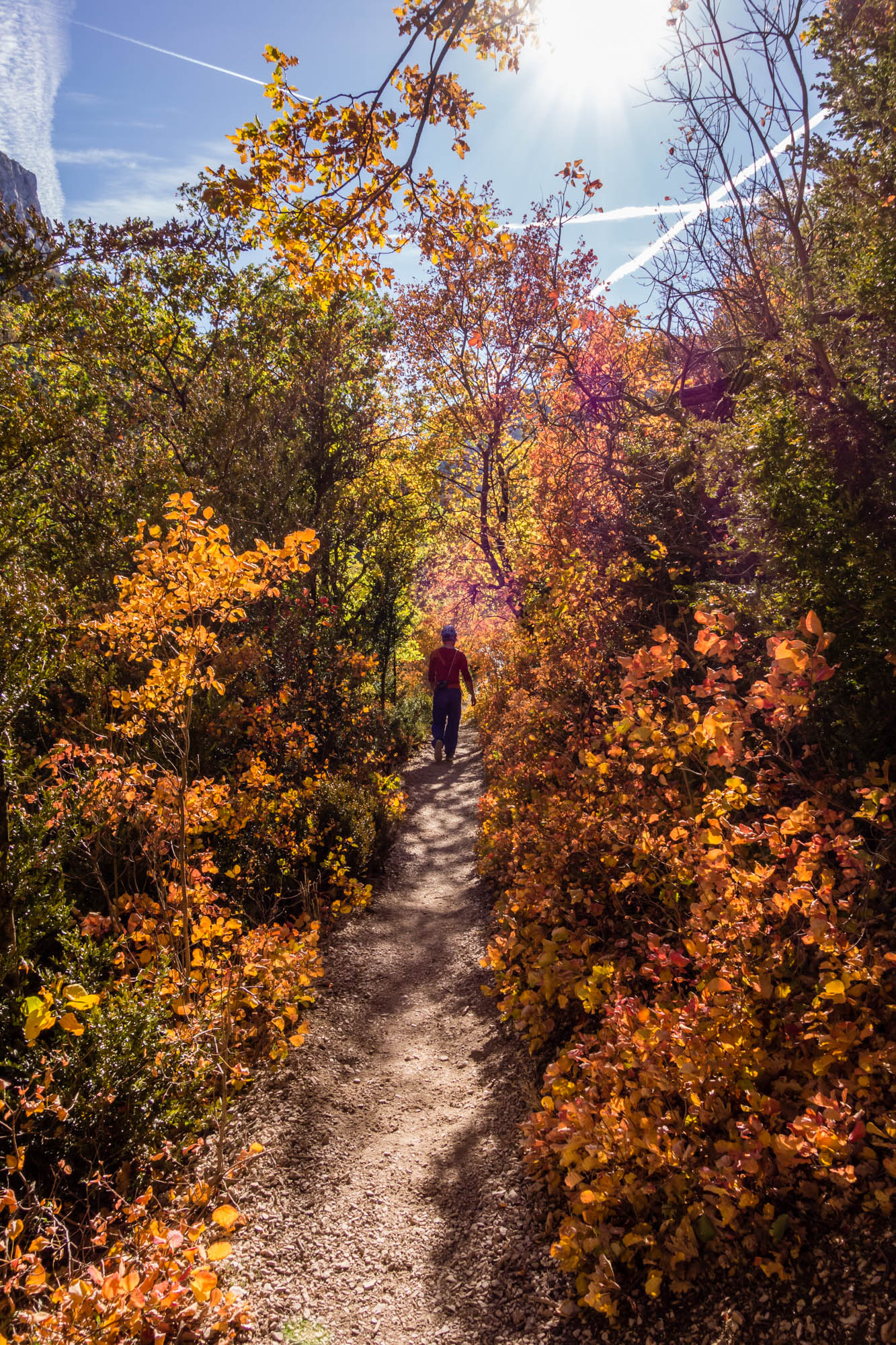 Is this a dream? Unreal scenes in the hidden depths of the gorge The ramp and crack line of La Demand’s lower half. The route follows horrendously polished cracks on the right hand side of the pillar in the foreground 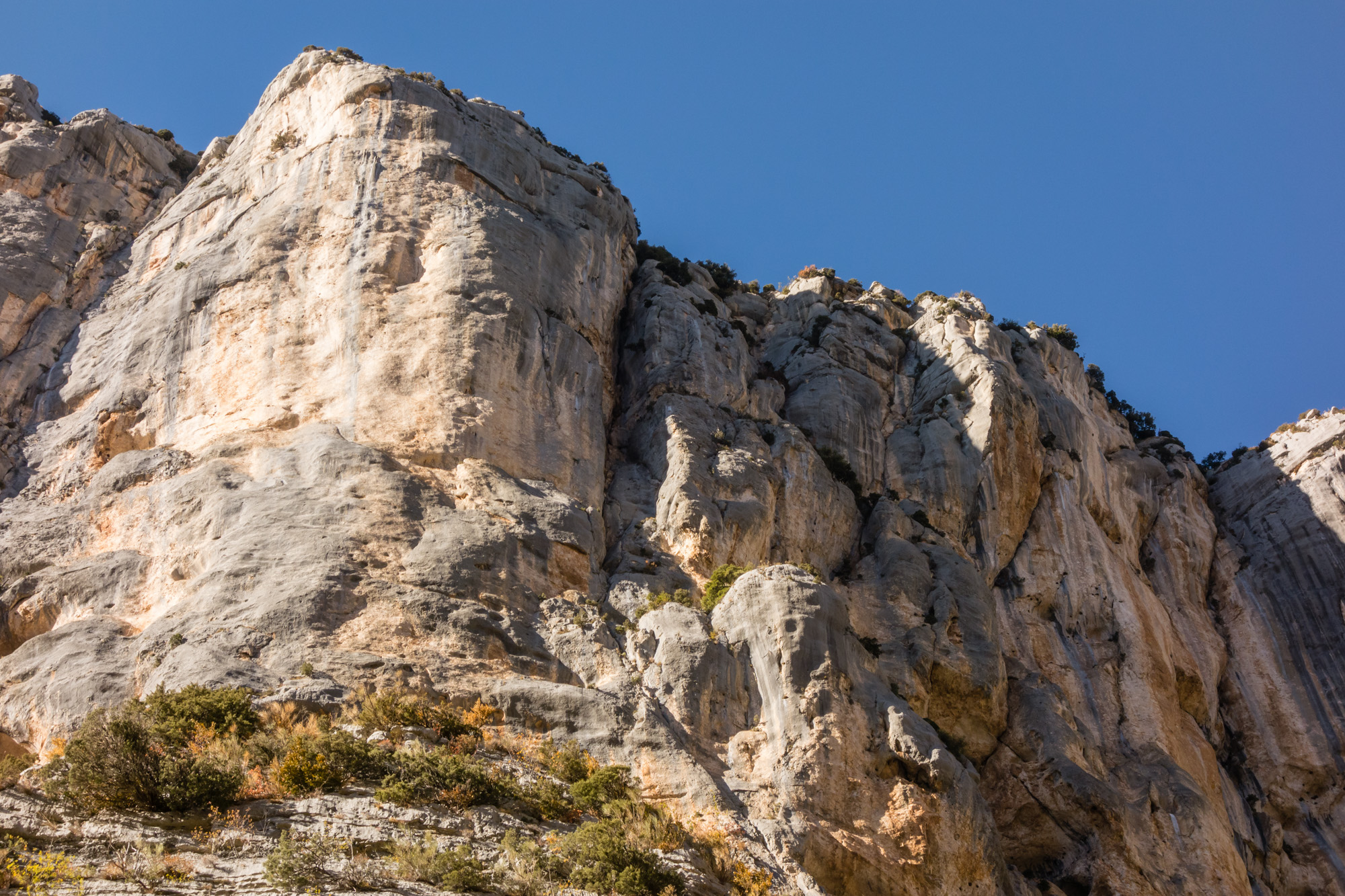 It was -2 degC the next morning when we arrived at the Couloir Sampson parking and after waiting for the thermometer to hit a balmy 0, we headed into the gorge. Andy got us off to a great start but I struggled to second quickly with cold bleeding hands and the pack. A short bold wall at the start of the second pitch required me to get my act together to deposit us at the base of some obviously difficult climbing. 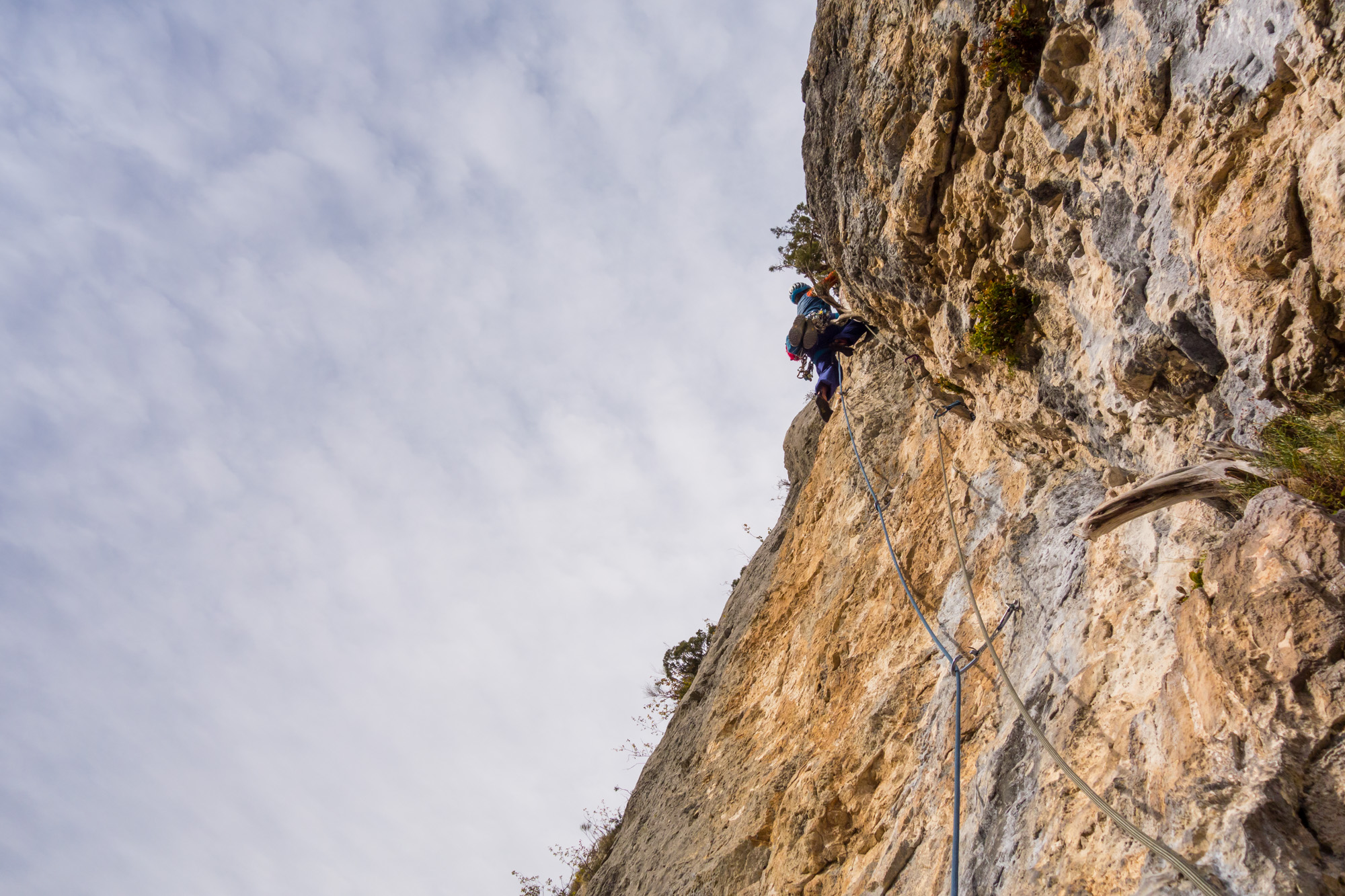 Andy battling valiantly up the pitch we dubbed ‘the vertical soap pitch’. This section was (quelle surprise) polished and very technical and we were later informed by some trustworthy locals that it deserves a modern 6b grade

After taking exactly twice as long as planned and having much less fun than we should have been, we decided to call it quits before an epic and almost certain benightment ensued. We thought that to move well and climb this route safely and in good style, a party should be experienced at E2 UK mountain trad. 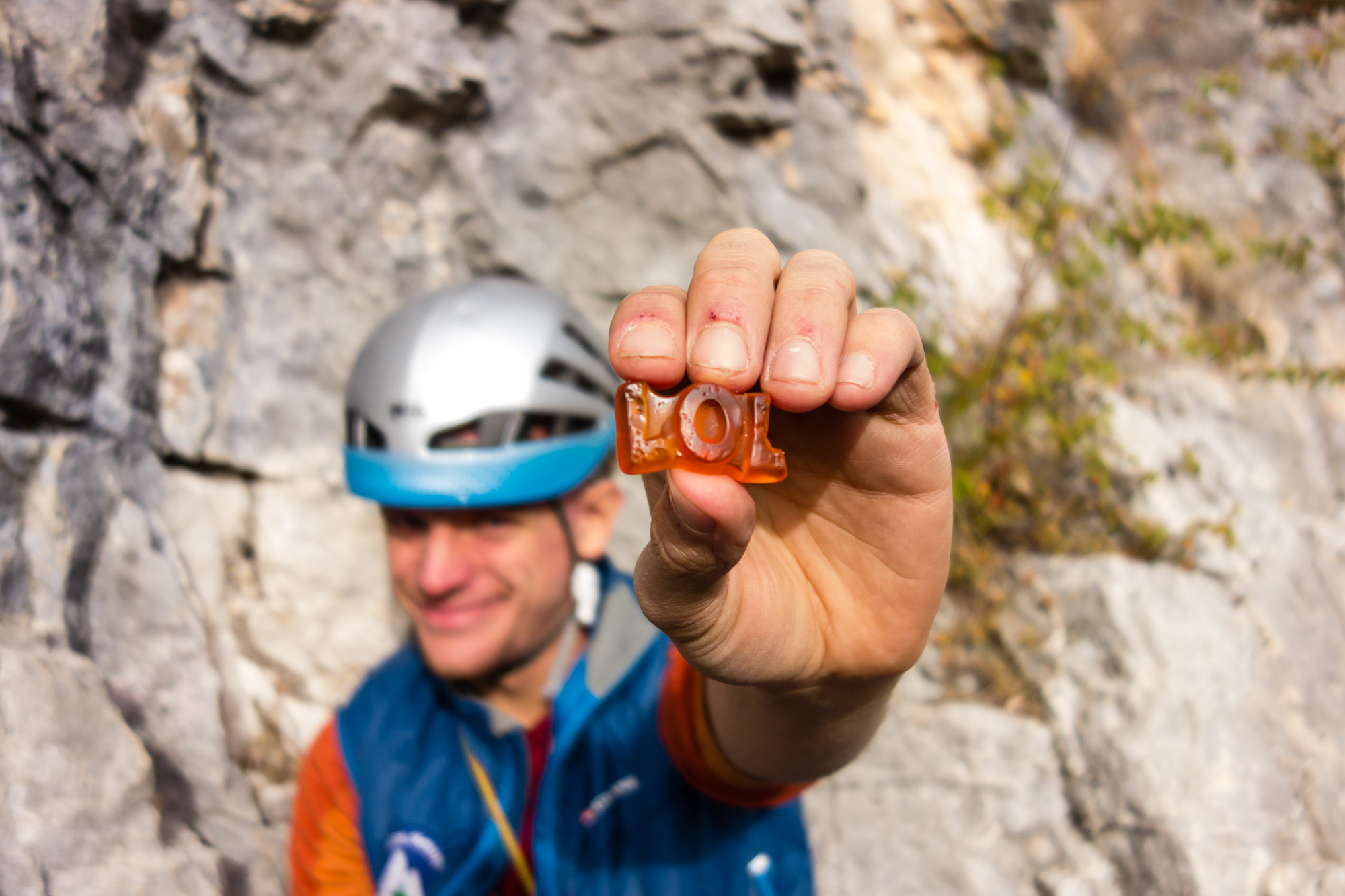 Our thoughts on La Demande expressed through the medium of Haribo

Not to be deterred, the next day we headed back to the Dalles Grises area for the 6 pitch route Cocoluche (6a). This went much smoother and we both agreed it was a step up in difficulty and quality from Les Dalles Grises. Fantastic slab and face climbing on the second pitch of Cocoluche. Getting our mojo back after the horrors of La Demande! Getting a taste of les gouettes d’eau on the crux section of Cocoluche. Photo credit: Andy Harrison

On top for lunch we decided to sample some of the single pitch delights that can accessed in an abseil from the rim. Some seriously exposed cragging! 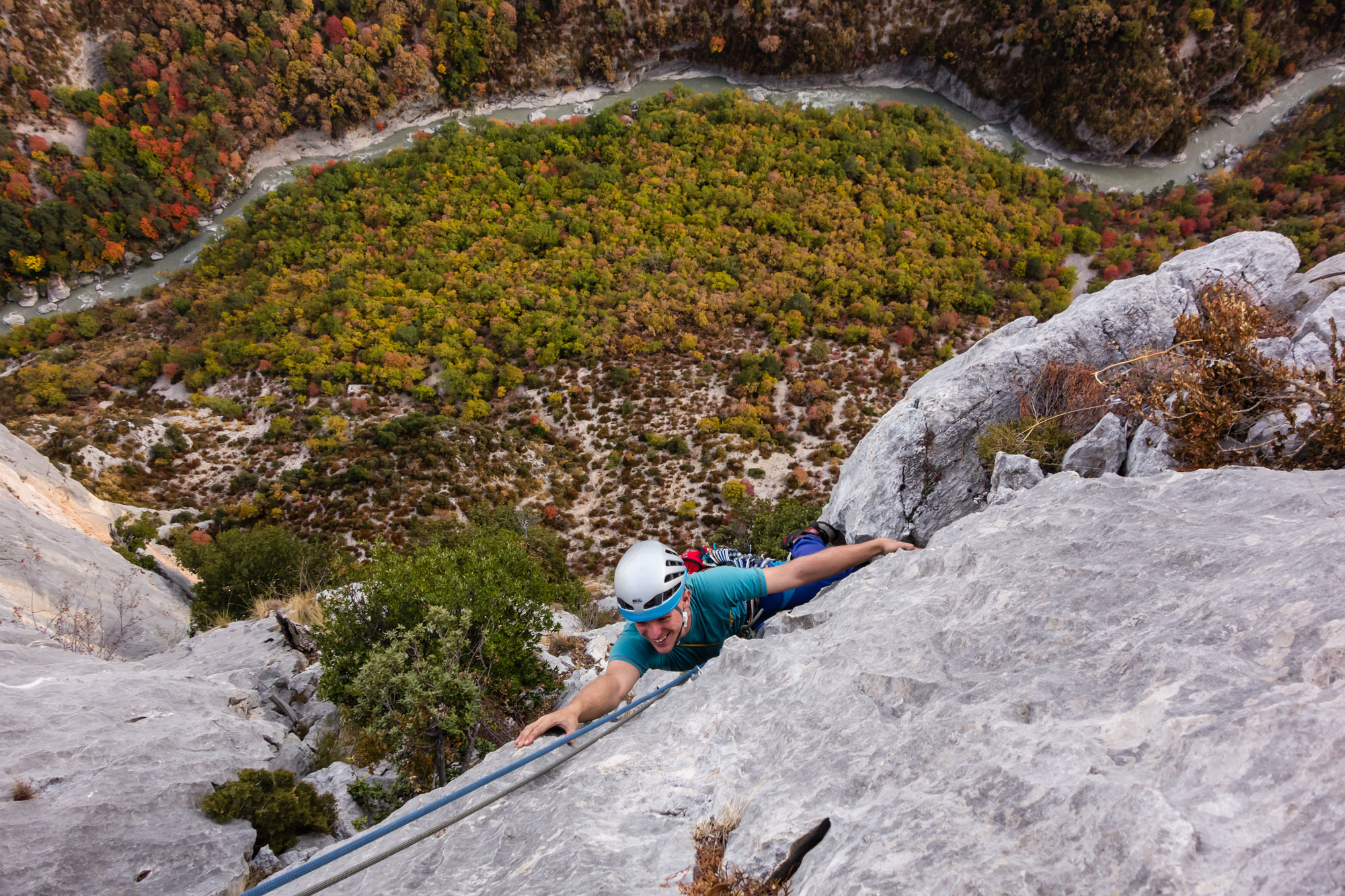 Next day it was back to the same area to complete the trio with an ascent of Afin que nul ne Meure (6a+), which roughly translates as ‘you will not die’… With relatively modern bolt spacing (by Verdon standards) this route was a very enjoyable voyage containing a mixture of styles across its 5 excellent pitches. We were joined by Luke Wigham (who Andy had kindly rescued from a sticky situation earlier in the trip) which made for a nice sociable climb – the highlight of the trip!

After 5 days on the trot we were feeling tired, but we couldn’t let our final day slip by without some more space-cragging! The route choice was easy – the world’s most exposed 6a, Wide is Love. Andy at the hanging stance after one very exciting abseil! 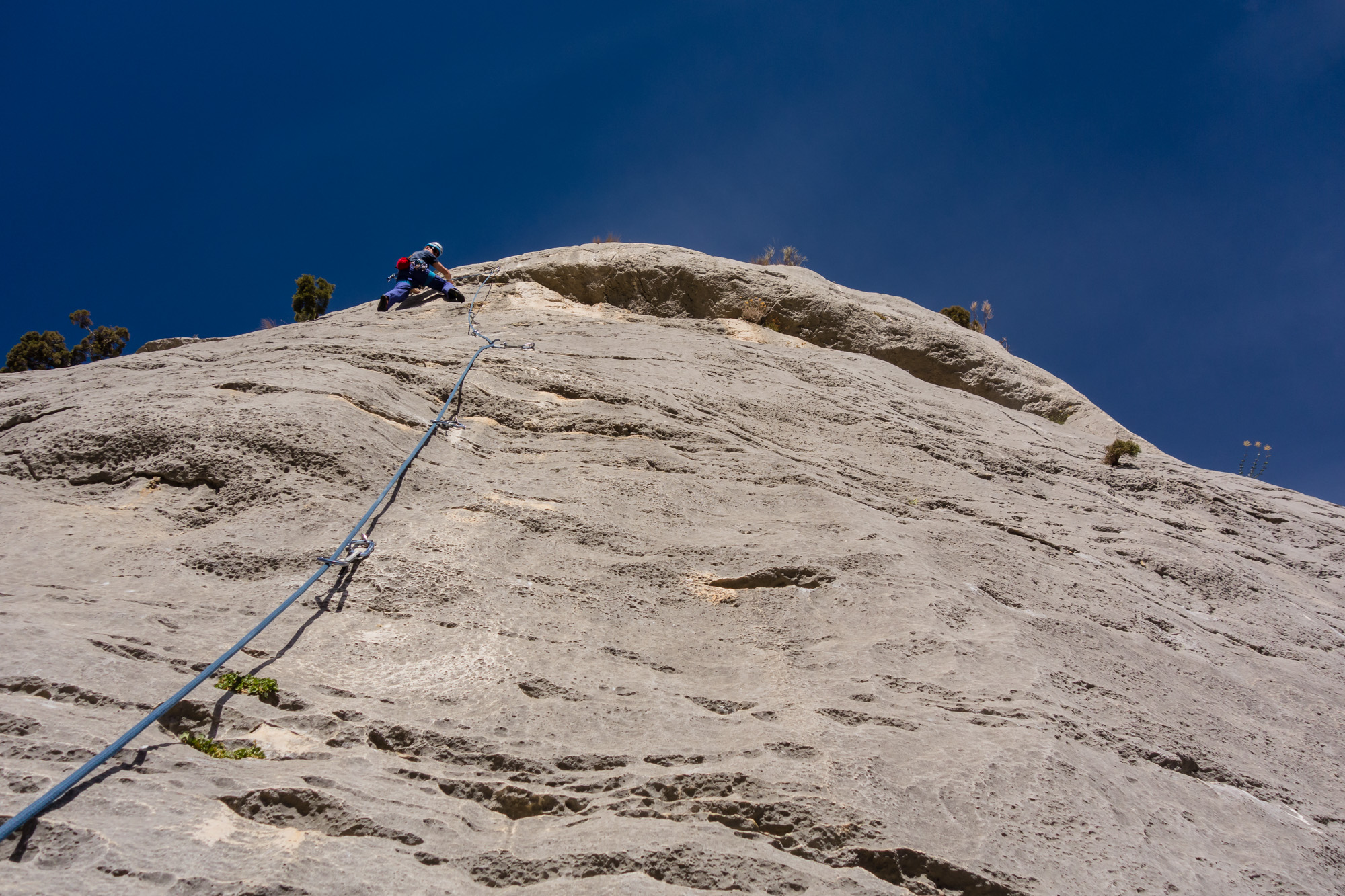 Andy cruising the juggy finish of an incredible pitch

So after a week of perfect weather and perfect rock we eventually hit our stride, and as is always the way with these things it was promptly time to head home. What a way to finish the holiday though – one last trip back from the edge!