Debs and I fancied a change this weekend and swapped the ice and crowds of Ben Nevis for the solitude of the North West Highlands. With a stunning weekend of weather in prospect a big ridge traverse felt like the right thing to do and the pinnacles, aretes and towers of An Teallach fitted the bill nicely. We camped in Gairloch and sandwiched between two days of relaxed cragging in the sun, we completed the traverse in what’s best described as “alpine” conditions – mostly dry rock with some icy snow on shaded slopes and soft spring snow in the sun. 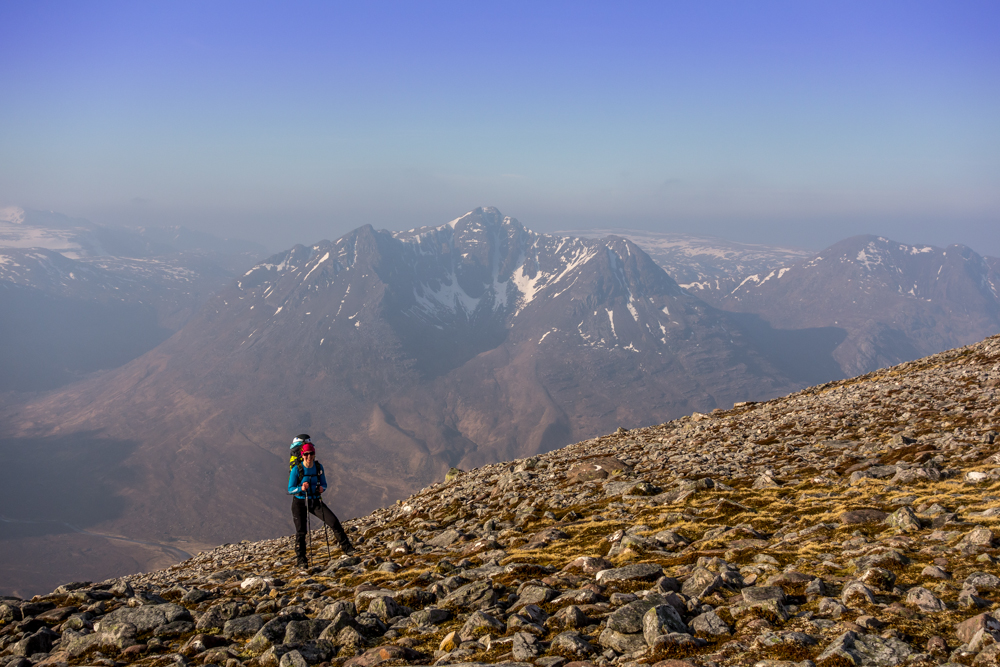 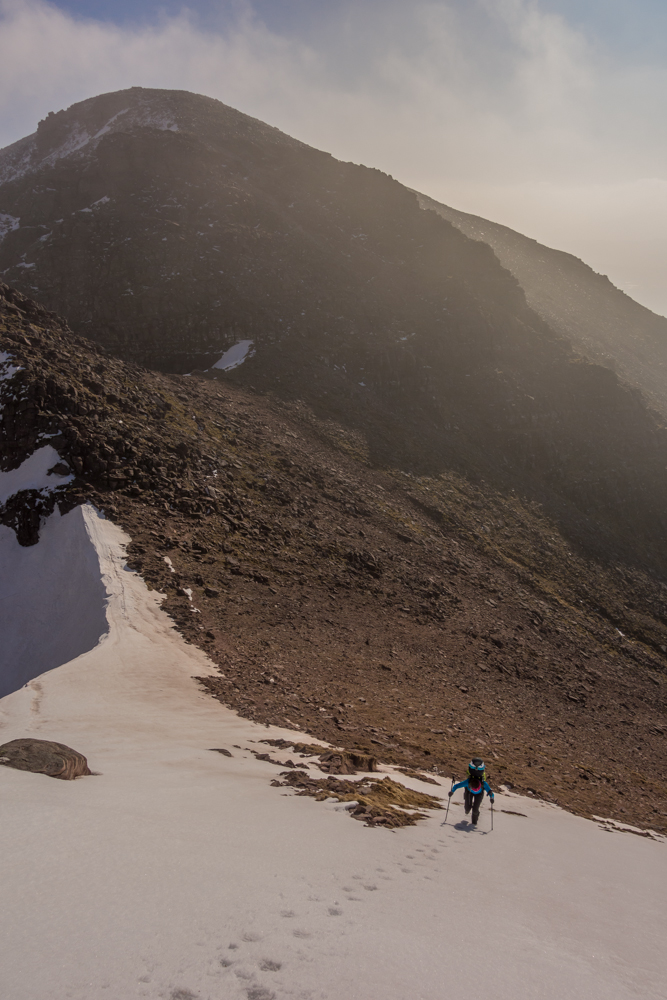 We did the traverse in an anti-clockwise direction beginning with the rounded hulk of Sail Liath on the southern side of the coire. From here easy walking leads to a few ups and downs as the ridge gradually narrows, before the sense of scale and exposure increases as the Corrag Bhuidhe pinnacles are approached. All the while the views were incredible and even a slight haze only added to the ethereal atmosphere and mystery of the great Fisherfield wilderness to the south.

The Fisherfield wilderness – some of the UK’s most remote mountains 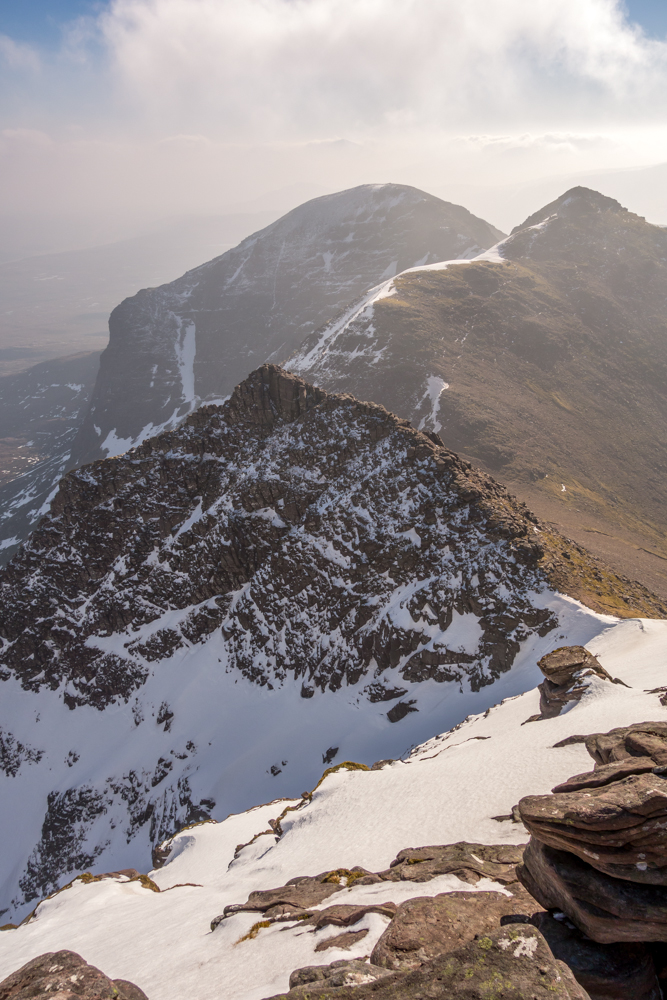 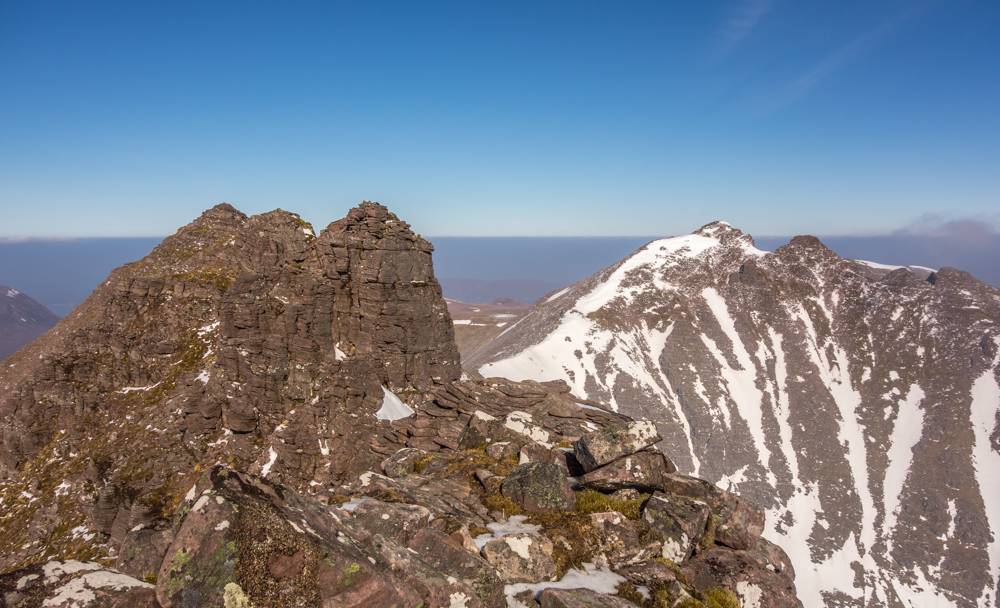 Not really knowing what to expect in terms of conditions and difficulty we had erred on the side of caution and brought a rope and small rack of gear. We got kitted up and moved together over the pinnacles placing intermittent pieces of protection on some of the trickier sections or where there were patches of snow and ice. In hindsight it was all fairly straight forward and we should have saved the weight and time and done without the gear. Sticking to the crest as closely as possible provided some spectacular scrambling although we took an easier variation on the first pinnacle as the chimney-corner was running with water. 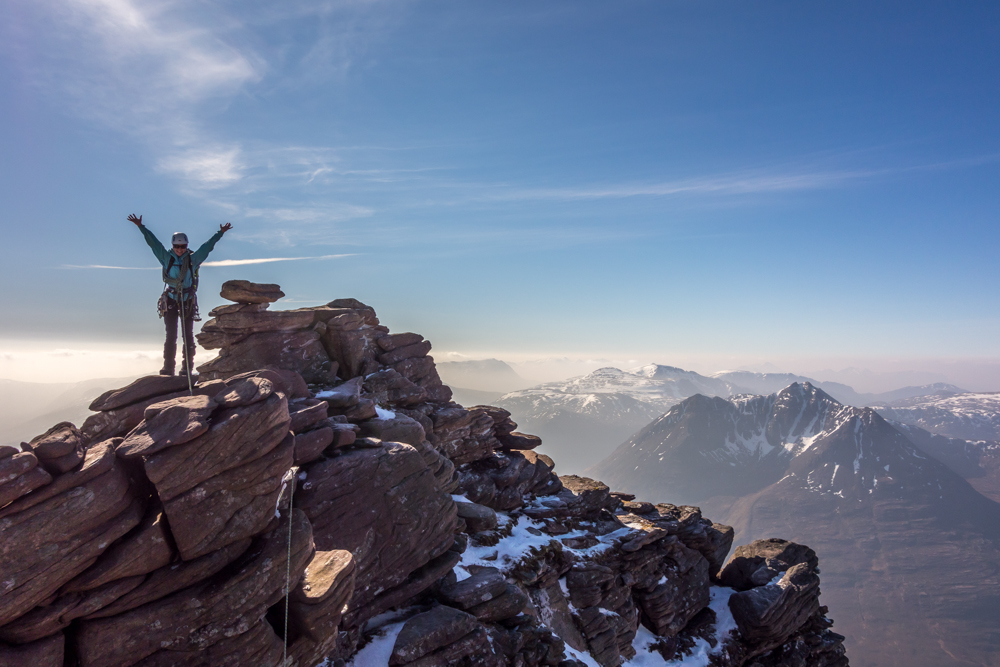 Debs absolutely loving it on the pinnacles 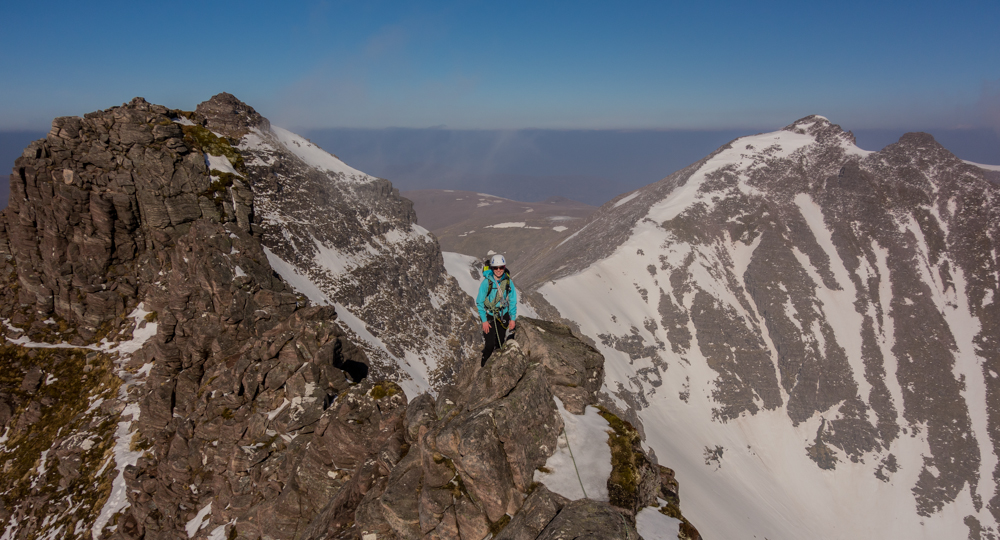 Towards the end of the scrambling a very narrow balance-beam was negotiated with care, while a glance down to the right revealed the loch, over 400 vertical metres below… More easy scrambling followed and then a quick saunter up to the first Munro – Sgurr Fiona, which provided a superb vantage point to view where we had just come from and what lay ahead. Over lunch we spied a few other teams enjoying the great weather but were very surprised to see a group of skiers appear on top of the other Munro! They proceeded to ski the narrow snow slope to the col between the two peaks and then one by one set off down the steep head-wall of the coire – very impressive stuff! 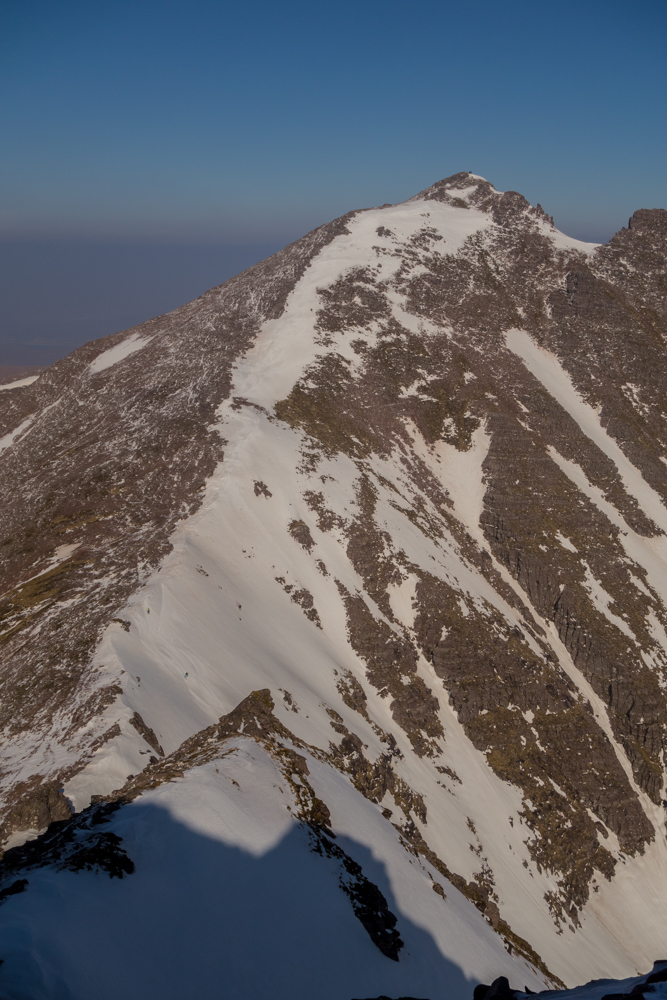 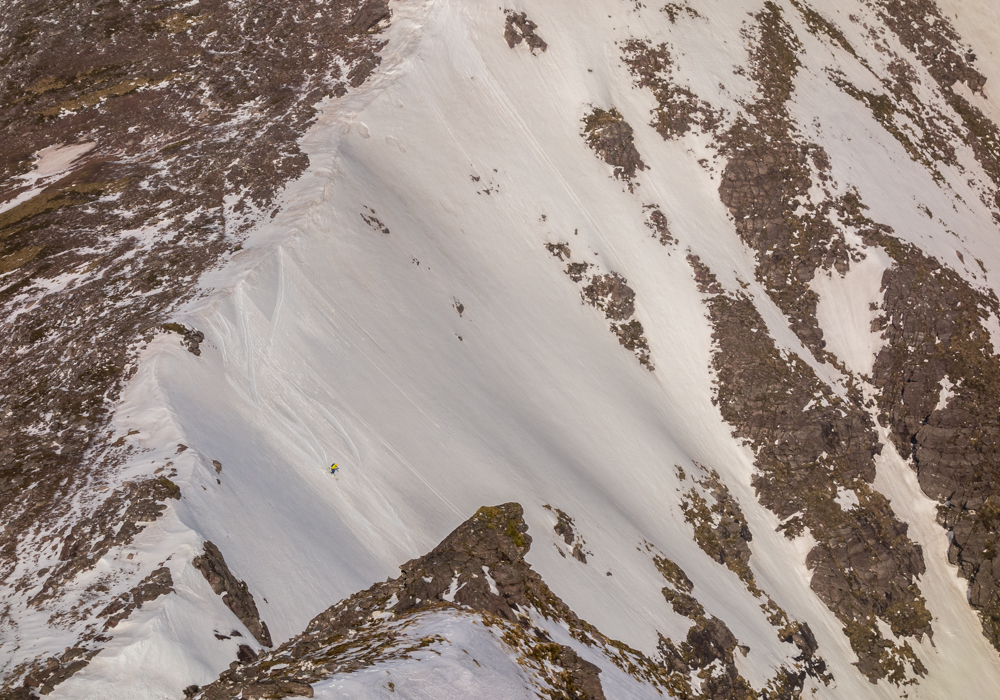 Making tracks into the coire 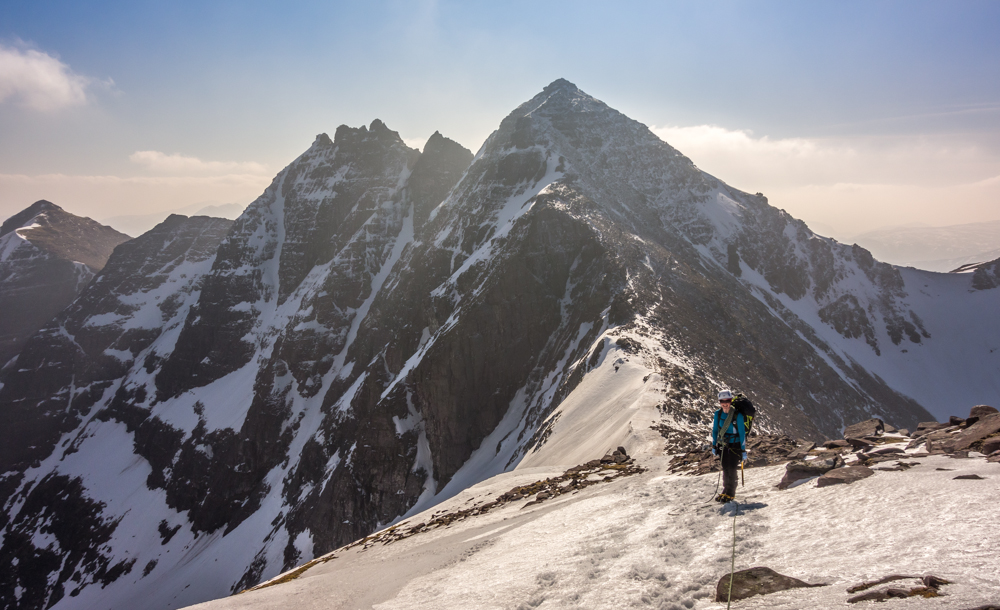 The view back to Sgurr Fiona and the pinnacles

The descent off Sgurr Fiona required crampons to safely negotiate the large patches of ice that remained on the shady north-facing slopes. Once down to the col and back into the sun, however, the snow immediately transformed into soft porridge and we were slowly cooked on the trudge up to the top of Bidein a’ Ghlas Thuill. From here we descended along the ridge to Glas Mheall Liath and thence down an interminable boulder field followed by weaving in and out of crag bands before finally reaching level ground and the path coming out of Glas Tholl. 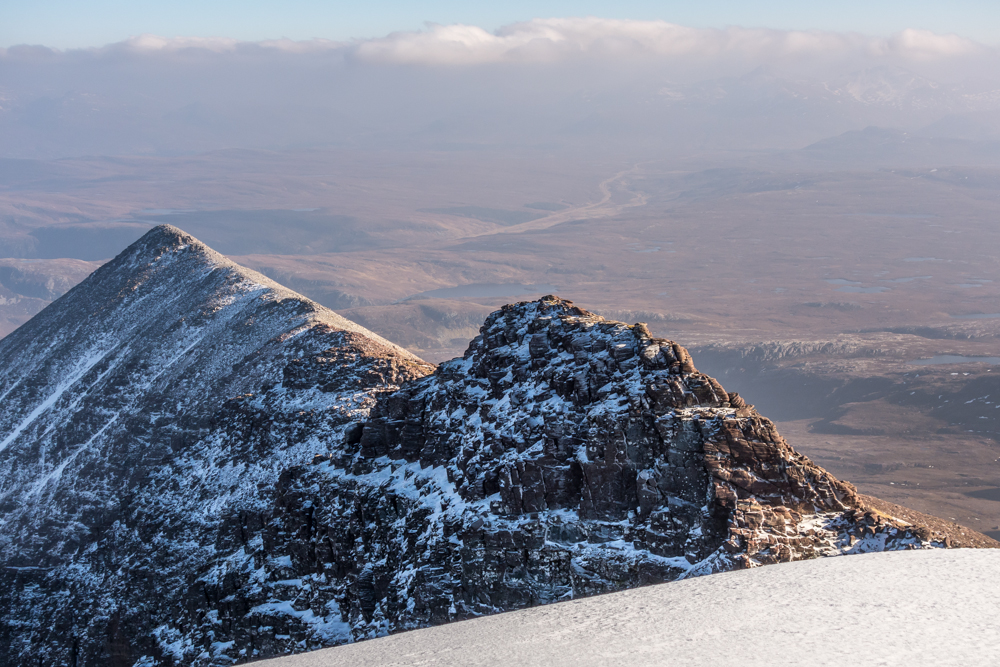 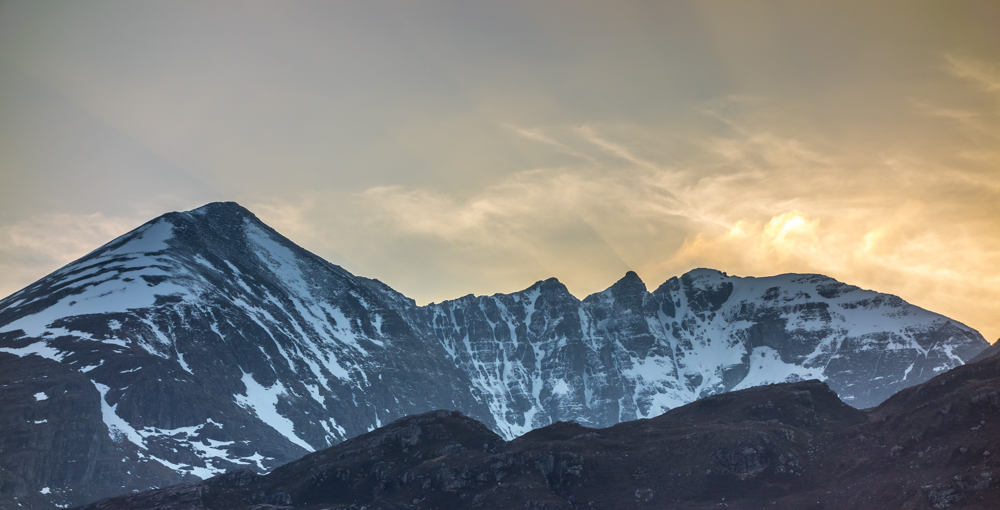 After doing battle with an extensive rhododendron thicket we emerged on to the road a fair distance from the car, only to be immediately offered a lift by a passing camper van! With our faith in humanity now fully restored, we arrived back to the car well content having had a truly amazing day on one of Scotland’s most beautiful mountains.